Comments (1)
Add to wishlistDelete from wishlist
Cite this document
Summary
This project is designed to decelerate the frequency of target behaviour of an object who tends to be aggressive to his peers in classroom and outside. The project is based on a descriptive design and it begins by describing the subject as well as outlining his behaviour. …
Download full paperFile format: .doc, available for editing
HIDE THIS PAPERGRAB THE BEST PAPER97.2% of users find it useful 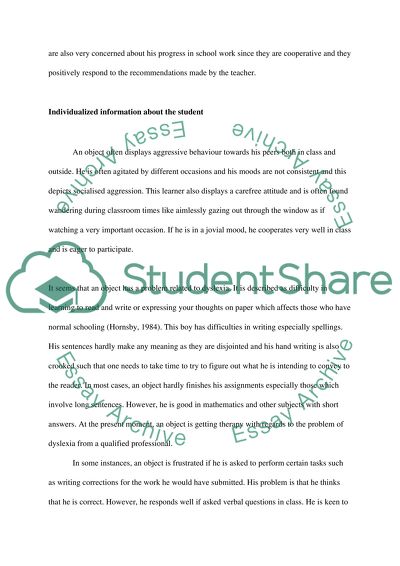 Download file to see previous pages The study gives an example of Coolican that posits to the effect that Applied Behavioural analysis (ABS)is concerned with using modern learning theory in order to modify certain behaviours especially of learners below the age of ten years. It seeks to establish a systematic body of knowledge concerning the factors which influence learning and behaviour within an educational context. The main strength displayed by an object is that he has keen interest in attending classes and he respects the educators than his peers. If asked to do something by the teacher, he will dutifully perform the task. This learner fond of art especially drawing pictures and he likes cars. He performs very well in subjects related to general knowledge. In class, he participates mostly in subject areas he has got keen interest with. He is motivated by praise for doing well in class and this compels him to put effort in his studies. He positively behaves towards the educators and can carry out any assigned task. His parents are also very concerned about his progress in school work since they are cooperative and they positively respond to the recommendations made by the teacher. An object often displays aggressive behaviour towards his peers both in class and outside. He is often agitated by different occasions and his moods are not consistent and this depicts socialised aggression. This learner also displays a carefree attitude and is often found wandering during classroom times like aimlessly gazing out through the window as if watching a very important occasion. If he is in a jovial mood, he cooperates very well in class and is eager to participate. It seems that Trevor has a problem related to dyslexia. It is described as difficulty in learning to read and write or expressing your thoughts on paper which affects those who have normal schooling (Hornsby, 1984). This boy has difficulties in writing especially spellings. His sentences hardly make any meaning as they are disjointed and his hand writing is also crooked such that one needs to take time to try to figure out what he is intending to convey to the reader. In most cases, Trevor hardly finishes his assignments especially those which involve long sentences. However, he is good in mathematics and other subjects with short answers. At the present moment, Trevor is getting therapy with regards to the problem of dyslexia from a qualified professional. In some instances, Trevor is frustrated if he is asked to perform certain tasks such as writing corrections for the work he would have submitted. His problem is that he thinks that he is correct. However, he responds well if asked verbal questions in class. He is keen to participate though at times he does not respond to the question asked. It seems that the aggressive behaviour displayed by Trevor is compounded by anxiety since he tends to believe that he is regarded as an outcast by his peers. Somehow, he is aware of his condition and this is the reason why he often behaves violently like smacking at others. At times, Trevor is not composed since he is constantly fidgeting in his seat as if not feeling comfortable. The other behaviour characteristic of him is constantly suckling his thumb and this often distracts his attention. He swears to his peers if they comment on his behaviour. Previously implemented interventions Trevor’ ...Download file to see next pagesRead More
Share:
Tags
Cite this document
(“Applied behavioural analysis project Coursework”, n.d.)
Retrieved de https://studentshare.org/psychology/1391757-applied-behavioural-analysis-project
(Applied Behavioural Analysis Project Coursework)
https://studentshare.org/psychology/1391757-applied-behavioural-analysis-project.
“Applied Behavioural Analysis Project Coursework”, n.d. https://studentshare.org/psychology/1391757-applied-behavioural-analysis-project.
Comments (1)
Click to create a comment or rate a document

an
anastacio13 added comment 9 months ago
Student rated this paper as
This document saved me today. I liked the content. It was very useful for my psychology course.

In th...
8 Pages(2000 words)Case Study
sponsored ads
Save Your Time for More Important Things
Let us write or edit the coursework on your topic "Applied behavioural analysis project" with a personal 20% discount.
GRAB THE BEST PAPER

Let us find you another Coursework on topic Applied behavioural analysis project for FREE!