Comments (0)
Add to wishlistDelete from wishlist
Cite this document
Summary
The paper describes the quality of lives among Americans. Franklin D. Roosevelt built his own 16-acre library using his own money as an avid amateur historian. The library consists of personal and family documents, states and national documents and books…
Download full paperFile format: .doc, available for editing
HIDE THIS PAPERGRAB THE BEST PAPER98.1% of users find it useful 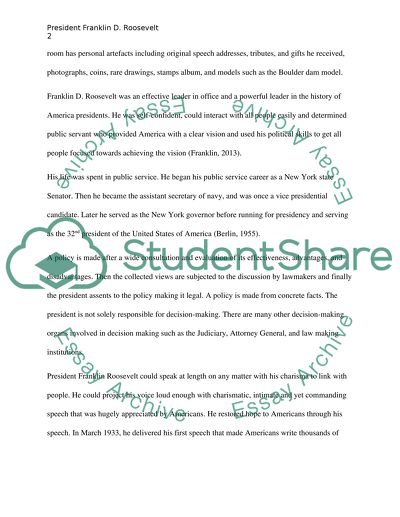 ﻿He was the 32nd America president, the only one who served for four times whose bravery to save the country from great depression, world war II and the significant role his administration had in post-world war peace redefined how federal government can do to improve quality of lives among Americans. Franklin D. Roosevelt built his own 16-acre library using his own money as an avid amateur historian. The library consists of personal and family documents, states and national documents, photos, sounds and books (McCoy, 1978).
The library is located on the shores of the Hudson River. It is four miles north of Poughkeepsie in New York and midway between Albany and New York City. The architectural design of the library represents the Dutch colonial architecture designs that symbolize the quality of endurance in difficult situations (Leland, 1955). The building is an open square made of fieldstone, one story height, and high-pitched roof. It has interactive exhibits, map room, audiovisual theatres, two Fire Chat Environments, and storerooms (Franklin D. Roosevelt Presidential Library and Museum).
The most interesting is the interactive tables. The feature animation and videos for World War II meetings and spotlights on some countries, as well as key battles. Secondly, the library is rich with memorabilia collection from that includes ship models, his 1936 Ford Phaeton, paintings, gifts, Val-Kill furniture, and his family items that take memories back to his lifetime. Thirdly, it is interesting to hear readings of the original letters written by the President Memos and opinions he made during his time (Franklin D. Roosevelt Presidential Library and Museum).
The paintings provide a reflection of battles, marine scenes, and famous vessels of his administration. 125 ship models at the naval exhibition is an awesome sight. Main exhibition room has personal artefacts including original speech addresses, tributes, and gifts he received, photographs, coins, rare drawings, stamps album, and models such as the Boulder dam model.
Franklin D. Roosevelt was an effective leader in office and a powerful leader in the history of America presidents. He was self-confident, could interact with all people easily and determined public servant who provided America with a clear vision and used his political skills to get all people focused towards achieving the vision (Franklin, 2013).
His life was spent in public service. He began his public service career as a New York state Senator. Then he became the assistant secretary of navy, and was once a vice presidential candidate. Later he served as the New York governor before running for presidency and serving as the 32nd president of the United States of America (Berlin, 1955).
A policy is made after a wide consultation and evaluation of its effectiveness, advantages, and disadvantages. Then the collected views are subjected to the discussion by lawmakers and finally the president assents to the policy making it legal. A policy is made from concrete facts. The president is not solely responsible for decision-making. There are many other decision-making organs involved in decision making such as the Judiciary, Attorney General, and law making institutions.
President Franklin Roosevelt could speak at length on any matter with his charisma to link with people. He could project his voice loud enough with charismatic, intimate and yet commanding speech that was hugely appreciated by Americans. He restored hope to Americans through his speech. In March 1933, he delivered his first speech that made Americans write thousands of appreciation letters to him for giving them hope during the great economy depression (Lorentz, 2011).
He was a true believer that Americans were destined to good quality of life and all things were achievable. His love for accountability is part of the reason he built the library to enable Americans get to know what the chief executive officers in the government were doing to steer the country against the Great Depression and World war II difficulties (Franklin, 2013).
REFERENCES
Berlin, I. (1955). President Franklin Delano Roosevelt. The Political Quarterly, 26(4), 336–344.
Franklin, D. (2013). Roosevelt Presidential Library and Museum. Renovation Diary.
Franklin D. Roosevelt Presidential Library and Museum. (n.d.). About the Museum. Retrieved February 19, 2015, from http://www.fdrlibrary.marist.edu/museum/
Leland, W. G. (1955). The Creation of the Franklin D. Roosevelt Library: A Personal Narrative. American Archivist, 18(1), 11–29.
Lorentz, P. (2011). Timeline - FDR: Day by Day. Retrieved February 19, 2015, from http://www.fdrlibrary.marist.edu/daybyday/timeline/#1941-12-07
McCoy, D. R. (1978). National Archives: America’s Ministry of Documents, 1934-1968. University of North Carolina Press. Read More
Share:
Tags
Cite this document
(“Franklin Roosevelt Against the Great Depression and World War II Research Paper”, n.d.)
Franklin Roosevelt Against the Great Depression and World War II Research Paper. Retrieved from https://studentshare.org/politics/1678642-presidential-library-essay

The Second World War was fought between 1939 and 1945 in Europe, in Russia, North Africa and in Asia. Indeed, the Second World War was lasted longer, was more volatile than the First World War. Moreover, the effects of the World War 1 contributed to the emergence of the World War 11. Children, women, men, military either participated in the war or was adversely affected by the war. Indeed, World War II was a global war that was under way by 1939 and ended in 1945 and largely involved all great powers and their armies in a show of might and dominance. The reference world powers later grouped themselves into two alliances, the Allies and the Axis. The war was fought using high technological weapons of unpredictable destructiveness...
10 Pages(2500 words)Essay

..., only Germany was left to bear the victor’s brunt. There were the territorial losses as the part of the agreement for peace with which new nations were formed taking parts from Germany and the Soviet Union. Also the Austro-Hungarian regime was divided into newer states namely Poland, Yugoslavia and Czechoslovakia. Those Germans who were parted and divided due to the formation of new states were called Ausland Deutsch (German Outsiders). So a grudge started building against the central powers in Germans and European nations. Then another reason which proved decisive in paving way for a second world war was the great depression which started in 1929. This changed the economic stature of many nations and global economy literally crashed...
7 Pages(1750 words)Research Paper

...?World War II Technology Introduction The Second World War was a unique affair in a number of aspects. For the first time, various aspects having come forth that were beyond the mankind’s imagination and comprehension. This included the kind of technology, machinery, the weapons and armory used, and many more tactics along with use of various other skills and techniques. Hence World War II is characterized by the introduction of modern warfare. It was the peak of the activities, such as industrial development and scientific introduction into machine industry and military field that enabled advancements. The build up to the usage of heavy military machinery and technology was in action and practice way earlier than the World War II set...
3 Pages(750 words)Essay

.... Others are simply honest. The Vietnam war (and other American wars) has produced a long list of books that include among others: "War of Numbers: An Intelligence Memoir", "Inventing Vietnam: The War in Film and Television", "Live from the Battlefield: From Vietnam to Baghdad, 35 Years in the World's War Zones", "Four Hours in My Lai", "Brennan's War: Vietnam 1965-1969", "The New Face of War", "Following Ho Chi Minh: The Memoirs of a North Vietnamese Colonel", "A Rumor of War", "The 13th Valley", "The Killing Zone" (Grunt Space, 2004). From this list emerged another long list of Vietnam-inspired war movies and television series. And then, there's "We Were Soldiers Once and Young." This book inspired the movie directed by Randall Wallace...
5 Pages(1250 words)Essay

Theodore Roosevelt who was Franklin Roosevelt’s cousin made a great impact on him when he became President in 1903. Theodore’s great reforms and his spectacular style of leadership left a lasting impression in the life of Franklin and this is what served as a moulding factor for his own philosophy of leadership. After attending the Columbia Law School, he took up jobs in different capacities such as working for Wall Street that mainly dealt with Corporate Law.
However, after Woodrow Wilson got elected in 1912 as President, Franklin was given the post of Assistant Secretary of the Navy. This post also served to influence Franklin’s leadership philosophy to a great extent and this influence is seen reflected in the many reforms...
6 Pages(1500 words)Annotated Bibliography

...World War II In a profound investigation of the history of the World War II, it becomes obvious that the Japanese attack on Pearl Harbor caused the U.S. to enter the war. However, the forces leading to U.S. engagement were more complex than just reaction to the attack. Thus, it is essential to realize that the Victory Program, drawn up by the Army and Navy in 1941, helped prepare the U.S. for entry into the war. Significantly, the Victory Program outlines the U.S. strategy by which they could defeat Germany if Soviet Russia fell. The Victory Program was a military strategy calling for an army of 8,795,658 men, a figure remarkably close to the Army’s eventual strength, to join the war. As Weigley (1977) purports, “American strategic...
1 Pages(250 words)Essay

... Franklin D. Roosevelt Introduction Franklin Delano Roosevelt can be regarded as one of the greatest leaders of the 20th century who made notable contributions to the world history. His contributions were more relevant to the United States, a country he governed for 12 years during a worse time in American history. Roosevelt was the 32nd American president during the Great Depression era and World War II. Under his leadership, America was able to overcome numerous challenges and emerge one of the biggest economic and political powers of the 20th century (Coker 8). Roosevelt was a democrat and served the Americans in several capacities. Throughout his career, Roosevelt gained immense success in all the positions he held; this made him one...
8 Pages(2000 words)Research Paper

...An Analysis of a World War II Issue Teacher               An Analysis of a World War II Issue The article en d “A Story About World War II That China Would Like You to Hear,” published at http://www.theatlantic.com/international/archive/2012/06/a-story-about-world-war-ii-that-china-would-like-you-to-hear/259084/, is definitely a wake-up call to the growing tension between the United States and China. The article discusses how WWII U. S. Army Pilot Glen Beneda’s plane crashed in China in 1944 and how he was taken care of by the Chinese people (Friedersdorf, 2012). The article focused on a rather trivial piece of information related to WWII when the United States and Japan were at war, and where China was an ally of the former. The article...
1 Pages(250 words)Essay

The history of human civilization, especially the field of political leadership, has helped in yielding several great leaders but the 32nd President of the United States, Franklin Delano Roosevelt (1882-1945) has attained a special position of his own from his understanding of politics, people’s requirement from the government and leading the nation at the topmost position in the scenario of global politics by overcoming all the consequential constraints from the socio-cultural, socio-political and socio-economic perspectives.
Despite his physical disabilities, Roosevelt’s self-confidence and optimism helped him to a great extent in overcoming all the situational obstacles. As a leader, he was highly successful in...
7 Pages(1750 words)Term Paper
sponsored ads
Save Your Time for More Important Things
Let us write or edit the research paper on your topic "Franklin Roosevelt Against the Great Depression and World War II Difficulties" with a personal 20% discount.
GRAB THE BEST PAPER

Let us find you another Research Paper on topic Franklin Roosevelt Against the Great Depression and World War II Difficulties for FREE!