The Class and television in the UK - Essay Example

Comments (0)
Add to wishlist Delete from wishlist
Cite this document
Summary
The Committee on Broadcasting of 1960 (also known as the Pilkington Committee) was convened to examine the then current state of television broadcasting, examining both the BBC and ITV. The committee reported in June 1962, and its results were in two contrasting parts: whilst the committee showed general approval of the BBC, the ITV companies were criticised on a number of fronts…
Download full paper File format: .doc, available for editing
HIDE THIS PAPERGRAB THE BEST PAPER98.5% of users find it useful 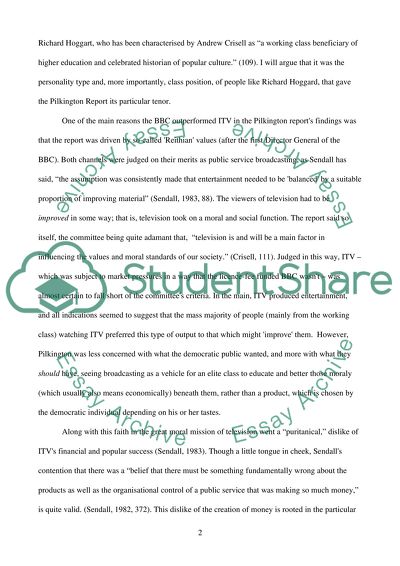 Extract of sample "The Class and television in the UK"

Download file to see previous pages On the other hand, commercial television was to be regulated more firmly (especially in regard to advertising and content) and the game shows that had won ITV high ratings over the last few years were to have their prize monies slashed. The disparity between Pilkington's judgements of the two channels was quite clear.
This disparity was firmly and inextricably interwoven with the class structure of Britain at the time of the report, and television's place in that structure. By 1962 the working class was becoming increasingly affluent, riding the post-war industrial boom and supported by the new welfare provision put in place by Clement Attlee's reforming government of 1945-51. Between 1951 and 1958 real wages rose by 20% (Curran, 204), this growth favouring principally the lower middle classes. This increased prosperity naturally converted into an increase in the number of television sets bought: in 1951 there were 586,000 licences, which grew by nearly twenty-fold to 11,659,000 (Sendall, 1982, 370). This increase was almost certainly driven by the availability of the new ITV. As well as greater prosperity for the working class, there was also increased social mobility, again due to the Attlee government and the grammar school system it had put in place in the late 1940s. An example of this new trend was a member of the Pilkington Committee itself, Richard Hoggart, who has been characterised by Andrew Crisell as "a working class beneficiary of higher education and celebrated historian of popular culture." (109). I will argue that it was the personality type and, more importantly, class position, of people like Richard Hoggard, that gave the Pilkington Report its particular tenor.
One of the main reasons the BBC outperformed ITV in the Pilkington report's findings was that the report was driven by so-called 'Reithian' values (after the first Director General of the BBC). Both channels were judged on their merits as public service broadcasting, as Sendall has said, "the assumption was consistently made that entertainment needed to be 'balanced' by a suitable proportion of improving material" (Sendall, 1983, 88). The viewers of television had to be improved in some way; that is, television took on a moral and social function. The report said so itself, the committee being quite adamant that, "television is and will be a main factor in influencing the values and moral standards of our society." (Crisell, 111). Judged in this way, ITV - which was subject to market pressures in a way that the licence-fee funded BBC wasn't - was almost certain to fall short of the committee's criteria. In the main, ITV produced entertainment, and all indications seemed to suggest that the mass majority of people (mainly from the working class) watching ITV preferred this type of output to that which might 'improve' them. However, Pilkington was less concerned with what the democratic public wanted, and more with what they should have, seeing broadcasting as a vehicle for an elite class to educate and better those moraly (which usually also means economically) beneath them, rather than a product, which is chosen by the democratic individual ...Download file to see next pages Read More
Share:
Tags
Cite this document
(“The Class and television in the UK Essay Example | Topics and Well Written Essays - 1000 words”, n.d.)
Retrieved de https://studentshare.org/politics/1510866-the-class-and-television-in-the-uk

(The Class and Television in the UK Essay Example | Topics and Well Written Essays - 1000 Words)
https://studentshare.org/politics/1510866-the-class-and-television-in-the-uk.

“The Class and Television in the UK Essay Example | Topics and Well Written Essays - 1000 Words”, n.d. https://studentshare.org/politics/1510866-the-class-and-television-in-the-uk.
Comments (0)
Click to create a comment or rate a document

CHECK THESE SAMPLES OF The Class and television in the UK

... not been introduced to be in our homes by now? They are there, either this way or that. They are present in deviations in our living rooms, especially is UK. Portable devices are also a part of this type of television these days. This is not the limit, even sky is not the limit, of televisions and that they will be much more admired than all the other types introduced earlier; that depends on marketing efforts and the usage quality in the end. The main point behind this competition is providing the customer with superior quality and satisfaction with the product which he is looking for. This is not the game of science only but the game of mind as well. viii Television technology has grown from time to time and many usage categories have...
6 Pages (1500 words) Coursework

...1. Assess the key macro factors that have influenced the UK grocery retailing industry since the early 1960s. The concept of organisational change is inherently intertwined with external threats and opportunities, which businesses must adapt to as part of strategic planning to continue long term growth. Senior and Fleming argue that the concept of organisational change has many faces, namely “convergent changes and transformational change that is organisation wide and characterised by radical shifts in strategy, mission values and associated changes of structures and systems” (In Thompson & Martin, 2005, p.41). Moreover, Johnson et al highlight that external macro-economic factors intrinsically impact strategy management and without...
13 Pages (3250 words) Assignment
sponsored ads
Save Your Time for More Important Things
Let us write or edit the essay on your topic "The Class and television in the UK" with a personal 20% discount.
GRAB THE BEST PAPER

Let us find you another Essay on topic The Class and television in the UK for FREE!