Comments (0)
Add to wishlistDelete from wishlist
Cite this document
Summary
The author of the paper titled "The Impact of the Shortage of Affordable Housing on Homelessness" argues that creating a national trust fund for the provision of affordable housing will also help in dealing with the problem of shortage of affordable housing. …
Download full paperFile format: .doc, available for editing
HIDE THIS PAPERGRAB THE BEST PAPER91.3% of users find it useful 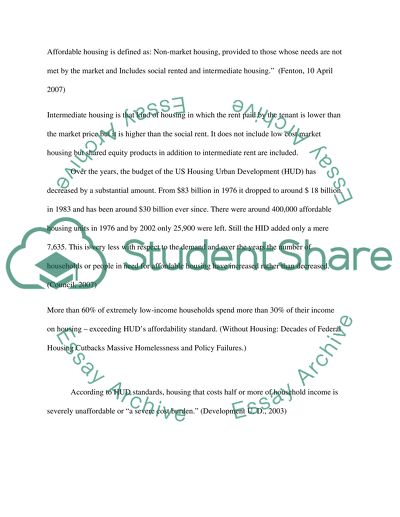 Download file to see previous pages Affordable housing can be defined as a housing scheme that costs a household a maximum of 30% of their incomes. If the cost of housing increases beyond 30% then the families are considered to be in a position where they have difficulty in affording all the basic necessities of life which includes food, shelter, medical care, and transport facilities. In the United States, a number as large as 2 million are burdened with basic necessities of life as they are paying more than 50% for their housing cost out of their annual salary. This is to say that a household with one bread owner who earns a minimum wage can in no way afford a two-bedroom house/apartment in accordance with the prices prevailing in the market. (Development, 2008 )

Intermediate housing is that kind of housing in which the rent paid by the tenant is lower than the market price but it is higher than the social rent. It does not include low-cost market housing but shared equity products in addition to intermediate rent are included.

Over the years, the budget of the US Housing Urban Development (HUD) has decreased by a substantial amount. From $83 billion in 1976 it dropped to around $ 18 billion in 1983 and has been around $30 billion ever since. There were around 400,000 affordable housing units in 1976 and by 2002 only 25,900 were left. Still, the HID added only a mere 7,635. This is very less with respect to the demand and over the years the number of households or people in need of affordable housing has increased rather than decreased. (Council, 2007)
More than 60% of extremely low-income households spend more than 30% of their income on housing - exceeding HUD's affordability standard. (Without Housing: Decades of Federal Housing Cutbacks Massive Homelessness and Policy Failures.)

According to HUD standards, housing that costs half or more of household income is severely unaffordable or "a severe cost burden." (Development U. D., 2003)
The cost of renting a house is beyond the financial capacity of a lot of people in the United States today. As the income remains constant, the housing rents have shot up. Hence there is a big gap between an increase in spending and more or less no significant increase in the amount of money earned by individuals making it more difficult for the low-income brackets to afford a house on a rental basis. The shortage of affordable housing increased to a great extent the risk of homelessness.

Some of the policies on affordable housing include the local authorities should in advance plan out the housing needs of their community or jurisdiction including those who cannot afford it easily. A community should be planned in such a way that it should have a mix of housing that accommodates those who can afford bid houses as well as those sectors that need affordable prices.

Keeping in view the high level of daily usage of social networking sites like Facebook, Twitter, YouTube, Google+ and LinkedIn, companies have taken advantage of them by making ‘pages’ on Facebook which are accessible by the millions of Facebook users. The pages can be thought of as modern yellow page records. Twitter offers a ‘tweet’ option as a message which can be seen automatically on the homepages of those who follow it, and those who don’t follow it can also access them by visiting the company’s twitter profile. These can be used to catch the eyes of followers for new promotions and packages. By using the hashtag option (a # sign followed by a word or phrase) users can come across the comp...
6 Pages(1500 words)Term Paper

The housing industry is divided into residential, commercial and industrial segments. Economists define supply in terms of service units, that is, a physical unit can be deconstructed into the services that it helps provide. These housing unit services are considered as an unobservable theoretical construct. Housing stock depreciates making it qualitatively different from a brand new constructed building.
The owner, user/owner and renter comprise the demand side of the housing market while the renovators and developers comprise the supply side of the market. In order to implement the simple demand and supply analysis to the housing markets, several modifications have to be made to the standard microeconomic procedures and ass...
8 Pages(2000 words)Research Paper
sponsored ads
Save Your Time for More Important Things
Let us write or edit the essay on your topic "The Impact of the Shortage of Affordable Housing on Homelessness" with a personal 20% discount.
GRAB THE BEST PAPER

Let us find you another Essay on topic The Impact of the Shortage of Affordable Housing on Homelessness for FREE!