Comments (0)
Add to wishlistDelete from wishlist
Cite this document
Summary
This paper declares that the American people desired to elect a leader who would lead monumental changes that could help resolve the Great Depression’s negative impacts on employment and businesses. The people selected Franklin Delano Roosevelt as president in the 1932 election…
Download full paperFile format: .doc, available for editing
HIDE THIS PAPERGRAB THE BEST PAPER91.5% of users find it useful 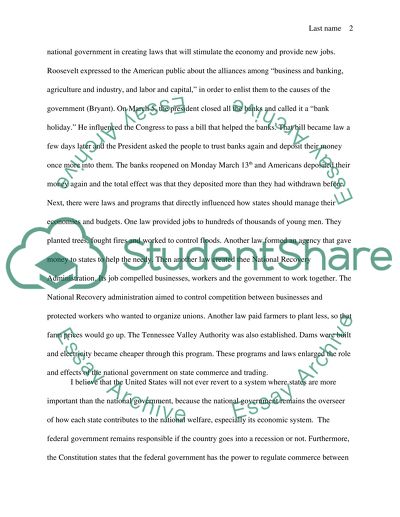 ﻿ In 1932, the American people desired to elect a leader who would lead monumental changes that could help resolve the Great Depression’s negative impacts on employment and businesses. The people selected Franklin Delano Roosevelt as president in the 1932 election, a man who would try anything until it works, so that he could help reform the economic structure of the United States. He formed the New Deal, a wide range of economic programs implemented in the United States between 1933 and 1936. The New Deal had three goals: recovery from the depression, relief for affected individuals, and reform of the economic system. Majority of its legislation followed these purposes (Bryant). The New Deal changed the role of the national government, by expanding the power of the Federal Government and making it more responsible for the general welfare of the states.
Since the U.S. became “united,” states enjoyed latitude in making laws and programs for their specific state needs and concerns. The Great Depression showed, however, that each state, or more so, a few ones, can generally impact the whole nation’s economic conditions. As a result, Roosevelt and his allies are convinced that they must change the national government from being a passive parent to a more aggressive parent handling the economy as a whole. After all, the Constitution states that the federal government has the power to regulate commerce between states and international trade and that it is authorized to generate laws that support the Constitution. Though the New Deal has been criticized as unconstitutional, it proved to greatly enhance the powers of the national government.
During the New Deal of the Roosevelt administration, from 1933 to early 1935, the main goals were recovery and relief. The president and his advisers stressed the importance of the national government in creating laws that will stimulate the economy and provide new jobs. Roosevelt expressed to the American public about the alliances among “business and banking, agriculture and industry, and labor and capital,” in order to enlist them to the causes of the government (Bryant). On March 5, the president closed all the banks and called it a “bank holiday.” He influenced the Congress to pass a bill that helped the banks. That bill became law a few days later and the President asked the people to trust banks again and deposit their money once more into them. The banks reopened on Monday March 13th and Americans deposited their money again and the total effect was that they deposited more than they had withdrawn before. Next, there were laws and programs that directly influenced how states should manage their economies and budgets. One law provided jobs to hundreds of thousands of young men. They planted trees, fought fires and worked to control floods. Another law formed an agency that gave money to states to help the needy. Then another law created thee National Recovery Administration. Its job compelled businesses, workers and the government to work together. The National Recovery administration aimed to control competition between businesses and protected workers who wanted to organize unions. Another law paid farmers to plant less, so that farm prices would go up. The Tennessee Valley Authority was also established. Dams were built and electricity became cheaper through this program. These programs and laws enlarged the role and effects of the national government on state commerce and trading.
I believe that the United States will not ever revert to a system where states are more important than the national government, because the national government remains the overseer of how each state contributes to the national welfare, especially its economic system. The federal government remains responsible if the country goes into a recession or not. Furthermore, the Constitution states that the federal government has the power to regulate commerce between states and international trade and that it is authorized to generate laws that support the Constitution. Hence, the national government will remain more important that the state governments, where the national economy is concerned.
Work Cited
Bryant, Joyce. The Great Depression and New Deal. Web. 4 July 2004 . Read More
Share:
Tags
Cite this document
(“New Deal: State Government versus National Government Essay”, n.d.)
Retrieved from https://studentshare.org/politics/1427280-new-deal-state-government-versus-national-government

It has as a central idea that whatever else Man does will ultimately end up as nothing. This is the cen...
8 Pages(2000 words)Term Paper
sponsored ads
Save Your Time for More Important Things
Let us write or edit the essay on your topic "New Deal: State Government versus National Government" with a personal 20% discount.
GRAB THE BEST PAPER

Let us find you another Essay on topic New Deal: State Government versus National Government for FREE!