Comments (0)
Add to wishlistDelete from wishlist
Cite this document
Summary
This essay describes Winston Churchill's difficult path to a great speaker. Churchill believed that there is no more valuable human talent than the talent of rhetoric and noted that public speaking skills are not the gift of nature but they can be developed…
Download full paperFile format: .doc, available for editing
HIDE THIS PAPERGRAB THE BEST PAPER92.6% of users find it useful 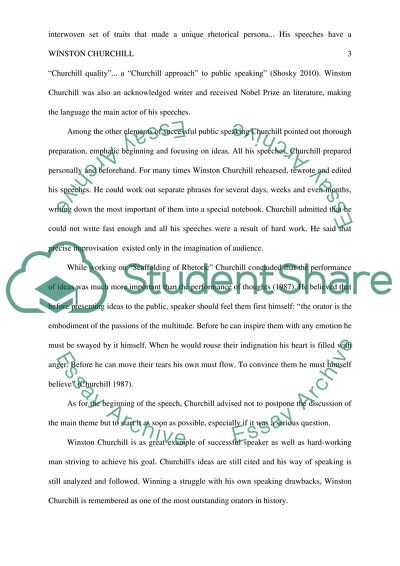 ﻿
“Speak Like Churchill, Stand Like Lincoln”, James Humes said. Winston Churchill is considered to be one of the greatest public speakers of the epoch. Churchill believed that there is no more valuable human talent than the talent of rhetoric and noted that public speaking skills are not the gift of the nature but they can be developed (Churchill 1987).
Winston Churchill made a long and difficult path until he became a great speaker. “He did not have a melodious, engaging, supple voice, with great dexterity in emphasis, rate and volume. Instead, his vocal delivery was actually poor, deprived of the conversational quality of a Franklin Roosevelt, or a rapier like display of meaningful variety and pregnant pauses, like Tony Blair or William Hague”, John Shosky explained (2010). However, he still remains one of the most memorable orators of the time: “The content of his speeches held a nation together during extreme peril and mobilised it for years of sacrifice and danger... His words helped define his time. The stirring language continues to inspire later generations. When anyone talks about the profound power of a speech, Churchill is probably mentioned more than any other speaker... And so people study his speeches for insight into greatness” (Shosky 2010).
Churchill managed to turn his speaking deficiencies into means of successful rhetoric speech. In his essay “Scaffolding of Rhetoric” Churchill wrote: “Sometimes a slight and not unpleasing stammer or impediment has been of some assistance in securing the attention of the audience” (1879). Over the years of training, Churchill learned to use his voice with the highest level of mastery. He skilfully utilized the means of language such as detailed descriptions, stately sentences, metaphors, analogies, humor, resounding perorations, etc. as well as means of voice performed by influential intonation, which became a part of so-called Churchill's “personal style”: “There was imagery, colour and history. Churchill crafted an interwoven set of traits that made a unique rhetorical persona... His speeches have a
“Churchill quality”... a “Churchill approach” to public speaking” (Shosky 2010). Winston Churchill was also an acknowledged writer and received Nobel Prize an literature, making the language the main actor of his speeches.
Among the other elements of successful public speaking Churchill pointed out thorough preparation, emphatic beginning and focusing on ideas. All his speeches, Churchill prepared personally and beforehand. For many times Winston Churchill rehearsed, rewrote and edited his speeches. He could work out separate phrases for several days, weeks and even months, writing down the most important of them into a special notebook. Churchill admitted that he could not write fast enough and all his speeches were a result of hard work. He said that precise improvisation existed only in the imagination of audience.
While working on “Scaffolding of Rhetoric” Churchill concluded that the performance of ideas was much more important than the performance of thoughts (1987). He believed that before presenting ideas to the public, speaker should feel them first himself: “the orator is the embodiment of the passions of the multitude. Before he can inspire them with any emotion he must be swayed by it himself. When he would rouse their indignation his heart is filled with anger. Before he can move their tears his own must flow. To convince them he must himself believe” (Churchill 1987).
As for the beginning of the speech, Churchill advised not to postpone the discussion of the main theme but to start it as soon as possible, especially if it was a serious question.
Winston Churchill is as great example of successful speaker as well as hard-working man striving to achieve his goal. Churchill's ideas are still cited and his way of speaking is still analyzed and followed. Winning a struggle with his own speaking drawbacks, Winston Churchill is remembered as one of the most outstanding orators in history.
References
Churchill, S. W. (1987, November). The Scaffolding of Rhetoric. Retrieved from https://www.winstonchurchill.org/images/pdfs/for_educators/THE_SCAFFOLDING_OF_RHETORIC.pdf
Shosky, J. (2010, June 18). How to Speak Like Churchill. Retrieved from http://www.totalpolitics.com/campaigns/4698/how-to-speak-like-churchill.thtml Read More
Share:
Tags
Cite this document
(“Winston Churchill Essay Example | Topics and Well Written Essays - 250 words - 1”, n.d.)
Winston Churchill Essay Example | Topics and Well Written Essays - 250 words - 1. Retrieved from https://studentshare.org/people/1655713-essay

CHECK THESE SAMPLES OF Winston Churchill

... and kind heart, his pugnacious, combative and sensual, at the same time, character allowed him finally to achieve the outstanding success. Churchill always remained true to his principles, never receded. He did not doubt his decisions and his personal way of decision-making; he was not afraid to step over political correctness or even insult or offend someone for country’s good. A matchless politician, persuasive public speaker, creative writer and memoirist, Winston Churchill was a complex character with its very strong points, but with very evident, pronounced weaknesses. Even his virulent critics acknowledge that he diligently served England and is one of the greatest sons of the Albion. He became a legend and role model, as such values...
4 Pages(1000 words)Essay

... which made some people move away from him. But this was no surprise – the kind of childhood that he had gotten was expected to have some sort of effect upon the poor boy, and this is what happened. Later on Winston’s father dies after which it seemed that Winston decided to get himself together and stand up for himself. He becomes a soldier following which he starts writing and then gets interested in politics. He created himself and then maintained too. The movie is a great watch. It is an absolutely correct depiction of Winston Churchill’s life. William Manchester’s views regarding the film say that he finds it “sterile and devoid of conflict”. In the film’s defence it can be said that it was only portraying the real life of Winston...
4 Pages(1000 words)Essay

.... This includes the achievements, teachings, struggles and the lessons that he made the people learn. All the pertinent data and information that can define him as a person are captured to be able to achieve an understanding of the life that he had led and the decisions that he had made. Winston Churchill was born in the Oxformshire, England, United Kingdom on the 30th of November 1874. He is the son of an English father, Lord Randolph Churchill and an American mother. He is of British nationality that made his contributions to the society until the 24th of January in 1965 when he died at the age of 90 at the Hyde Park, London in England. He is a descendant of the...
8 Pages(2000 words)Essay

... the High Seas Fleet, the operation would make no difference to the numerical superiority of the Royal Navy. The failure of its execution nearly destroyed his political career, and tarnished his reputation in the eyes of many contemporaries. For Great Britain, June 1940 was turning into one of the worst months of its modern history. After the swift fall of Belgium, Holland and France via the German Blitzkrieg, the British found themselves completely alone in confronting what seemed to be the invincible war machine of the Third Reich. Many asked themselves at this time whether Winston Churchill, who had only been Prime Minister for a few weeks, was the right person to lead the nation at such a difficult time. In his favour he had his...
12 Pages(3000 words)Essay

Was Winston Churchill the greatest leader in the 20th century

.... The paper would examine Churchill’s broad vision and lofty ideologies pertaining to his administration, his political clout as a leader and the manner in which he faced and handled the different problems that stood in his path. It would also form an analysis of how effective his leadership was and the impact it created on the country’s progress. In this context, the paper would also attempt to discuss the varied attributes of Sir Winston Churchill, highlighting his exemplary personality and the strategic and inspiring decisions he had to make as the leader of his country and validate and conclude whether this fact of being one of the greatest leaders of the 20th century was true or...
6 Pages(1500 words)Essay

Assess and Evaluate Winston Churchill as a Foreign Policy Leader

...﻿ Winston ChurchillWinston Churchill (1874 – 1965), a British politician, was the Prime Minister of the United Kingdom during 1940 and 1945 and for another four years from 1951 till 1955. He supported the British Empire strongly and was one of the most well-known wartime leaders during the 20th century. Churchill saw himself as the one to protect the world from German aggression. British and American bomb planes attacked Dresden (a German city) during February 1945. It was apparent that the Germans were losing, however, the Allies aimed at killing as many Germans as was possible. They employed fire bombs since they knew that the buildings were old and constructed from wood. Churchill still wanted...
1 Pages(250 words)Essay

... is not enough, Churchill also made immense contributions in Britain’s military progress. In this light, because of his impeccable performance in military, Churchill rose up through military ranks and the culmination of his progress was him serving as the First Lord of the Admiralty from 1911 to 1915 (DEste, 993). Works Cited DEste, Carlo. “Winston Churchill.” The Journal of Military History, 68.3 (2004): 993. Print Wakely, Elizabeth and Jerome, Carson. “Historical recovery heroes - Winston Churchill.” Mental Health and Social Inclusion, 14.4 (2010): 36 – 39. Print Younger, Kenneth. “Winston Churchill.” International Affairs (Royal Institute of International Affairs 1944- ), 51.1 (1975): 134 – 135. Print...
2 Pages(500 words)Essay

..., 2002). After seeing combat Winston Churchill came to the city life and took up politics. His political career has been transcended in history as both rebellious and inconsistent till the time of world war two. In 1900, Churchill got a position ion the parliament form the conservative party side from Oldham. His support for the conservative party lasted for about four years and in 1904 Churchill joined the liberal party- which he believed was coherent to his views on economic policies and international relations. He served as member of parliament, representing the liberal party for another twelve years (Keegan, 2002). During this time he was appointed on many leading positions such as the President of board of trade and Home secretary...
18 Pages(4500 words)Essay

...is entitled to understand archetypes from the ancient types to the modern types. Archetypes have the ability to initiate change especially when used under exaggerated forums. In order to explain the change archetypes can bring to the community, the paper focuses on analyzing Winston Churchill’s archetypal characteristics. It evaluates the effects these characters under archetypal assimilations have in the modern ways of life. Introduction The paper focuses on the villain archetypal character of Winston Churchill. Archetypes especially those polarizing ones have (examples being the...
13 Pages(3250 words)Research Paper
sponsored ads
Save Your Time for More Important Things
Let us write or edit the essay on your topic "Winston Churchill" with a personal 20% discount.
GRAB THE BEST PAPER

Let us find you another Essay on topic Winston Churchill for FREE!