Comments (0)
Add to wishlistDelete from wishlist
Cite this document
Summary
Social Work practice theory does not seek to explain, the world, individuals, communities or group dynamics. Social Work theories are concerned with understanding the individual in their context and promoting change with the individual and/or their context…
Download full paperFile format: .doc, available for editing
HIDE THIS PAPERGRAB THE BEST PAPER91.2% of users find it useful 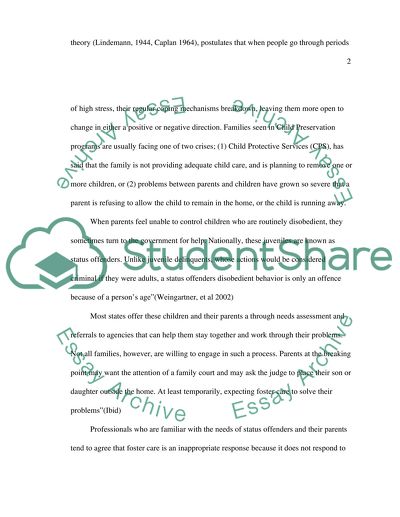 Download file to see previous pages According to Howe (1997), a clear theoretical perspective guides and influences practice in five key areas: (1) observation, which tells us what to see, and what to look out for; (2) description, which provides a conceptual vocabulary and framework within which observations can be arranged and organized; (3) explanation, which suggests how different observations might be linked and connected, it offers possible casual relationships between one event and another; (4) prediction, which indicates what might happen next and (5) intervention, which suggests things to do to bring about change. Of course, different theories lead to different observations and explanations. Social Work practice theories provide explanations and/or guidance for practice. Social Work practice theory does not seek to explain, the world, individuals, communities or group dynamics. Social Work theories are concerned with understanding the individual in their context and promoting change with the individual and/or their context. What do we mean by crisis? ”crisis is not stress, often these words are used interchangeably. Crisis contains a growth- promoting possibility – it can be a catalyst. Crisis disturbs old established patterns of responding”(Wright 1991). Crisis can be seen in at least three different forms; a hazardous event, a decision making event, or a danger and opportunity. Thus, crisis is a time for decision making in a situation presenting either danger or opportunity....
said that the family is not providing adequate child care, and is planning to remove one or
more children, or (2) problems between parents and children have grown so severe that a
parent is refusing to allow the child to remain in the home, or the child is running away.
When parents feel unable to control children who are routinely disobedient, they
sometimes turn to the government for help. Nationally, these juveniles are known as
status offenders. Unlike juvenile delinquents, whose actions would be considered
criminal if they were adults, a status offenders disobedient behavior is only an offence
because of a person's age"(Weingartner, et al 2002)
Most states offer these children and their parents a through needs assessment and
referrals to agencies that can help them stay together and work through their problems.
Not all families, however, are willing to engage in such a process. Parents at the breaking
point may want the attention of a family court and may ask the judge to place their son or
daughter outside the home. At least temporarily, expecting foster care to solve their
problems"(Ibid)
Professionals who are familiar with the needs of status offenders and their parents
tend to agree that foster care is an inappropriate response because it does not respond to
the needs which prompted parents to seek help. Traditionally, foster care is designed to
keep children and parents apart, not to engage the family as a whole through services
such as family counseling and mediation"(Russell et al)
3
"Around the country, parents grievances with their ...Download file to see next pagesRead More
Share:
Tags
Cite this document
(“Social Intervention Planning Assignment Example | Topics and Well Written Essays - 2500 words”, n.d.)
Retrieved from https://studentshare.org/people/1534173-social-intervention-planning

... of social welfare as shown by the triangle marked abc. Social welfare in health care is bound to increase as producers tend to produce more as a result of the subsidy while consumers tend to consume more because some of the benefits of the subsidy are passed on to consumers by producers (Hazlitt, 1988, p.198). Health outcomes associated with the above action of the government can be measured in conformity with a number of positive effects. For instance a series of positive outcomes including a healthier nation, greater productivity, longevity and a bigger Gross Domestic Product could add to incremental values by increasing the relative effectiveness of intervention by the government. If the free market forces of demand and supply...
8 Pages(2000 words)Case Study

A holistic understanding why organizations can have such lasting effect on the society may be drawn from Dawe’s (1970; p.214) explanation of sociology that identifies two distinct aspects, sociology of social...

Soon a retail industry was built up and the community began to grow and is considered to be a society with a civic nature (Learning Communities in Education and Training, 2009). The community of Broken Hill can be considered to be highly diverse with a census that was conducted in the area in 1996 showed that out of the then population there were 961 people who came from overseas and a large amount of those was not from an English speaking nation. The large composition of the population in the community at the time was aboriginals or Torres Strait Islanders. Broken Hill thus shows a varying ethnic community and a diverse mindset considering a large proportion of the people are from nations such as Greece, Malta and even Italy (Lea...
6 Pages(1500 words)Case Study
sponsored ads
Save Your Time for More Important Things
Let us write or edit the assignment on your topic "Social Intervention Planning" with a personal 20% discount.
GRAB THE BEST PAPER

Let us find you another Assignment on topic Social Intervention Planning for FREE!