Comments (0)
Add to wishlistDelete from wishlist
Cite this document
Summary
Throughout history there has been a debate on the manner in which human beings become intelligent. The debate rages on today as we still have no definitive answer to this age old question. Arthur R. Jenson sought to solve this issue with his 1969 paper on the subject…
Download full paperFile format: .doc, available for editing
HIDE THIS PAPERGRAB THE BEST PAPER92.8% of users find it useful 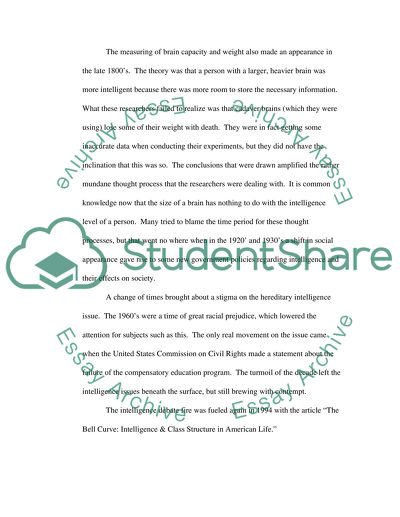 Download file to see previous pages In 1869, Francis Galton said "intelligence must be bred, not trained." This short sighted statement was taken as truth during this time period. The tone of Galton's work lent itself to the fact that he felt that people were only born intelligent and education did nothing more than foster the already embedded intelligence. This type of narrow minded conclusions about intelligence would help to bring about a regime that would have even more radical thoughts on intelligence but take it to a much more dangerous level.
The measuring of brain capacity and weight also made an appearance in the late 1800's. The theory was that a person with a larger, heavier brain was more intelligent because there was more room to store the necessary information. What these researchers failed to realize was that cadaver brains (which they were using) lose some of their weight with death. They were in fact getting some inaccurate data when conducting their experiments, but they did not have the inclination that this was so. The conclusions that were drawn amplified the rather mundane thought process that the researchers were dealing with. It is common knowledge now that the size of a brain has nothing to do with the intelligence level of a person. Many tried to blame the time period for these thought processes, but that went no where when in the 1920' and 1930's a shift in social appearance gave rise to some new government policies regarding intelligence and their effects on society.
A change of times brought about a stigma on the hereditary intelligence issue. The 1960's were a time of great racial prejudice, which lowered the attention for subjects such as this. The only real movement on the issue came when the United States Commission on Civil Rights made a statement about the failure of the compensatory education program. The turmoil of the decade left the intelligence issues beneath the surface, but still brewing with contempt.
The intelligence debate fire was fueled again in 1994 with the article "The Bell Curve: Intelligence & Class Structure in American Life."
The Bell Curve, in its introduction, begins with a brief description of the history of intelligence theory and recent developments in intelligence thought and testing, through the eyes of the authors. The introduction concludes with six important assumptions that the authors build much of the Bell Curves case upon. These six assumptions regarding the validity of "classical" cognitive testing techniques include:
1. There is such a difference as a general factor of cognitive ability on which human beings differ.
1. All standardized test of academic aptitude or achievement measure this general factor to some degree, but IQ tests expressly designed for that purpose measure it most accurately.
1. IQ scores match, to a first degree, whatever it is that people mean when they use the word intelligent, or smart in ordinary language.
1. IQ scores are stable, although not perfectly so, over much of a persons life.
1. Properly administered IQ tests are not demonstrably biased against social, economic, ethnic, or racial groups.
1. Cognitive ability is ...Download file to see next pagesRead More
Share:
Tags
Cite this document
(“Human Intelligence Book Report/Review Example | Topics and Well Written Essays - 2000 words”, n.d.)
Retrieved from https://studentshare.org/people/1517350-human-intelligence

CHECK THESE SAMPLES OF Human Intelligence

This report will aim at critically evaluating the role of human networks in knowledge creation and knowledge sharing within Patni Computer Systems Ltd. (Patni). For this purpose, an extensive literature review will be undertaken and various theories pertaining to human resource management will be made use of....

The painting...
7 Pages(1750 words)Coursework
sponsored ads
Save Your Time for More Important Things
Let us write or edit the book report/review on your topic "Human Intelligence" with a personal 20% discount.
GRAB THE BEST PAPER

Let us find you another Book Report/Review on topic Human Intelligence for FREE!