Comments (0)
Add to wishlist Delete from wishlist
Cite this document
Summary
The level of unemployment still remains high in many of the European countries despite the more efforts that have been directed by the concerned in trying to mitigate the situation. The level of unemployment has been on the increase which has raised concern from many stakeholders who have attributed the increasing rate to insufficient level of economic activity in the region and the malfunction of the labour markets…
Download full paper File format: .doc, available for editing
HIDE THIS PAPERGRAB THE BEST PAPER95.4% of users find it useful 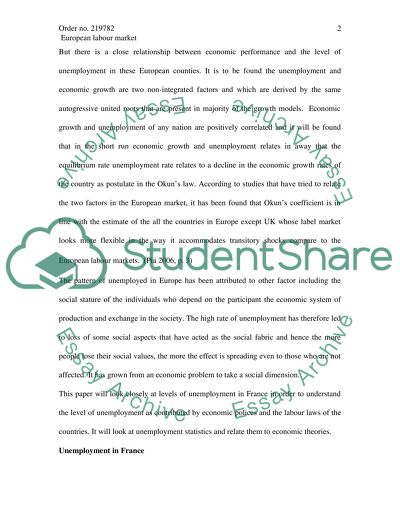 Download file to see previous pages (Theil, 2008, p. 76)
Unemployment in Europe has been shown to be worrying phenomena based on the fact that more than 20 million people are unemployed in the continent. But the most worrying fact has been that this is only affect some segment of the society and especially based on ethic factors. Fore example it has been shown the Italy is one of the European countries where the level of unemployment is affecting some segment of the population and it has been closely liked to certain social components. It has been shown most o the region in Europe with has excess labour supply with exception of France and Spain enjoys full employment while others have very high rate unemployment. (OECD 1997, p. 3)
But there is a close relationship between economic performance and the level of unemployment in these European counties. It is to be found the unemployment and economic growth are two non-integrated factors and which are derived by the same autogressive united roots that are present in majority of the growth models. Economic growth and unemployment of any nation are positively correlated and it will be found that in the short run economic growth and unemployment relates in away that the equilibrium rate unemployment rate relates to a decline in the economic growth rates of the country as postulate in the Okun's law. According to studies that have tried to relate the two factors in the European market, it has been found that Okun's coefficient is in line with the estimate of the all the countries in Europe except UK whose label market looks more flexible in the way it accommodates transitory shocks compare to the European labour markets. (Pia 2006, p. 3)
The pattern of unemployed in Europe has been attributed to other factor including the social stature of the individuals who depend on the participant the economic system of production and exchange in the society. The high rate of unemployment has therefore led to loss of some social aspects that have acted as the social fabric and hence the more people lose their social values, the more the effect is spreading even to those who are not affected. It has grown from an economic problem to take a social dimension.
This paper will look closely at levels of unemployment in France in order to understand the level of unemployment as contributed by economic polices and the labour laws of the countries. It will look at unemployment statistics and relate them to economic theories.
Unemployment in France
Franc has been one of the largest economies in the world and by 2005, it was estimated the France had a GDP of $1.862 trillion according to the World Bank report which was measure in terms of purchasing power parity. In 2008, CIA Word Factbook rated France economy to be more than $2.067 trillion which means that it was ranked at the eighth targets economy. But the economy of France is place at sixth position by both World Bank and the International Monetary Fund and much other survey have ranked France in the third position in Europe behind German and the UK but in 2006 it was ranked ahead of UK in the second position.
The economy of Fran ...Download file to see next pages Read More
Share:
Tags
Cite this document
(“European Labour Market Essay Example | Topics and Well Written Essays - 5250 words”, n.d.)
European Labour Market Essay Example | Topics and Well Written Essays - 5250 words. Retrieved from https://studentshare.org/people/1503962-european-labour-market

..., a viable market economy and the capacity of the Nation to abide by the policies of the European Union. The Commission screens the suitability of the country in the light of 35”chapters” like food safety, agriculture, energy and transport policies, foreign and security policies etc. Before the negotiations begin, the country may be asked to fulfill certain benchmarks, and the procedure varies depending on the merit of the applying country. The country must indicate a time-line for the implementation of the EU policies and processes. “When all negotiations are complete to the unanimous satisfaction of the member countries, a Draft Accession Treaty is compiled and submitted to the Council, Commission, Parliament and member countries...
9 Pages (2250 words) Case Study

... some of the recent trends have prompted the prediction that consumption of beer will go down in some of European countries like France, Spain and Germany. The threat of such a consequence has forced many companies to focus on the emerging markets like those of Asian countries where people are likely to spend a large sum of money on the consumption of beer and other alcohol. People in Sweden and UK are found to shift their inclination from to wine. Russia might emerge as the biggest market of beer since consumers there are found to accept beer more readily than vodka. It is quite evident from the graph given below that China is likely to see a sharp rise in beer consumption by the end of 2012. Poland, Romania and Ukraine are also expected...
7 Pages (1750 words) Assignment
sponsored ads
Save Your Time for More Important Things
Let us write or edit the essay on your topic "European Labour Market" with a personal 20% discount.
GRAB THE BEST PAPER

Let us find you another Essay on topic European Labour Market for FREE!