Comments (0)
Add to wishlistDelete from wishlist
Cite this document
Summary
The researcher states that rise in global migration is the outcome of moderate strategies as well as poor border controls. Nations such as the UK, support an inconsistent amount of the world's immigrants. Immigration is terrible for the developing nations as it causes to “brain drain”…
Download full paperFile format: .doc, available for editing
HIDE THIS PAPERGRAB THE BEST PAPER95.7% of users find it useful 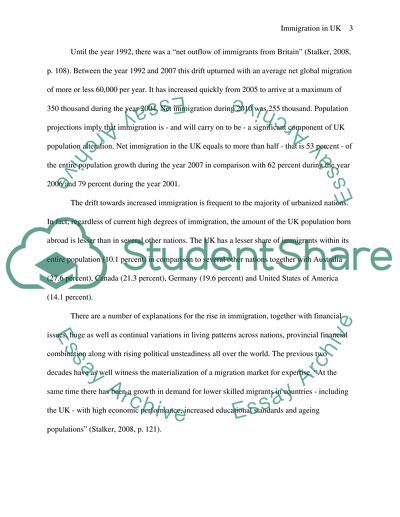 Extract of sample "Immigration in UK"

Download file to see previous pages This essay discusses that the level of immigration has risen considerably during the past 30 years: United Nation’s estimations of amount of individuals residing outside their own country go beyond 250 million. Yet the striking thing regarding these figures is not the number of individuals wanted to reside in a different country, “but how few”. Just a tiny fraction of the world's inhabitants migrates in any single year, mainly in their own countries. Global immigrants account now for merely about 3.5 percent of the world’s entire population. In addition, immigration is provisional in most cases. Until the year 1992, there was a “net outflow of immigrants from Britain”. Between the year 1992 and 2007 this drift upturned with an average net global migration of more or less 60,000 per year. It has increased quickly from 2005 to arrive at a maximum of 350 thousand during the year 2004. Net immigration during 2010 was 255 thousand. Population projections imply that immigration is - and will carry on to be - a significant component of UK population alteration. Net immigration in the UK equals to more than half - that is 53 percent - of the entire population growth during the year 2007 in comparison with 62 percent during the year 2006 and 79 percent during the year 2001. The drift towards increased immigration is frequent to the majority of urbanized nations. In fact, regardless of current high degrees of immigration, the amount of the UK population born abroad is lesser than in several other nations. The UK has a lesser share of immigrants within its entire population (10.1 percent) in comparison to several other nations together with Australia (27.6 percent), Canada (21.3 percent), Germany (19.6 percent) and United States of America (14.1 percent). There are a number of explanations for the rise in immigration, together with financial issues, huge as well as continual variations in living patterns across nations, provincial financial combination along with rising political unsteadiness all over the world. The previous two decades have as well witness the materialization of a migration market for expertise. “At the same time there has been a growth in demand for lower skilled migrants in countries - including the UK - with high economic performance, increased educational standards and ageing populations” (Stalker, 2008, p. 121). Even prior to European Union development, migration streams from Eastern Europe had risen subsequent to the descend of the Berlin Wall during the year 1989. The 1990s as well observed a considerable raise in the amount of shelter seekers. More lately, there have been major inflows of overseas learners coming to pursue education at British universities, and of immigrants moving to connect with their family units within the UK. Methods, which have been initiated to manage immigration, are mostly successful. A large number of individuals around the globe act in ...Download file to see next pagesRead More
Share:
Tags
Cite this document
(“Immigration in UK Essay Example | Topics and Well Written Essays - 4750 words”, n.d.)
Retrieved from https://studentshare.org/people/1394521-immigration-in-uk
(Immigration in UK Essay Example | Topics and Well Written Essays - 4750 Words)
https://studentshare.org/people/1394521-immigration-in-uk.
“Immigration in UK Essay Example | Topics and Well Written Essays - 4750 Words”, n.d. https://studentshare.org/people/1394521-immigration-in-uk.
Comments (0)
Click to create a comment or rate a document

CHECK THESE SAMPLES OF Immigration in UK

The term clinical governance gained importance following the high mortality rate for pediatric cardiac surgery at the Bristol Royal Infirmary. The incident led to the formation by the government in 1998 of the Kennedy Commission, which proved a turning point in overhauling the NHS (Kennedy, 2001). The commission’s final report recommended that change “can only be brought about with the willing...
11 Pages(2750 words)Term Paper
sponsored ads
Save Your Time for More Important Things
Let us write or edit the essay on your topic "Immigration in UK" with a personal 20% discount.
GRAB THE BEST PAPER

Let us find you another Essay on topic Immigration in UK for FREE!