Comments (0)
Add to wishlistDelete from wishlist
Cite this document
Summary
Home Building Industry and Debt Ceiling Debate A classic definition of the home building industry is the constructing or designing of residential homes. Currently, this industry has been depressed due to a weak economy and it has faced many challenges. Homebuyers’ wallets don’t always dictate the changes in buyers’ tastes, though the current economic situation has intimidated the development of home building and has effectively limited the variety of new homes on the market…
Download full paperFile format: .doc, available for editing
HIDE THIS PAPERGRAB THE BEST PAPER93.8% of users find it useful 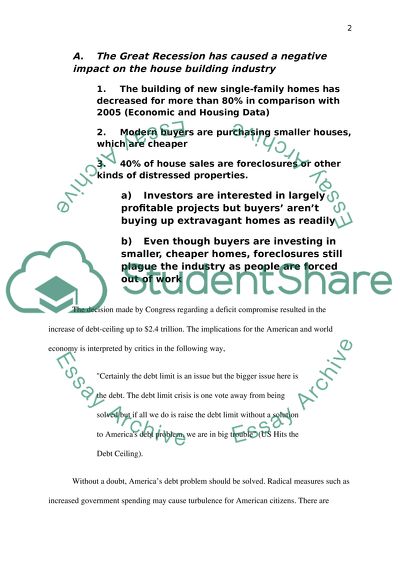 Home Building Industry and Debt Ceiling Debate A ic definition of the home building industry is the constructing or designing of residential homes. Currently, this industry has been depressed due to a weak economy and it has faced many challenges. Homebuyers’ wallets don’t always dictate the changes in buyers’ tastes, though the current economic situation has intimidated the development of home building and has effectively limited the variety of new homes on the market. Standard Industry Code (SIC Code) of the home building industry is 1520, which represents General BLDG Contractors-Residential BLDGS. The North American Industry Classification System, (NAICS) code for the house building industry is 236116 and it respectively stands for Home Builders (Except Operative), Multifamily or 236115 for Home Builders (Except Operative), Single family (Economic and Housing Data). US-based home building industries depend on fluctuations of interest rates. The structure of the home building industry has become progressively more attractive. Investors within the industry consist of two main competitive classes: multi-regional builders and smaller builders, (often inclusive of National Association of Home Builders members). Another fact that the home building industry is growing despite a stagnant economy is the increasing stock rates of building companies that are on the rise. Though the industry as a whole has been hit financially, there are incorporated building companies succeeding in the marketplace. Regardless of limited success, there are some predicaments within this industry that’ve been triggered by the recession. The new developments can be outlined as follows: A. The Great Recession has caused a negative impact on the house building industry 1. The building of new single-family homes has decreased for more than 80% in comparison with 2005 (Economic and Housing Data) 2. Modern buyers are purchasing smaller houses, which are cheaper 3. 40% of house sales are foreclosures or other kinds of distressed properties. a) Investors are interested in largely profitable projects but buyers’ aren’t buying up extravagant homes as readily b) Even though buyers are investing in smaller, cheaper homes, foreclosures still plague the industry as people are forced out of work The decision made by Congress regarding a deficit compromise resulted in the increase of debt-ceiling up to $2.4 trillion. The implications for the American and world economy is interpreted by critics in the following way,  "Certainly the debt limit is an issue but the bigger issue here is the debt. The debt limit crisis is one vote away from being solved but if all we do is raise the debt limit without a solution to America's debt problem, we are in big trouble" (US Hits the Debt Ceiling). Without a doubt, America’s debt problem should be solved. Radical measures such as increased government spending may cause turbulence for American citizens. There are particularly negative opinions concerning the rise of the debt ceiling in America between Democrats and Republicans alike. Leading pushes by key opposition to raising the debt ceiling include fears that without a firm plan to get the US out of debt using appropriated funds will only devalue the dollar further and possibly turn a “double-dip recession” into a full-blown second depression.          There are a lot of retirees in America and it is very important for the country to save Medicare and Social Security. Without these programs, a total bankruptcy of the country may occur. Therefore, any actions to cut them have been stoutly opposed by the majority of representatives in Congress. It is more beneficial for the American economy to increase economic growth through tax cuts and breaks to spur investment rather than increases in taxes affecting the middle class. Moreover, there are some House Republicans oppose the idea of the debt ceiling rise with every turn. They agree to compromise only if the Obama administration accepts big spending cuts or introduces strict restrictions for potential spending of newly generated funds. As a consequence of a debt ceiling rise, Republicans consider the possibility that the government may default on its debt payments (US Hits the Debt Ceiling). Citizens would be affected severely by this. If this comes to fruitition, the government may cut expenses on social programs and sell its assets or real estate. Any kind of urgent measures taken by the American government towards a compromise, if kept at the current rate of progress, will not be instituted by the August 2 deadline. Works cited 1. Economic and Housing Data: National Housing Trends. Available from: 2. National Association of Home Builders. Available from: http://www.nahb.org 3. U.S. Hits the Debt Ceiling: What Does It All Mean? Available from: Read More
Share:
Tags
Cite this document
(“Strategy theory and practice Essay Example | Topics and Well Written Essays - 500 words”, n.d.)
Retrieved from https://studentshare.org/other/1428868-strategy-theory-and-practice
(Strategy Theory and Practice Essay Example | Topics and Well Written Essays - 500 Words)
https://studentshare.org/other/1428868-strategy-theory-and-practice.
“Strategy Theory and Practice Essay Example | Topics and Well Written Essays - 500 Words”, n.d. https://studentshare.org/other/1428868-strategy-theory-and-practice.
Comments (0)
Click to create a comment or rate a document

CHECK THESE SAMPLES OF Strategy theory and practice

...Management Theory and Practice in the early childhood education industry This Report applies management theory into practice in the early childhood industry, especially in the context of women leaders. Management issues play a significant role in the academic sector, because early childhood professionals need higher levels of motivation in order to avoid burnout . As pointed out in a study by Osgood and Halsall (2007) where they carried out research to examine the position of women in leadership or management positions, a “glass ceiling” exists for women in the academic setting, which could significantly impair motivation. Since many of the individuals employed in the early education sector are women, addressing this issue is even more...
6 Pages(1500 words)Coursework
sponsored ads
Save Your Time for More Important Things
Let us write or edit the essay on your topic "Strategy theory and practice" with a personal 20% discount.
GRAB THE BEST PAPER

Let us find you another Essay on topic Strategy theory and practice for FREE!