Comments (0)
Add to wishlistDelete from wishlist
Cite this document
Summary
Anthony Sudarga INBA 3810 - 03 Professor Li Dai March 6, 2012 Task 1: Find a Question The company that I chose to interview is Platinum Ceramics Industry (PCI). I interviewed the CEO of the company, John Koh. This company is headquartered in Surabaya, Indonesia…
Download full paperFile format: .doc, available for editing
HIDE THIS PAPERGRAB THE BEST PAPER93.1% of users find it useful 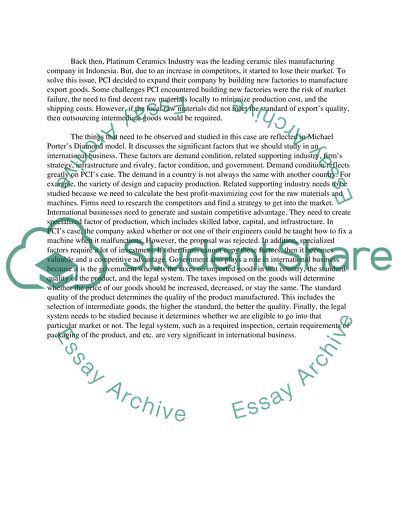 Download file to see previous pages Unlike Asia Tile, Platinum manufactures tiles both for import and export. At first, Platinum exported their products mainly to the United States and to several other countries, such as China, Malaysia, and Vietnam. But, due to a change of demand for the tiles’ motive, PCI started to decrease their export to the United States. However, the revenue gained from exporting to the United States is not as much as the revenue achieved from exporting to Malaysia, Vietnam, and China. The raw materials needed to manufacture exporting goods to the United States are relatively scarce in Asia. As such, this has caused the production cost to increase as the price of the raw materials increase due to scarcity. This case has become a challenging issue. PCI also outsources several of their intermediate goods from countries around Asia. They import their glaze materials, as well as coloring materials from a company in China called China Glaze. PCI gets better quality for these materials for a significantly better price. However, outsourcing goods from other countries have some significant disadvantages. It is time consuming, and sometimes the coloring materials do not properly match with what PCI needs. If PCI needs to produce a certain type or motive immediately, it will not be able to use the outsourced goods as they are very time consuming. John Koh stated that the process of outsourcing the intermediate goods can be a very complicated and tedious chore. There was one time where the goods (China Glaze) were rejected because it did not meet the standards of PCI’s expectations. Therefore, they had to ship it back to China for an exchange of the better quality products, though sometimes they may even have to remake the mixture of the coloring materials in order to match the original design (the percentage of which coloring materials to be used). Not only does this get complicated at times, but it can be very time consuming (it can take more than a month for the materials to be received). There is also a challenging issue when it comes to machineries. PCI bought most of their machines from Europe. Therefore, when the machine either malfunctions or breaks, it takes a few days for the technician to arrive from Europe. The machine’s company will not let one of PCI’s engineers study and fix the machines as the repairs require careful and professional attention. The consequence when a machine breaks down is a decrease in production for several days. Back then, Platinum Ceramics Industry was the leading ceramic tiles manufacturing company in Indonesia. But, due to an increase in competitors, it started to lose their market. To solve this issue, PCI decided to expand their company by building new factories to manufacture export goods. Some challenges PCI encountered building new factories were the risk of market failure, the need to find decent raw materials locally to minimize production cost, and the shipping costs. However, if the local raw materials did not meet the standard of export’s quality, then outsourcing intermediate goods would be required. The things that need to be observed and studied in this case are reflected in Michael Porter’s Diamond model. It discusses the significant factors that we should study in an international business. These factors are demand condition, related supporting industry, firm’s strategy, infrastructure and rivalry, factor condition, and government. Demand condition ...Download file to see next pagesRead More
Share:
Tags
Cite this document
(“International Business Essay Example | Topics and Well Written Essays - 1000 words”, n.d.)
Retrieved from https://studentshare.org/other/1395832-international-business
(International Business Essay Example | Topics and Well Written Essays - 1000 Words)
https://studentshare.org/other/1395832-international-business.
“International Business Essay Example | Topics and Well Written Essays - 1000 Words”, n.d. https://studentshare.org/other/1395832-international-business.
Comments (0)
Click to create a comment or rate a document

As a matter of fact, Hoffman’s statement that “international affairs is the nemesis of liberalism” has a grain of truth in it and this is especially so after the 9/11 incident.
There are two schools of thought or perspectives that are used to view international affairs: liberalism and realism. The study of these two perspectives is significant to the idea posed by Stanley Hoffman because they determine the reasons why international affairs, according to him, does not only see eye-to-eye with liberalism but seems to stand on the opposing side of it.
Liberalism can be defined as having four elements: citizens; the legislature; property rights, and; a market-driven economy (Dunne 186). Realism, on the othe...
6 Pages(1500 words)Assignment
sponsored ads
Save Your Time for More Important Things
Let us write or edit the essay on your topic "International Business" with a personal 20% discount.
GRAB THE BEST PAPER