Comments (0)
Add to wishlistDelete from wishlist
Cite this document
Summary
In the current advent of innovation and globalization, with shrinking distances and integrated economies, the world of health care is also undergoing a paradigm shift. …
Download full paperFile format: .doc, available for editing
HIDE THIS PAPERGRAB THE BEST PAPER94.6% of users find it useful 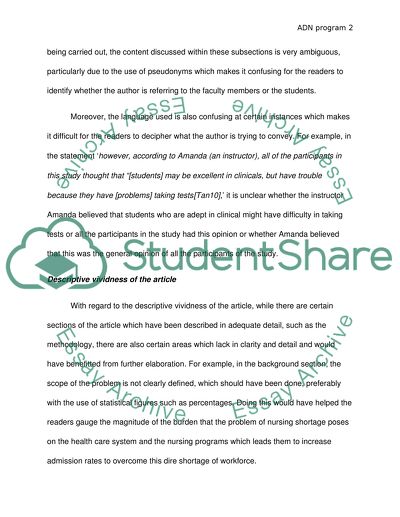 Download file to see previous pages Over the past several years, due to the growing burden of several diseases, there has been an exponential rise in the demand for health care professionals, including nurses, leading to a rapid influx of nursing students into nursing programs in order to overcome this existing nursing shortage. However, this rapid influx results in a trade-off between the quality of nursing education being provided vs. the quantity of students enrolled each year in order to increase the workforce.
Initial reactions to the study
After going through this article, my initial reaction to it was a mixed one. In my opinion, while this article addresses and underscores a very important issue, which compels the readers to read this article, the article itself does little justice to the topic that it is addressing and has several shortcomings. This is due to several reasons, the most important one being the lack of proper organization. As the readers go through this article, instead of getting a clear idea of what the author is trying to get across, they become confused. Although the author has attempted at organizing the article into different sections and subsections based on the themes identified from the research being carried out, the content discussed within these subsections is very ambiguous, particularly due to the use of pseudonyms which makes it confusing for the readers to identify whether the author is referring to the faculty members or the students.
Moreover, the language used is also confusing at certain instances which makes it difficult for the readers to decipher what the author is trying to convey. ...
98),’ it is unclear whether the instructor Amanda believed that students who are adept in clinical might have difficulty in taking tests or all the participants in the study had this opinion or whether Amanda believed that this was the general opinion of all the participants of the study. Descriptive vividness of the article With regard to the descriptive vividness of the article, while there are certain sections of the article which have been described in adequate detail, such as the methodology, there are also certain areas which lack in clarity and detail and would have benefitted from further elaboration. For example, in the background section, the scope of the problem is not clearly defined, which should have been done, preferably with the use of statistical figures such as percentages. Doing this would have helped the readers gauge the magnitude of the burden that the problem of nursing shortage poses on the health care system and the nursing programs which leads them to increase admission rates to overcome this dire shortage of workforce. Similarly, the section mentioning the results of the study is followed directly by a section on recommendations and there is no discussion section preceding recommendations. As a norm for both qualitative and quantitative studies, the results are followed by a section on the discussion of the important findings from amongst those results and their comparison with existing studies. This was not done by the author. Moreover, although the objective of this study was to elucidate the factors underlying success of students enrolled in a nursing program and to throw light on the experiences of successful students, the main ...Download file to see next pagesRead More
Share:
Tags
Cite this document
(“Prescription for success in an associate degree nursing program Article”, n.d.)
Retrieved from https://studentshare.org/nursing/1414605-prescription-for-success-in-an-associate-degree

“Prescription for Success in an Associate Degree Nursing Program Article”, n.d. https://studentshare.org/nursing/1414605-prescription-for-success-in-an-associate-degree.
Comments (0)
Click to create a comment or rate a document

Emily's immediate supervisor deems her ‘over-enthusiasm’ as an impediment to her efficiency at work. Thus, she is recommended to lessen the time she spends for every patient.
Although she understands her supervisor’s recommendation from a business operation’s point-of-view, she is still adamant in her belief that gaining customer insights is crucial in aiding the pharmacy in better developing its line-up of medicinal offers. Carrying this burden, Emily consults her mentor in The Medical Nation, Dr Hussa Al Husine.
The mentoring session with Dr Husine happens twice a week for three weeks after Emily’s daily working period. Even without having a firm background in professional coaching, Emily thin...
10 Pages(2500 words)Coursework
sponsored ads
Save Your Time for More Important Things
Let us write or edit the article on your topic "Prescription for success in an associate degree nursing program" with a personal 20% discount.
GRAB THE BEST PAPER

Let us find you another Article on topic Prescription for success in an associate degree nursing program for FREE!