Comments (0)
Add to wishlistDelete from wishlist
Cite this document
Summary
Ray and B.B. King are musicians who could make good use of music instruments to prove their talents. The writer of this assignment seeks to compare the work of B.B. King and Ray Charles. Specifically, the writer will focus on discussing the professional career of both artists…
Download full paperFile format: .doc, available for editing
HIDE THIS PAPERGRAB THE BEST PAPER91.5% of users find it useful 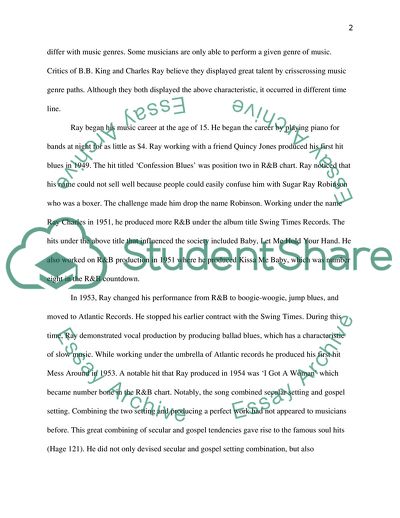 Extract of sample "Comparison Between Ray Charles and B.B King"

Let us find you another Assignment on topic Comparison Between Ray Charles and B.B King for FREE!