Comments (0)
Add to wishlistDelete from wishlist
Cite this document
Summary
The paper "Piano Concerto No 17 in G Major by Wolfgang Amadeus Mozart" states that the beauty in a piece of art is the fluttering of the butterflies it has in the emotions it brings over the mind to conduct the human factor inside the body of ideas which are inserted into the heart through feelings…
Download full paperFile format: .doc, available for editing
HIDE THIS PAPERGRAB THE BEST PAPER95.2% of users find it useful 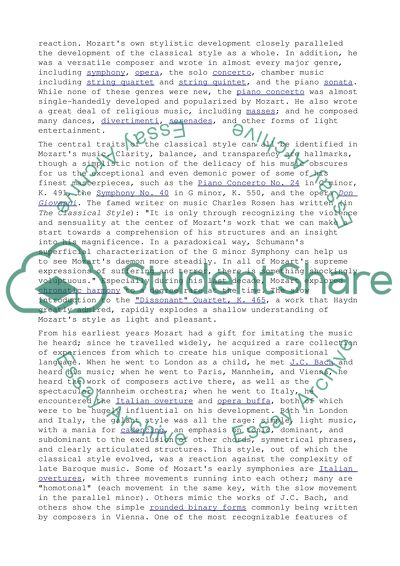 Download file to see previous pages on Ployer was joined by Mozart in a performance of the Sonata for Two Pianos, K. 448. The finale is a set of variations on what Alfred Einstein has described as a birdlike theme and there is indeed a tale that Mozart's own starling whistled the tune. In his early Vienna years, Mozart met Joseph Haydn and the two composers became friends. When Haydn visited Vienna, they sometimes played together in an impromptu string quartet. Mozart's six quartets dedicated to Haydn (K. 387, K. 421, K. 428, K. 458, K. 464, and K. 465) date from 1782-85, and are often judged to be his response to Haydn's Opus 33 set from 1781. In a letter to Haydn, Mozart wrote:
A father who had decided to send his sons out into the great world thought it his duty to entrust them to the protection and guidance of a man who was very celebrated at the time, and who happened moreover to be his best friend. In the same way, I send my six sons to you... Please then, receive them kindly and be to them a father, guide, and friend!... I entreat you, however, to be indulgent to those faults which may have escaped a father's partial eye, and in spite of them, to continue your generous friendship towards one who so highly appreciates it."[4]
Haydn was soon in awe of Mozart, and when he first heard the last three of Mozart's series he told Leopold, "Before God and as an honest man I tell you that your son is the greatest composer known to me either in person or by name: He has taste, and, furthermore, the most profound knowledge of composition." Mozart's music, like Haydn's, stands as an archetypal example of the Classical style. His works spanned the period during which that style transformed from one exemplified by the style galant to one that began to incorporate some of the contrapuntal complexities of the late Baroque, complexities against which the Galant style had been a reaction. Mozart's own stylistic development closely paralleled the development of the classical style as a whole. In addition, he was a versatile composer and wrote in almost every major genre, including symphony, opera, the solo concerto, chamber music including string quartet and string quintet, and the piano sonata. While none of these genres was new, the piano concerto was almost single-handedly developed and popularized by Mozart. He also wrote a great deal of religious music, including masses; and he composed many dances, divertimenti, serenades, and other forms of light entertainment.
The central traits of the classical style can all be identified in Mozart's music. Clarity, balance, and transparency are hallmarks, though a simplistic notion of the delicacy of his music obscures for us the exceptional and even demonic power of some of his finest masterpieces, such as the Piano Concerto No. 24 in C minor, K. 491, the Symphony No. 40 in G minor, K. 550, and the opera Don Giovanni. The famed writer on music Charles Rosen has written (in The Classical Style): "It is only through recognizing the violence and sensuality at the center of Mozart's work that we can make a start towards a comprehension of his structures and an insight into his magnificence. In a paradoxical way, Schumann's superficial characterization of the G minor Symphony can help us to see Mozart's daemon more steadily. ...Download file to see next pagesRead More
Share:
Tags
Cite this document
(Piano Concerto No. 17 Essay Example | Topics and Well Written Essays - 1750 words, n.d.)
Piano Concerto No. 17 Essay Example | Topics and Well Written Essays - 1750 words. https://studentshare.org/music/1505233-piano-concerto-no-17
(Piano Concerto No. 17 Essay Example | Topics and Well Written Essays - 1750 Words)
Piano Concerto No. 17 Essay Example | Topics and Well Written Essays - 1750 Words. https://studentshare.org/music/1505233-piano-concerto-no-17.
“Piano Concerto No. 17 Essay Example | Topics and Well Written Essays - 1750 Words”. https://studentshare.org/music/1505233-piano-concerto-no-17.
Comments (0)
Click to create a comment or rate a document

5 Pages(1250 words)Research Paper
sponsored ads
Save Your Time for More Important Things
Let us write or edit the essay on your topic "Piano Concerto No 17 in G Major by Wolfgang Amadeus Mozart" with a personal 20% discount.
GRAB THE BEST PAPER

Let us find you another Essay on topic Piano Concerto No 17 in G Major by Wolfgang Amadeus Mozart for FREE!