Comments (1)
Add to wishlistDelete from wishlist
Cite this document
Summary
Summary: This is a collection of images of the Negros who were shipped to America to work in the cotton, tobacco and sugar cane plantations in the America. They were produced and stored by the Library of Congress, Photograph Department. They show how these slaves were treated,…
Download full paperFile format: .doc, available for editing
HIDE THIS PAPERGRAB THE BEST PAPER92.7% of users find it useful 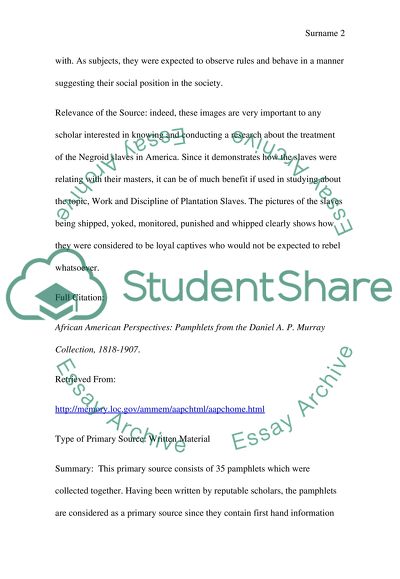 Lecturer Primary Source Analysis Full Citation: Images of African-American Slavery and Freedom From the Collections of the Library of Congress
Retrieved From:
http://www.loc.gov/rr/print/list/082_slave.html
Type of Primary Source: Visual Image
Summary: This is a collection of images of the Negros who were shipped to America to work in the cotton, tobacco and sugar cane plantations in the America. They were produced and stored by the Library of Congress, Photograph Department. They show how these slaves were treated, subjected to harsh and inhumane working conditions and given strict rules to comply with. As subjects, they were expected to observe rules and behave in a manner suggesting their social position in the society.
Relevance of the Source: indeed, these images are very important to any scholar interested in knowing and conducting a research about the treatment of the Negroid slaves in America. Since it demonstrates how the slaves were relating with their masters, it can be of much benefit if used in studying about the topic, Work and Discipline of Plantation Slaves. The pictures of the slaves being shipped, yoked, monitored, punished and whipped clearly shows how they were considered to be loyal captives who would not be expected to rebel whatsoever.
Full Citation:
African American Perspectives: Pamphlets from the Daniel A. P. Murray Collection, 1818-1907.
Retrieved From:
http://memory.loc.gov/ammem/aapchtml/aapchome.html
Type of Primary Source: Written Material
Summary: This primary source consists of 35 pamphlets which were collected together. Having been written by reputable scholars, the pamphlets are considered as a primary source since they contain first hand information about the plights of the African-Americans. These are the people who were used as slaves to work on the white plantations in the America. In these collections, the writers give a clear picture on how these slaves were subjected to harsh treatments and expected to remain disciplined. This, as they explain, was mainly achieved as a result of the punitive laws which had been put in place.
Relevance: these pamphlets are very important in understanding the expansive history of the African-Americans. It can be instrumental in studying about the discipline of the slaves who were working on the plantation farms. Hence, it comes out as an outstanding and credible primary source authored by reputable scholars including Frederick Douglass, Ida Wells-Barnett, and Booker Washington.
Full Citation: Voices from the Days of Slavery
Retrieved From: http://memory.loc.gov/cgi-bin/query/r?ammem/afcesnbib:@FIELD%28DOCID+@lit%28afcesn000160%29%29
Type of Primary Source: Interview
Summary: This is an excerpt of an interview which was conducted by about slavery. On June 11, 1949, Hermond Norwood interviewed Fountain Hughes in Baltimore, Maryland. Hughes was the right person for this interview because he was a former slave who had a deeper understanding about slavery. In this interview, he gave an account on how oppressive slavery was to the Negros. He says that they were not treated as human beings. Instead, they were stripped off their fundamental rights.
Relevance: This interview is very important in understanding much about the effects of slavery on the African-Americans and their feelings towards it. Besides, it shows how inhumane it was to subject people to forced labor and severely punish them for any (perceived) wrong doing. In this regard, it can be of much value when conducting a research about the nature of the working conditions in which the slaves were operating. After all, it is much reliable as it provides first-hand information from a real victim who witnessed slavery. Read More
Share:
Tags
Cite this document
(“Primary source Analysis Research Paper Example | Topics and Well Written Essays - 500 words”, n.d.)
Primary source Analysis Research Paper Example | Topics and Well Written Essays - 500 words. Retrieved from https://studentshare.org/miscellaneous/1653054-primary-source-analysis

tm
tmayer added comment 4 months ago
Student rated this paper as
I didn’t know how to start my document. "Primary source Analysis" helped me out a lot! Especially the list of resources was valuable.

... Who ed the "Account of the Eastern Barbarians"? Jinwung Kim wrote the account of the eastern barbarians. 2. What is the aim of the author for writing the account? Why did he choose to write about what he did? Who did he have in mind as potential readers of this text? The author writes the account to explain the characters of the barbarians. The account talks more of the cultures of the people being referred to as barbarians, the customs of the people, their cultural practices, their economic activities and other characteristics of the people in question. The story targets those people without knowledge of the barbarians, what they do and how they behave (Kim 7). 3. Based on what the author wrote, what can we infer about him... Who ed the...
2 Pages(500 words)Assignment

...PRIMARY SOURCE ANALYSIS: REPORT ON THE COMMITTEE OF MERCHANTS FOR THE RELIEF OF COLORED PEOPLE SUFFERING FROM THE LATE RIOTS IN THE OF NEW YORK Name Course Code and Name Instructor Date Primary Source Analysis Q1 The report was written by an Africa American Community living in New York City. The author is a male of the black race who belongs to the lowest socioeconomic class with an undefined citizenship status. These factors may have affect the source in that it may be based on personal feelings about his situation. Q2 The source was written on May 15, 2014. The source is written in...
2 Pages(500 words)Essay

...Primary Source Analysis Insert Insert The communist manifesto Karl Marx and Friedrich Engels 1998 Location: Website. https//www.amazon.com Karl Marx created the source because he had been commissioned to write a statement of the collective principles of the communist league, which he formed in his endeavor to bring revolution and change in German. This league comprised of working class parties which came together to address their grievances with capitalism and ways they would address the problem. The different class of people in the society is what led to the formation of the league and finally the making of the statement, which become the communist manifesto (Cowling &...
2 Pages(500 words)Essay
sponsored ads
Save Your Time for More Important Things
Let us write or edit the research paper on your topic "Primary source Analysis" with a personal 20% discount.
GRAB THE BEST PAPER

Let us find you another Research Paper on topic Primary source Analysis for FREE!