Comments (0)
Add to wishlistDelete from wishlist
Cite this document
Summary
This happens through interviewing the campers and finding out the possibility of either of them suffering from the disease before arriving at the camp. The next way of identifying the…
Download full paperFile format: .doc, available for editing
HIDE THIS PAPERGRAB THE BEST PAPER93% of users find it useful 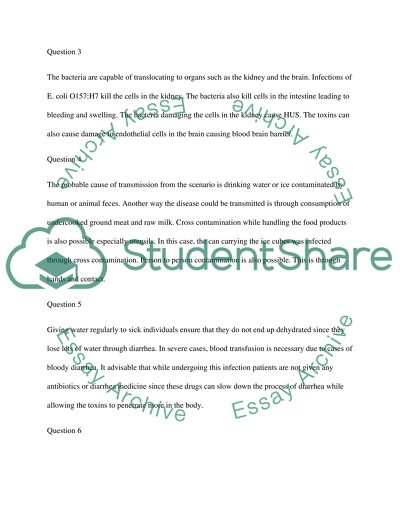 An Escherichia coli O157:H7 Outbreak among Teenage Campers Question The procedure involved in identifying the pathogen includes the history of individual campers. This happens through interviewing the campers and finding out the possibility of either of them suffering from the disease before arriving at the camp. The next way of identifying the pathogen is by checking and testing the feed in the camp and establishing their status of infection. Checking the hygienic condition of the environment to establish any source of infection is also another possible way of tracking the root of infection.
Question 2
Most of the E. coli strains are beneficial in the gut because it is gram-negative bacteria. Strains of E. coli are capable of producing vitamin K2 and K3. Gram-negative cells are protective in nature and prevent entry toxins. This factor helps in preventing entry of other microorganisms. The protective nature of gram-negative bacteria also makes them resistant to infections due to the nature of their cell membrane. Nonpathogenic strains of E. coli can also be easily studied due to their ability to survive outside the body. The bacteria also grow easily which provide a good platform for studies.
Question 3
The bacteria are capable of translocating to organs such as the kidney and the brain. Infections of E. coli O157:H7 kill the cells in the kidney. The bacteria also kill cells in the intestine leading to bleeding and swelling. The bacteria damaging the cells in the kidney cause HUS. The toxins can also cause damage to endothelial cells in the brain causing blood brain barrier.
Question 4
The probable cause of transmission from the scenario is drinking water or ice contaminated by human or animal feces. Another way the disease could be transmitted is through consumption of undercooked ground meat and raw milk. Cross contamination while handling the food products is also possible especially utensils. In this case, the can carrying the ice cubes was infected through cross contamination. Person to person contamination is also possible. This is through hands and contact.
Question 5
Giving water regularly to sick individuals ensure that they do not end up dehydrated since they lose lots of water through diarrhea. In severe cases, blood transfusion is necessary due to cases of bloody diarrhea. It advisable that while undergoing this infection patients are not given any antibiotics or diarrhea medicine since these drugs can slow down the process of diarrhea while allowing the toxins to penetrate more in the body.
Question 6
The campers are advised to deposit their waste in the right manner to avoid possibilities of outbreaks. The campers are to prepare their food in the right manner by ensuring that meat products are well cooked. In addition to this, the campers should ensure that they drink pasteurized milk an eat vegetables that have not been infected by sewage. Another way through which contamination is through drinking contaminated water. The campers are advised to drink boiled water and avoid any means of contamination (1-1969)). Person to person contamination is possible therefore, campers are advised to wash their hands properly after visiting the toilets and before handling food. Use of clean equipment’s and utensils is also necessary for the campers.

CHECK THESE SAMPLES OF An Escherichia coli O157:H7 Outbreak among Teenage Campers

...and the Eosin methylene Blue agar. They provide with grey, bright pink and metallic sheen colonies on the agars respectively. The most feasible temperature for E. coli is 37 degrees (Charles Davis). Conclusion E.Coli O157 is one of the deadliest strains of the bacteria. Different characteristics of this strain make it difficult for diagnosis and treatment. It is spread through animal carriers which are very difficult to be pinpointed as animals can catch the bacterium from many different sources. The outbreaks of this strain have reported to cause many illnesses in recent years and different treatment strategies have been formed in order to cure individuals who have consumed this...
4 Pages(1000 words)Research Paper

...are incorporated into plasmids permitting the ease of spreading the genes to new hosts. The emergence of bacterial strains with multiple antibiotic resistance was attributed to increased antibiotics use, especially those belonging to third-generation cephalosporins (Schiappa, et al., 1996). These enzymes are expressed mostly by E.coli and K. pneumoniae (Figure 3), but have been detected in other Enterobacteriaceae as well. The enzymes cleave or hydrolyze the lactam ring of lactam antibiotics effectively inactivating the antibiotic. Outbreaks due to ESBL-producing Escherichia coli and Klebsiella species have occurred in Europe (Sirot, et al., 1987) and the United States (Meyer, Urban,...
22 Pages(5500 words)Literature review

..., resisting the basic ciprofloxacin. These strains are referred to as extended spectrum beta-lactamase E.coli. There is therefore need to develop new antibiotics and explore new ways of tackling the bacteria. Introduction Escherichia coli, commonly referred to as E. coli, are amongst the few organisms that have steered the art of antibiotic resistance in bacteria to altogether new levers. The European E. coli outbreak of 2011 served as an eye opener on the magnitude of harm such a development can cause. On that regard, it is vital to understand the antibiotic resistance mechanism of E. coli, especially at the molecular level. This implies...
6 Pages(1500 words)Essay

Experiment on the bacterium Escherichia coli

... and spinach. Escherichia coli O157:H7 is a leading cause of food-borne illness in various parts of the world. E. coli O157:H7 was first recognized as a cause of illness in 1982 during an outbreak of severe bloody diarrhea; the outbreak was traced to contaminated hamburgers. Since then, more infections in the United States have been caused by eating undercooked ground beef than by any other food. It is a fact based on a 1999 estimate that about 73,000 cases of infection and 61 deaths occur every year in the United States alone. Unhygienic practices are the main cause for infection with E.coli O157:H7. The common way in which this bacterial infection affects human beings is bloody diarrhea, and sometimes may also be responsible... that...
8 Pages(2000 words)Essay

...Measles Outbreaks The Measles outbreak of is perhaps one of the largest, after recent record highs in Then the cases went down, 54 in 2012 and 189 in 2013. Reports show that measles cases are on the rise in other countries, too, especially in Turkey, Philippines, Vietnam and Germany. So far, there are about 160 confirmed cases in the United States in 2014. This figure is expected to continue rising due to unconfirmed cases. Recent measles exposures include 59 cases in Ohio, 38 in Knox County, 6 in Holmes, 1 in Wayne and 1 in Richland. This is a record high, beating the recorded 58 cases in 2013, in New York City (Turncock, 2012). The US has sufficient health structures in place and measles vaccine are usually given to people, so... Outbreaks ...
1 Pages(250 words)Essay

...Measles Outbreak Insert Insert s Introduction Recently, U.S has faced an increase in the rate of measles infection inthe community. The prevalence of measles has risen from the average figures of 220 cases per annum in 644 cases in 2014. The rise in measles is because of various local and national health problems. It highlights a growing problem in California and country. This article would examine measles, its main source, and the issues that cause it and develop a campaign to address its issue. What began as an outbreak of measles among seven people, who in December visited Disneyland, has drastically spread to over 26 women. The unvaccinated women from California transmitted the virus...
4 Pages(1000 words)Essay

...﻿ ESCHERICHIA COLI Introduction: Escherichia coli is a bacterium which is referred to as an enterobacteriacea that is a bacteria that exists normally in the intestine of human and animals. This bacterium which exists in the form of gram negative rods has been named after the man, Theodor Escherich who discovered them in the year 1885. This bacterium is not completely aerobic that is it can survive in the presence of oxygen and it also has the capability to exist in the absence of oxygen by the process of fermentation. E. coli also has the property of movement though there are certain forms of the bacteria that form exceptions and do not move. The mobility is provided... ...
6 Pages(1500 words)Research Paper
sponsored ads
Save Your Time for More Important Things
Let us write or edit the essay on your topic "An Escherichia coli O157:H7 Outbreak among Teenage Campers" with a personal 20% discount.
GRAB THE BEST PAPER

Let us find you another Essay on topic An Escherichia coli O157:H7 Outbreak among Teenage Campers for FREE!