Comments (0)
Add to wishlistDelete from wishlist
Cite this document
Summary
In the past, it was an important form of cutlery art, and usually contained water for washing hands over a basin (Barnet et al. 2006). Customary hand washing during meals was…
Download full paperFile format: .doc, available for editing
HIDE THIS PAPERGRAB THE BEST PAPER92.8% of users find it useful 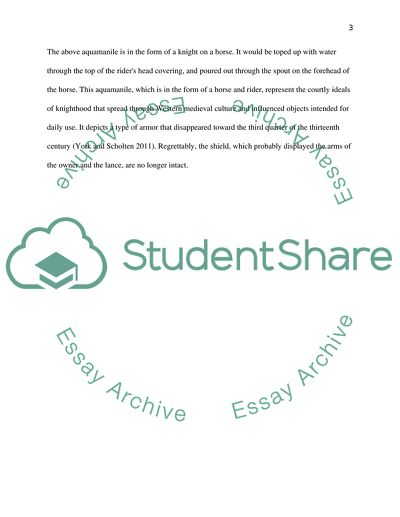 ART HISTORY-AQUAMANILE ART Introduction An aquamanile is a pot or jug-type vessel that takes up the form of one or more animal orhuman contour. In the past, it was an important form of cutlery art, and usually contained water for washing hands over a basin (Barnet et al. 2006). Customary hand washing during meals was essential because the most of the people in the middle ages used only their hands for eating and it was quite messy. This method of cleaning hands was characteristic of both upper-class meals and the Christian Holy Communion. Historically the term was occasionally used for any figure of basin or pottery so used, regardless of shape. Those made in the shape of an animal are among the most distinctive products of medieval artisans (Wixom and Phillipe 2005). The most commonly seen zoomorphic aquamaniles are lions, but dragons, griffins, and many other forms were also produced. Most surviving examples are in metal, normally copper alloys as pottery versions have rarely survived (Barnet et al. 2006).
1.
The above aquamanile is in the form of a knight on a horse. It would be toped up with water through the top of the riders head covering, and poured out through the spout on the forehead of the horse. This aquamanile, which is in the form of a horse and rider, represent the courtly ideals of knighthood that spread through Western medieval culture and influenced objects intended for daily use. It depicts a type of armor that disappeared toward the third quarter of the thirteenth century (York and Scholten 2011). Regrettably, the shield, which probably displayed the arms of the owner and the lance, are no longer intact.
2.
The theme of this celebrated example is the upright legend of Aristotle and Phyllis, which achieved remarkable popularity in the later part of the middle ages (York and Scholten 2011). The vulgar nature suggests that this aquamanile was designed for a domestic setting, where it would have served either as a water container or also as an object of entertainment for guests at the table.
The Greek philosopher Aristotle, who was also the teacher of Alexander the Great, allowed disgrace to himself through the sly Phyllis as an example to the inexperienced ruler, who had yielded in on her deceit and deserted the affairs of state. Giving a chance Alexander to view his idiocy, Aristotle made it clear that if an old man as himself could be so gullible, then the probable cost for a young man was more dangerous (Barnet et al. 2006).

A carefully structured, naturalistic sculpture in the round, this ewer, like a slightly earlier dragon aquamanile in the collection, was sculptured using the lost wax process. Surface details were then expertly impressed in the cold metal. The vessel was filled through a covered opening hidden between the rows of tail feathers, and water was poured out through the cock’s open beak. Although the bird is not without religious implication; most notably in the story of Saint Peters denial of Jesus, it seems highly possible that this aquamanile served a secular purpose. The cock was a trendy character in such twelfth-century literature as the story of Renart the Fox and is perhaps famous today from Chanticleer, the rooster in Chaucers fourteenth century "The Nuns Priests Tale."
4.

The crowned centaur is probably Chiron, the king of the centaurs, brandishing a sword in his right hand, appears about to kill the dragon attacking his left side. This outstanding work of art represents an incredible beast; the dragon whose head and neck, seized in the soldier’s left hand, form the spout (Barnet et al. 2006) additionally supplements the form here. Provenance of this particular aquamanile finds attribution to Böhler Kunsthandlung, Munich and was sold in 1910.
5.
This remarkable vessel symbolizes a dragon, which is held up by its front limbs and on the tips of its wings behind, with a tail that tresses up into a handle. It was filled through an opening in the tail, now missing its hinged cover. Water flowed out through the formed by the hooded figure held between the dragons teeth. In addition to its visual power, this aquamanile is distinguished by fine artisanship, visible in the carefully sculpt dragons scales and other surface details.
Bibliography
 Barnet, Peter, and Pete Dandridge. Lions, dragons, & other beasts: aquamanilia of the Middle Ages, vessels for church and table. New Haven: Yale University Press, 2006.
Wixom, William D., and Philippe Montebello. Medieval sculpture at the Metropolitan: 800 to 1400. New York: Metropolitan Museum of Art, 2005.
York, N.Y., and Frits Scholten. European sculpture and metalwork. New York: Metropolitan Museum of Art ;, 2011. Read More
Share:
Tags
Cite this document
(“Paper Subject: Art History- (Pick a title of exhibition) Research”, n.d.)
Retrieved from https://studentshare.org/miscellaneous/1617568-paper-subject-art-history-pick-a-title-of-exhibition

CHECK THESE SAMPLES OF Paper Subject: Art History- (Pick a title of exhibition)

... ways: their dress, the form of their shoes. And so beauty has a share in everything that they make. As for us, in our corsets, our tight shoes, our ridiculous pinching clothes, we are pitiful. The graces exact vengeance for our science (Eugene Delacroix). The Women of Algiers in their Apartment is without doubt one of the greatest works ever done on imperialism and it goes down in history as so. Work Cited Said, Edward W. Orientalism. New Delhi: Penguin Books, 1995. Print.... The women of Algiers in their Apartment Due Many countries participated in colonization in the day and time when it was the trend. The countries of the West believed that a lot of power lay in acquiring a colony and exploiting all its resources exhaustively. This was...
4 Pages(1000 words)Research Paper

...of such complementary work is Claude Monet’s ‘The Bodmer Oak, Fontainebleau Forest’ and Eugène Cuvelier’s ‘Beech Tree near the Bodmer Oak’ which both depicts similar scenery at Fontainebleau. ‘In the Forest of Fontainebleau: Painters and Photographers from Corot to Monet entertainingly educate viewers of the significance of Fontainebleau for the painters and photographers during the 19th century. From the exhibit, I was familiarized with the indispensable relationship between painting and photography and their necessity in recounting the history of important events and places. Furthermore, the exhibit visually narrates the progress in the art of Impressionists by...
2 Pages(500 words)Essay

...of legislature. As such, any law requires the consent of both houses so as to ensure that there is widespread support and consensus for any given legal change. There is a degree of removal between the citizen and the law. The government according to the newly ratified Constitution was directly accountable to the people in three main ways. First the members of the House of Representatives were elected to office through a direct and popular vote every two years. Senators were appointed to office by State legislatures for 6 year terms (this changed with the 17th amendment). Thus they were beholden to State governments, themselves elected by the people. Thirdly the President was to be elected to a 4 year term by a popular vote, albeit...
2 Pages(500 words)Essay

...they have a different choice of opinions being offered from many sources in terms of the meaning of art. These opinions conflict with each other leading to even more confusion. This paper aims at expounding the relationship between society and art, based on two magazines photos, the photo of Marilyn Monroe and sculpture from MOMA bringing out the three works of Art and interpretation of photographs, from which the particular basis of art stems in. The photographs are from a magazine, and entails of two models, which in this case are titled Superstars and Superbitch. A well dressed gentleman and a lady both with grey suits. They look...
6 Pages(1500 words)Essay

...are readymade, referring to the map, and unexpected. Michael Criton located Johns “between Duchamp and Pollack, between the found object and the created abstraction” (Lanchner and Johns, 2009, p. 19). The second work of art is a collection of prints by Johns in which the numbers 0-9 have been created through the methodology of lithography. Lithography is a process where a smooth surface is treated in some areas so that it will retain ink, but leaving others so that the ink will not be retained. The surface is then used as a printing object from which to press an image onto another surface, most often a paper. The works were created between 1960 and 1963 and are simply titled “0-9”. The...
4 Pages(1000 words)Essay

.... Holbein got informed on the perspective of a single point in art. The applied the antique motifs as well as the architectural forms. The painting made by Holbein on the dynastic Tudor at the white wall showed that he had prepared towards a large mural. The painting included 25 pieces; each piece was cut and painted on the background (Wolf et al. 50). Conclusion A painting should get all inclusive should show the inner importance of the subject. The sense should be in accordance to the painter’s point of view. It should include more than the literal likeness of the subject. In accordance to Aristotle, a portrait should present both the inward and outward significance of the...
2 Pages(500 words)Essay

... s Paintings are one of the most expressive forms of art, yet there is divergence on the since all painters tend to develop their own style which painting similar kind of subjects. For instance while painting human subjects, a few painters focus on the expressions of the sitters, while others focus more on the surroundings. Every painting is a reflection of the painter`s intellect, underlying philosophy and also how they tend to demonstrate their work to the audience. In this context, two painting may be of special interest, since these tend to be quite distinct from other works by popular artists. These two paintings i.e. Picasso`s ‘Woman with a Mandolin’ and Modigliani’s ‘Portrait of artist`s Wife’ there is an inherent theme... which...
4 Pages(1000 words)Essay

...Art Exhibition Art Exhibition Introduction The renaissance and proto-renaissance period introduced a diverse culture in the Westernand Eastern European communities. The culture determined the use of different theories and philosophies other than theology. It is evident that the Italian community shifted its interests to the secularism philosophies in the 15th century. Such a culture was incremental to the artistic movement as it influenced the birth of the “speaking statues”. Further, the Florentine culture of art evolved and the sculptors developed honorable artifacts in acknowledgement of distinct social icons at the age. The most renowned statues from...
4 Pages(1000 words)Essay

...﻿ Art Exhibition Introduction This exhibition looks at art form from three dimensions like art work using materials from daily life, art work using traditional material and high tech art works. In the first part, the art works of Tom Friedman, Janine Antoni and Caroline Saul is looked in to. In the second part, the art works of Jeff Koons, Ai Wei Wei and Dan Webb are concentrated upon. Finally the artwork of Stelarc, Odani and Yayoi Kusama are looked in it. These three groups are distinct because they give an insight into the fact that art is in every matter and it merely take the creativity of an artist to bring these into art form. Working with each group in reality gives opportunity for the artist to put in virtual environment... is an...
5 Pages(1250 words)Essay
sponsored ads
Save Your Time for More Important Things
Let us write or edit the research paper on your topic "Paper Subject: Art History- (Pick a title of exhibition)" with a personal 20% discount.
GRAB THE BEST PAPER

Let us find you another Research Paper on topic Paper Subject: Art History- (Pick a title of exhibition) for FREE!