Comments (0)
Add to wishlistDelete from wishlist
Cite this document
Summary
Scholars the world over often glance through the intellectual heritage of human progress for ideas while registering their appreciation of knowledge passed on to them. Indeed as it is, scholarship is all about an agitated quest for a much deeper understanding of what exists but…
Download full paperFile format: .doc, available for editing
HIDE THIS PAPERGRAB THE BEST PAPER93.2% of users find it useful 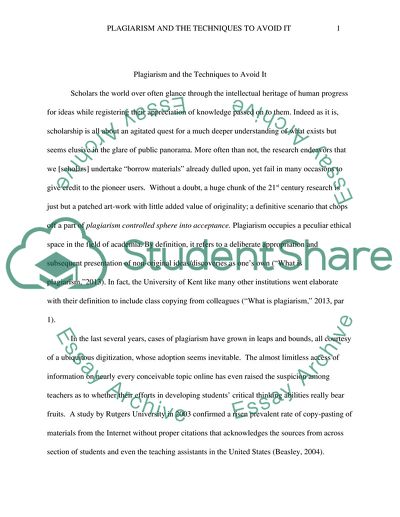 Plagiarism and the Techniques to Avoid It Details: al Affiliation: Plagiarism and the Techniques to Avoid It
Scholars the world over often glance through the intellectual heritage of human progress for ideas while registering their appreciation of knowledge passed on to them. Indeed as it is, scholarship is all about an agitated quest for a much deeper understanding of what exists but seems elusive in the glare of public panorama. More often than not, the research endeavors that we [scholars] undertake “borrow materials” already dulled upon, yet fail in many occasions to give credit to the pioneer users. Without a doubt, a huge chunk of the 21st century research is just but a patched art-work with little added value of originality; a definitive scenario that chops off a part of plagiarism controlled sphere into acceptance. Plagiarism occupies a peculiar ethical space in the field of academia. By definition, it refers to a deliberate appropriation and subsequent presentation of non-original ideas/discoveries as one’s own (“What is plagiarism,”2013). In fact, the University of Kent like many other institutions went elaborate with their definition to include class copying from colleagues (“What is plagiarism,” 2013, par 1).
In the last several years, cases of plagiarism have grown in leaps and bounds, all courtesy of a ubiquitous digitization, whose adoption seems inevitable. The almost limitless access of information on nearly every conceivable topic online has even raised the suspicion among teachers as to whether their efforts in developing students’ critical thinking abilities really bear fruits. A study by Rutgers University in 2003 confirmed a risen prevalent rate of copy-pasting of materials from the Internet without proper citations that acknowledges the sources from across section of students and even the teaching assistants in the United States (Beasley, 2004).
Historically, the primary forum to combating plagiarism has been the educational institutions through their honor code programs. In almost all learning institutions, with few exceptions, plagiarism is an unacceptable offence strictly prohibited with heavy penalties. Such institutions have embraced a number of good academic practices, which includes paraphrasing and ethical copying (Gardner, 1999). Though written in own word, information gleaned from other sources should not only have the authors, but show a thorough understanding through point-explanations in addition to own comments. Such a show of knowledge and understanding goes beyond mere display of another person work through memorization and subsequent repetition. One can also avoid plagiarism by following certain rules of copying. Direct copying of whole paragraphs must rarely appear in own writing. In case such is unavoidable, one must use block quotes from a named author. For very short sentences used, the words copied must be marked clearly as quotations and acknowledged.
As a Human Service Provider, it would be prudent to avoid direct copying altogether. It not only shows lack of originality but also gives an impression of limited understanding. Paraphrasing with some explanations is comparatively preferable as it offers rare opportunities of expounding on a topic of discussion to an audience who may not be privy to an author’s language.
It is disturbing to note that in spite of the many of campaigns against plagiarism, the prevalence rate of the vice is much higher today than any other time in history, more so among teaching assistants who are considered guides on avoidance of the same. It is almost right to claim that lecturers plagiarize more than their students by incorporating students’ submitted assignments into their research works without feeling any guilt. It would be a good idea to institutionalize a system to verify the same in institutions of higher learning.
References
Gardner, D. (1999). Plagiarism and How to Avoid It. Retrieved from
http://www4.caes.hku.hk/plagiarism/image/all_in_one.pdf
“What is plagiarism?” (2013). University of Kent. Retrieved from
http://www.kent.ac.uk/ai/students/whatisplagiarism.html
Beasley, J. (2004). The Impact of Technology on Plagiarism Prevention and Detection: Research
Process Automation, a New Approach for Prevention. Atlanta, Georgia: Uniting Networks Incorporated. Read More
Share:
Tags
Cite this document
(“Plagiarism Research Paper Example | Topics and Well Written Essays - 500 words”, n.d.)
Retrieved from https://studentshare.org/miscellaneous/1617557-plagiarism

...?[Your full full July 23, Plagiarism Plagiarism refers to the act of copying or using the ideasof others without referring to the original source. For example, if a person writes a report or an essay and copies some relevant statements from other sources, such as, internet articles, encyclopedias, books, magazines, government documents, and publications, without mentioning the sources of those statements both within the essay and in the page of references, it means that the person has done plagiarism in his/her paper. Plagiarism is considered an academic crime in academic settings. There is no school, college, or university anywhere in the world that does not discourage...
3 Pages(750 words)Essay

...?Plagiarism occurs when a purports an idea that belongs to another as his original idea failing to acknowledge the source of information. Plagiarism is intellectual dishonest or theft since one implies to own ideas that are not his own, and consequently commits a form of dishonesty. Plagiarism can take many forms such as direct copy pasting of other students work or sources, and has bad repercussions to students and writers; however, there are strategies to avoid plagiarism that include paraphrasing, use of quotes and employing specific referencing styles such as MLA. Plagiarism usually applies to specific texts that are print published, texts that are...
4 Pages(1000 words)Essay

...WRITING MENT The purpose of submitting this written ment is to clarify and explain myself to my teacher and the misconduct officer for the prima facie case of suspected plagiarism regarding my work on individual report on “Samsung Strategic Plan.” In the following passages I have given the accounts in order to justify myself how this was not intentionally done. I know that plagiarism is a violation of the code of conduct and is a malpractice. I have a clear understanding that I am prohibited to take another writer’s work and ideas and claim them as my own. I acknowledge the fact that I have copied word-for-word but most of the text was not paraphrased or copied at all. In no way did I mean any...
2 Pages(500 words)Essay

... Plagiarism and Strategy for Prevention The advancement of technology has ensured that a whole lot of textual material is now available onlinewithin a few clicks of the mouse. This easy access has tremendous advantages because students and researchers across the globe can take advantage of referring to materials, which were earlier available only in certain libraries. On the other side, this has also made plagiarism easier than ever before (Underwood and Szabo, 2003). The Council of Writing Program’s Administrators (WPA) mentions that plagiarism happens when a writer deliberately uses someone else’s language, ideas, or other original (not common-knowledge) material without acknowledg­ing its source (Council of Writing Program... ...
5 Pages(1250 words)Essay

...Plagiarism Every individual is capable of formulating and establishing his or her own opinions or ideas. However, due to the excessive access to information, many are using this privilege to copy the works of others without giving full credit to the sources. This practice has been well-known as plagiarism. This can be universally defined as the act of copying or imitating the works, words, ideas, thought, or feelings conveyed by an author in a particular text without acknowledging the original text and the author. In many cases, the doers of plagiarism are students who do their assignments haphazardly, who do not trust their own knowledge and ability on the given task, and others who aim...
2 Pages(500 words)Essay

...Recommendation for Ingrid’s penalty in committing plagiarism There is no doubt that plagiarism goes against school policy of upholding academic integrity. The accused, Ingrid, admitted to the plagiarism charges lodged against her by her instructor. In her defense, she cited that such commission of plagiarism was unintentional because she was extremely busy that she neglected to document her source as carefully as should have. The punishment for plagiarism under the school’s policy for a senior is withholding the bachelor’s degree for one year and a permanent notation on the student’s transcript that he or she committed plagiarism.  ...
2 Pages(500 words)Essay

...Plagiarism in the criminal justice field How could this be problematic in your major field of study? Plagiarism is very real in the professional work place (Ferree & Pfeifer, 2013). In the past few years, there have been highly publicized cases of professionals losing their jobs because of passing off other people’s work as their own. In the criminal justice field, plagiarism is not only unethical but also illegal and may lead to criminal charges (Ferree & Pfeifer, 2013). Explain the difficulties of someone presenting another individual’s hard work as their own if this occurred on the job or where you intend to work after obtaining this degree It is very difficult for someone to present...
1 Pages(250 words)Assignment

..._______________________________ Print out and study the four examples below. Each example first presents the original work, followed by text that a student wrote and handed in for an essay assignment. Decide if the student’s work constitutes plagiarism or not. If the student’s work is plagiarism, identify it as one of the 5 types described on the handout, “Plagiarism: What It Is and How to Avoid It”. Note, however, that the student’s work may be acceptable. EXAMPLE 1: Original Writing from Two Sources Source 1: "Despite the strong public opposition, the Reagan administration continued to install so many North American men, supplies, and facilities in Honduras that one expert called it...
2 Pages(500 words)Essay
sponsored ads
Save Your Time for More Important Things
Let us write or edit the research paper on your topic "Plagiarism" with a personal 20% discount.
GRAB THE BEST PAPER

Let us find you another Research Paper on topic Plagiarism for FREE!