Comments (0)
Add to wishlistDelete from wishlist
Cite this document
Summary
Dubai, Sharjah, Ajman, Ras al Khaimah, Umm ul Quwain, Fujairah and Abu Dhabi as the capital are the seven emirates of this federation. In the article ‘Social Media Fashion in the…
Download full paperFile format: .doc, available for editing
HIDE THIS PAPERGRAB THE BEST PAPER94.4% of users find it useful 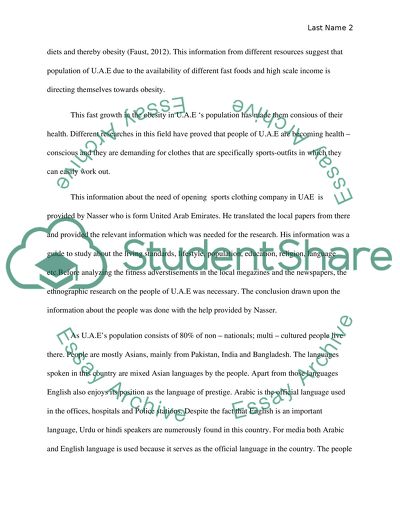 Extract of sample "See the dise"

See the Dice U.A.E is the federation of seven emirates, the federation is called as United Arab Emirates. Dubai, Sharjah,Ajman, Ras al Khaimah, Umm ul Quwain, Fujairah and Abu Dhabi as the capital are the seven emirates of this federation. In the article ‘Social Media Fashion in the Digitally Fluent Young Arabic Women in the U.A.E’, it is reported that seven emirates constitute U.A.E, which were independent until 1971. With the exception of education and some other services which are governed by federal government, each emirate has its own ruler family (Strong & Hareb, 2012)
There is a dire need of opening a sports clothing company in U.A.E. in order to authenticate the need, and this process demands a deeper analysis and study about the country.
Its economy is strong and prosperous. This country is regarded as one of the finest place for the tourism. It holds almost 80% non- nationals as stated by Boleat (2012). One of the cities of U.A.E, Dubai is known as ‘city of Gold’. Boleat(2012) also reports about the economy of this country by saying “Dubai has a highly developed economy”.
With increasing living standards and lifestyle people have become conscious about their lifestyles and looks. The rapid economic growth of the country has also contributed to improved diets and thereby obesity (Faust, 2012). This information from different resources suggest that population of U.A.E due to the availability of different fast foods and high scale income is directing themselves towards obesity.
This fast growth in the obesity in U.A.E ‘s population has made them consious of their health. Different researches in this field have proved that people of U.A.E are becoming health – conscious and they are demanding for clothes that are specifically sports-outfits in which they can easily work out.
This information about the need of opening sports clothing company in UAE is provided by Nasser who is form United Arab Emirates. He translated the local papers from there and provided the relevant information which was needed for the research. His information was a guide to study about the living standards, lifestyle, population, education, religion, language etc.Before analyzing the fitness adverstisements in the local megazines and the newspapers, the ethnographic research on the people of U.A.E was necessary. The conclusion drawn upon the information about the people was done with the help provided by Nasser.
As U.A.E’s population consists of 80% of non – nationals; multi – cultured people live there. People are mostly Asians, mainly from Pakistan, India and Bangladesh. The languages spoken in this country are mixed Asian languages by the people. Apart from those languages English also enjoys its position as the language of prestige. Arabic is the official language used in the offices, hospitals and Police stations. Despite the fact that English is an important language, Urdu or hindi speakers are numerously found in this country. For media both Arabic and English language is used because it serves as the official language in the country. The people are highly educated with high literacy rate. Mixed religions are found with the majority of Muslims. The country is a Muslim country so high importance is given to Islam and its rituals.
According to the UAE government, the literacy rate for women is 91% and 84 % for men, which suggests that residents of this country are highly educated.Large number of Muslims are found with Hinduismin the next lead. Few churches have also been built for the christians. Apart from Muslims and Hindus , Christians stands in the third lead. The country of mixed religions also promote mixed cultures, thus making this country as a multi cultured country that respects evryones traditions and cultures.
For opening asports clothing company in UAE, it is necessary to analyze the needs of the mix- cultured people in the country. Analyzing the lifestyles of the people will help to select the kind of clothing needed by the people. The people are into social media, sports, lifestyle, socialization, travelling and religious rituals. They engage themselves into multi – tasks and recreation activities. Clubs as the social organizations are common in the country for example sports club etc.
Though the economy is developing and living standards of people increasing, the locals of U.A.E are interested in producing large family structures. They live in a joint family system suggesting large family structures of the people in the country.
Through the study of different advertisements and newspapers of U.A.E. a conclusion was made that the citizens of U.A.E are becoming health conscious because of the increasing rate in the obesity of people. The study made authenticated the demand of opening of sports clothing company.
Bibliography
Boleat,Mark. “Cost of living and Quality of life in International Financial Centers”. London: City of London corporartion., 2012
Faust, Andrew.”Dubais Rapid Transformation Spurs Change in Eating Habits”.Retrieved from: http://pulitzercenter.org/reporting/united-arab-emirates-dubai-cultural-health-lifestyle-transformation-citizens, 15 August 2012, retrieved on 24th february, 2013.
Strong, Catherine, and Hessah Hareb. "Social Media Fashion among Digitally Fluent Young Arabic Women in the UAE.". Vol 8, Issue 1. Read More
Share:
Tags
Cite this document
(“See the dise Essay Example | Topics and Well Written Essays - 500 words”, n.d.)
See the dise Essay Example | Topics and Well Written Essays - 500 words. Retrieved from https://studentshare.org/miscellaneous/1615997-see-the-dise

CHECK THESE SAMPLES OF See the dise

...Drugs and the Australian Criminal Justice System Narcotic consumption is rampant in Australia. There is widespread use of illicit narcotics in Australian society, despite the fact that the Australian government had prohibited the production of substances like methamphetamine and MDMA or Ecstasy by unauthorized laboratories in the nation. There had been a phenomenal increase in the number of narcotics producing units, over a period of time. Furthermore, these laboratories acquired sophisticated technology and equipment to produce these narcotic drugs. However, the drugs produced by these clandestine laboratories are used only within the nation and are not exported. For instance, it has never been established that illicit drugs... and the...
10 Pages(2500 words)Essay

...To see and not see Question Do you believe Amy did the right thing in pushing for surgery? (Remember: the surgery was brand new at the time she learned of it and no one anticipated the potential problems that patients would have once they recovered their sight.) The eye surgery that Virgil underwent being a new concept, and one which had not been practiced by a neurologist presented unforeseen challenges even before it was conducted. However, by Amy pushing for the surgery to be performed on Virgil despite the danger, I believe that she did a good thing (Sacks, 2012). Notably, by fronting for this surgery, the odds against the same appear to have been outweighed by the benefits to be derived from doing...
2 Pages(500 words)Essay
sponsored ads
Save Your Time for More Important Things
Let us write or edit the essay on your topic "See the dise" with a personal 20% discount.
GRAB THE BEST PAPER

Let us find you another Essay on topic See the dise for FREE!