Comments (0)
Add to wishlistDelete from wishlist
Cite this document
Summary
The gallery exhibition was conducted so as to praise the art work of African Americans.
I went to the National Gallery of Art on 21st January, 2013 with a group of…
Download full paperFile format: .doc, available for editing
HIDE THIS PAPERGRAB THE BEST PAPER98.7% of users find it useful 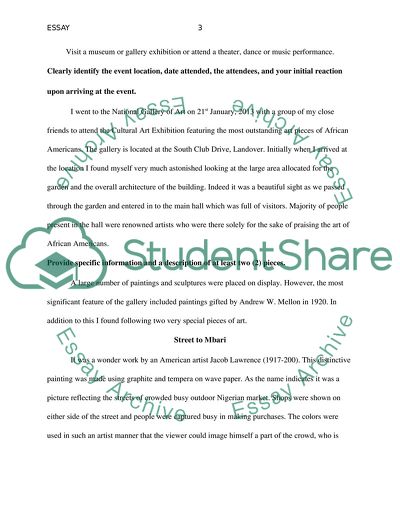 Cultural Event Report This paper aims to give details about the Cultural Art Exhibition which I attended at the NationalGallery of Art. The gallery exhibition was conducted so as to praise the art work of African Americans.

Visit a museum or gallery exhibition or attend a theater, dance or music performance.
Clearly identify the event location, date attended, the attendees, and your initial reaction upon arriving at the event.
I went to the National Gallery of Art on 21st January, 2013 with a group of my close friends to attend the Cultural Art Exhibition featuring the most outstanding art pieces of African Americans. The gallery is located at the South Club Drive, Landover. Initially when I arrived at the location I found myself very much astonished looking at the large area allocated for the garden and the overall architecture of the building. Indeed it was a beautiful sight as we passed through the garden and entered in to the main hall which was full of visitors. Majority of people present in the hall were renowned artists who were there solely for the sake of praising the art of African Americans.
Provide specific information and a description of at least two (2) pieces.
A large number of paintings and sculptures were placed on display. However, the most significant feature of the gallery included paintings gifted by Andrew W. Mellon in 1920. In addition to this I found following two very special pieces of art.
Street to Mbari
It was a wonder work by an American artist Jacob Lawrence (1917-200). This distinctive painting was made using graphite and tempera on wave paper. As the name indicates it was a picture reflecting the streets of crowded busy outdoor Nigerian market. Shops were shown on either side of the street and people were captured busy in making purchases. The colors were used in such an artist manner that the viewer could image himself a part of the crowd, who is able to hear different sounds, buy and sell goods, etc. Additionally a dissonance of primary colors finely tuned the overall sense of upheaval.
Sir Charles, Alias Willie Harris
This was yet another unique painting of its type featuring a tripled image such that the viewer could see one man from three different dimensions as a single captured subject. The Painting was made using oil on canvas and this distinctive piece of art was the creation of Barkley Leonnard Hendricks. The picture clearly reflected the culture and fashion of 1970’s in the era of civil rights. Very few colors were used in the painting and therefore it was giving a complete natural look.
Provide a summary of the event and describe your overall reaction after attending the event.
We reached there at around 12 pm on a bright sunny day. It was chilly winter and the sunshine was feeling like a blessing. The distance was about 50 kilometers from my residence and we covered it in around 20 minutes. The National Gallery of Art is built upon a very large area with a huge garden of approximately 6 acres. There is a complete white color building whose surroundings are covered with plants and trees. It was constructed somewhere in 1930’s as a result of joint resolution presented by Congress in order to serve the aesthetics of American people. I really enjoyed visiting the National Gallery of Art. I have attended several art exhibitions at different places featuring different art works, however, this visit turned out to be an extraordinary and highly fascinating. After visiting the entire main hall we again moved towards the garden which was full of natural beauty. We stayed there for around 4 hours and shared a lot of striking memories. The paintings placed on display actually touched my heart and aesthetic sense. Read More
Share:
Tags
Cite this document
(“Cultural event report Essay Example | Topics and Well Written Essays - 500 words - 1”, n.d.)
Retrieved from https://studentshare.org/miscellaneous/1615840-cultural-event-report

...? Cultural Event Report Cultural Event Report Within the context of cultural events, museums and exhibitions play an important role in helping the viewers to have deeper knowledge and understanding on cultural heritage. Besides, museums, especially permanent collections/exhibitions, help the artists to have a suitable medium to express their artistic creativity. So, I am aware of the fact that understanding of art and architecture is most helpful to be in touch with the world culture. I decided to attend The Metropolitan Museum of Art because an important...
3 Pages(750 words)Essay

...? Cultural event report A visit to the math museum In every aspect of life, people always have different opinions over different things, inthis context there are a group of people who believes in the identification of themselves as math’s people while others do not identify themselves. A math person believes that this distinction is a mare fallacy. Glen Whitney was a famous mathematician who studied mathematics on a series of education institutes on a sequence (Falk & Dierking, 1992). He studied his doctorate in the University of Harvard and later this made him open the door for a math museum, across the Madison square park. The museum occupies more than one floor in the building with...
3 Pages(750 words)Research Paper

...Cultural Event Report Institute: The event was Arts Guild at Neumann in Delaware County. It took place in August 16th to 21st this year. It was an event meant to enrich the culture of the Delaware Community. It is an event that occurs annually and it encompasses cultural arts forum, symphony, ballet classique, jazz band, art gallery, and musicals. The event was started in 1991 by the University fraternity and has been taking place faithfully since then. The performers are university community and other invited guests who travel from all over to come and participate in the event. People who attended were the university students, workers, staff, Delaware community, and visitors from all over the country. On arrival at the event... that he...
2 Pages(500 words)Admission/Application Essay

...Visit to San Francisco Museum Introduction A museum refers to an that provides security to a collection of artifacts and other objects. The artifacts and objects serve scientific, cultural, artistic or historical importance. A museum is a public institution where members of the public go viewing the exhibits of these artifacts. On 3rd March, 2012 I visited the San Francisco museum of modern arts for my very first time. The museum is located in San Francisco, California. At this museum there are a number of collections of both modern and contemporary art that are recognized internationally (Littlejohn, 2010). These works include a lot of paintings, photography, media arts, sculpture and design. The collections and works in...
2 Pages(500 words)Essay

...cultures. Being given an assignment to write a report on any type of cultural event, I have chosen to go with a musical performance. The Madison Square Garden Concert given by the famous Latin singer, Marc Anthony on February 14th, 2009, was one of his best performances ever. This might have been the best Valentine’s Day for couples as on that special day they could watch such a great romantic, perform live on stage, so many passionate love songs. The arena was packed with more than 20,000 people and it was obvious that the tickets were all sold out. I was overwhelmed after seeing so many people all in one place, but it was no surprise knowing of such a strong fan base...
2 Pages(500 words)Essay

...Cultural Event Report Details on the Event The exhibition attended was one that the National Museum of American History (NMAH) hosted and facilitated. This means that the exhibition took place in Washington DC, since NMAH is located therein. This exhibition is still in progress, having been scheduled to start from March 1st, 2012 to July 13th, 2012. The exhibition itself featured pieces titled, The Star-Sequined Banner: the Flag Which Inspired the US National Anthem and New Acquisition: The BMI Archives Confederate Music Collection. The attendees of the exhibition are me and my friends who are my classmates as well. My initial-most reaction while in the museum was...
2 Pages(500 words)Essay

...Cultural Event Report Cultural Event Report This paper will discuss a recent art event that took place in theMiami Art Museum. It will identify the museum’s location, dates of the event and guests in attendance. It will give the writers initial reaction of the event upon arriving at the museum. It will provide information and description of at least two exhibits and summarize the event as well as describe the writers overall reaction after attending the event. The Miami Art Museum refers to an art museum located in the cool suburbs of downtown Miami in the state of Florida, United States (MAM, 2012). The museum was established in 1984 and was referred to as the Center of Fine Arts, but later on in 1996 its status was raised... and was...
2 Pages(500 words)Essay

... Concert review Neil Young visited Peterson Event with an aim of having fun with Crazy Horse, the band that he loved so much. He only performed some of his songs that had to be presented only by the use of his guitar. They then released the new album, “Psychedelic Pill”. Neil performed ten songs over two hours with his renowned guitar he indeed spent quality time with the fans (www.post-gazette.com).This visit was one of a kind. Neil and the Crazy Horse guitarist known as Frank Sampero, Bassist Billy and his recognized drummer Ralph Molina performed the National Anthem before performing 13 enjoyable songs with slow tempo, the likes of “Love and Only Love.”This reminded us of his other songs like ‘Powder Finger’ whose performance... Concert...
2 Pages(500 words)Essay

...Cultural Event Report Clearly identify the event location, attended, the attendees, and your initial reaction upon arriving at the event. Its morning 22nd February 2013 it’s a drive past the Pepsi centre heading south on chopper cir towards 11th street ,taking the first left and turned left onto Auraria pkwy onto the Market street turning right onto the 14th street . My journey leads me to 13th street. It’s the shen yun 2013 festivals taking place the Buell theatre. Buell Theater is on the left of the Denver center for performing arts. Its world class facility, the reception was one of a kind. Its 8:00 and we are all seated; it’s a full packed house....
2 Pages(500 words)Essay
sponsored ads
Save Your Time for More Important Things
Let us write or edit the essay on your topic "Cultural event report" with a personal 20% discount.
GRAB THE BEST PAPER

Let us find you another Essay on topic Cultural event report for FREE!