Comments (0)
Add to wishlistDelete from wishlist
Cite this document
Summary
Aside from satisfying a person’s social needs by empowering one to interact with the world in seconds, the Internet has also made changes in how schools provide education. Learners have been able to exchange ideas without the limitation of geographical space. However, this new…
Download full paperFile format: .doc, available for editing
HIDE THIS PAPERGRAB THE BEST PAPER93.3% of users find it useful 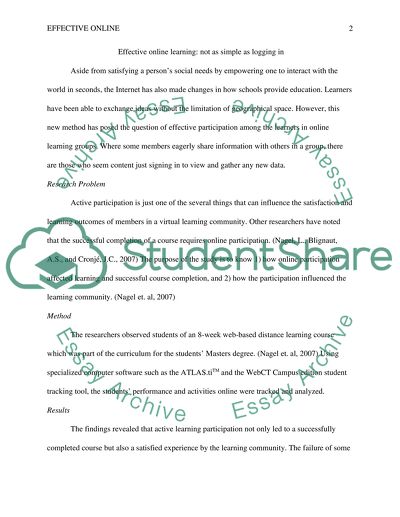 Effective online learning: Not as simple as logging in (Your first and Grand Canyon February 17, Effective online learning: not as simple as logging in
Aside from satisfying a person’s social needs by empowering one to interact with the world in seconds, the Internet has also made changes in how schools provide education. Learners have been able to exchange ideas without the limitation of geographical space. However, this new method has posed the question of effective participation among the learners in online learning groups. Where some members eagerly share information with others in a group, there are those who seem content just signing in to view and gather any new data.
Research Problem
Active participation is just one of the several things that can influence the satisfaction and learning outcomes of members in a virtual learning community. Other researchers have noted that the successful completion of a course requires online participation. (Nagel, L., Blignaut, A.S., and Cronjé, J.C., 2007) The purpose of the study is to know 1) how online participation affected learning and successful course completion, and 2) how the participation influenced the learning community. (Nagel et. al, 2007)
Method
The researchers observed students of an 8-week web-based distance learning course which was part of the curriculum for the students’ Masters degree. (Nagel et. al, 2007) Using specialized computer software such as the ATLAS.tiTM and the WebCT Campus edition student tracking tool, the students’ performance and activities online were tracked and analyzed.
Results
The findings revealed that active learning participation not only led to a successfully completed course but also a satisfied experience by the learning community. The failure of some students to get a good grade was attributed to, among others, connection problems. Responses showed that accessibility to the online course material was difficult for several learners because of unreliable Internet service, computer issues and financial constraints. Curiously, results also showed that some students had poor Internet connection but relayed this to their facilitator through text messages or phone calls. Thus, they were able to work out deadlines to successfully complete the course.
Few postings and comments on discussion boards directly affected student performance as well. The results revealed that those students who just signed in without collaborating with the community members or those who did not put up a significant number of posts or replies ended up with unsatisfactory grades or dropped the course.
Conclusion
Low online visibility and participation which encompass a number of students’ roles (Nagel et. al, 2007) resulted to unsatisfactory completion of the course. Meanwhile, there was a directly proportional relationship between participative students and exemplary grades. The researchers recommended that facilitators impart pertinent requirements to students in order to discourage read-only participants and encourage a more active and mutually beneficial experience in the online learning community. The authors noted that an increased number of non-participative students may hinder the creation of an online community and risk the students’ learning experience.
References
Nagel, L., Blignaut, A.S. & Cronjé, J.C. (2009). Read-only participants: a case for student communication in online classes. Interactive Learning Environment 17 (1), 31-51. New York, NY: Routledge. Read More
Share:
Tags
Cite this document
(“Assignment Example | Topics and Well Written Essays - 500 words - 71”, n.d.)
Retrieved from https://studentshare.org/miscellaneous/1614642-assignment