Comments (0)
Add to wishlistDelete from wishlist
Cite this document
Summary
When God commanded him to leave his country, he did so, leaving behind his family and friends. This was in spite of the fact that Abraham at that time was seventy five years of age and no young man. However, his faith was…
Download full paperFile format: .doc, available for editing
HIDE THIS PAPERGRAB THE BEST PAPER95.3% of users find it useful 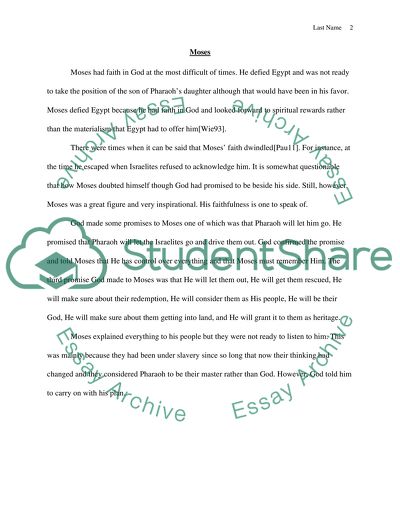 Abraham Abraham had strong faith in God in each and every matter. When God commanded him to leave his country, he did so, leaving behind his family and friends. This was in spite of the fact that Abraham at that time was seventy five years of age and no young man. However, his faith was so great that he trusted God and His command; he moved and he did not forget to worship the Lord (Sor, Hubbard and Bush 49).
God had promised Abraham to make him the father of a great nation. However, Abraham became old and his wife was infertile and he was worried about his heir (Selman 75). But God surely kept His promise and showed to Abraham that his ancestors would be as numerous as the stars in the sky. In fact, God made a binding promise through a blood covenant. And indeed, that is what happened, thus God fulfilled His promise to Abraham. Abraham had a son, Isaac who then had a son, Jacob and their bloodline led to Jesus Christ.
The second promise that God made to Abraham was of a spiritual nature. He promised to bless all nations in his Seed (Wiersbe, The Wiersbe Bible Commentary: Old Testament: The Complete Old Testament in One Volume 83).
Through these promises it is clear that Israel was to be blessed and become an important country of the world. The Old Testament very often refers to Israel while the rest of the countries are referred to just when they have any involvement with Israel.
Moses
Moses had faith in God at the most difficult of times. He defied Egypt and was not ready to take the position of the son of Pharaoh’s daughter although that would have been in his favor. Moses defied Egypt because he had faith in God and looked forward to spiritual rewards rather than the materialism that Egypt had to offer him (Wiersbe, Be Strong 46).
There were times when it can be said that Moses’ faith dwindled (Copan 44). For instance, at the time he escaped when Israelites refused to acknowledge him. It is somewhat questionable that how Moses doubted himself though God had promised to be beside his side. Still, however, Moses was a great figure and very inspirational. His faithfulness is one to speak of.
God made some promises to Moses one of which was that Pharaoh will let him go. He promised that Pharaoh will let the Israelites go and drive them out. God confirmed the promise and told Moses that He has control over everything and that Moses must remember Him. The third promise God made to Moses was that He will let them out, He will get them rescued, He will make sure about their redemption, He will consider them as His people, He will be their God, He will make sure about them getting into land, and He will grant it to them as heritage.
Moses explained everything to his people but they were not ready to listen to him. This was mainly because they had been under slavery since so long that now their thinking had changed and they considered Pharaoh to be their master rather than God. However, God told him to carry on with his plan.
Works Cited
Cockerill, Gareth Lee. The Epistle to the Hebrews. Wm. B. Eerdmans Publishing, 2012.
Copan, Paul. Is God a Moral Monster?: Making Sense of the Old Testament God. Baker Books, 2011.
Selman, Buddy. Because God Made a Promise to Abraham: But Who Is the True God? AuthorHouse, 2011.
Sor, William Sanford La, et al. Old Testament Survey: The Message, Form, and Background of the Old Testament. 2nd. Wm. B. Eerdmans Publishing, 1996.
Wiersbe, Warren W. Be Strong. David C Cook, 1993.
—. The Wiersbe Bible Commentary: Old Testament: The Complete Old Testament in One Volume. 2nd. David C Cook, 2007. Read More
Share:
Tags
Cite this document
(“Theology essay Example | Topics and Well Written Essays - 500 words”, n.d.)
Theology essay Example | Topics and Well Written Essays - 500 words. Retrieved from https://studentshare.org/miscellaneous/1614627-theology-essay

CHECK THESE SAMPLES OF Theology essay

... Instruction: Religion: A Core Necessity. I believe that, as Mahatma Gandhi said, “My religion is a matter between my God and me.” As a Business student, and as a person to whom religion is a very personal subject, the necessity of including religious courses in the Core Curriculum initially did not make sense to me. But, as I ponder over the lectures and student presentations I have attended in this course, I begin to view this issue from a different perspective. It is my opinion that it is necessary to include religious courses in the Core Curriculum as religion permeates every aspect of life, religious studies make a liberal education complete, and an understanding of different religions will remove many sources of conflict... Instruction: ...
2 Pages(500 words)Essay

The Necklace: An Thematic Analysis

...are such that they dictate submission to the will of God, on the one hand, and an acknowledgement of life as a gift, on the other.6 The implication here is that the responsibilities of life dictate that, even in the direst of circumstances, acceptance of God's will is mandatory; the care for the life He gives is an unquestioned duty; and the preservation of life is an incontrovertible responsibility. Proceeding from the above stated, abortion is simply not an option. It is, as a matter of fact, an arbitrary taking of life which, as far as Bonhoeffer was concerns, comprises an ultimate sin. It is the random taking away of life and, Christian theology maintains that all life is worth living and that no human has the...
4 Pages(1000 words)Essay

Childrens Rights in the UK

The Concepts of Rahner and Kung in Roman Catholic Theology

...Roman Catholic Theology Essay Roman Catholic Theology Essay The theories of Rahner and Kung continuously try to keep the ideologies of the traditional catholic practises in the modern society. They do so by denouncing majority of the modernised theories that are being put forward by several theologists. Many of the modern theologists propagate the school of thought that insists that the process of salvation was a duty and it belonged to the Catholics themselves. The theories above provide sufficient evidence that shows that salvation and what it entails belongs to the church. Modern Catholics are watering down on the role of Mary in the redemption of mankind. This is by...
1 Pages(250 words)Essay

Comparison/contrast of John to the Synoptic Gospels

...Religion and Theology, Essay Topic: Comparison/contrast of John to the Synoptic Gospels Scriptures contain divine revelations. The problems occur, the differences of opinion surface to the fore, when saints and scholars try to interpret them with the level of their perception. For example, the view of the mountaineer standing at a height of 1000 ft. is bound to be different from the one who is at the height of 8000 ft. John’s is an interesting book, and some inner transformation is possible with the one who reads it. Its contents are impactful. It is written for a mass audience, where the divinity of Jesus in the garb of human being, is presented. It contains records of the seven miracles. Jesus...
2 Pages(500 words)Essay

As in many pieces of literature, an entourage of minor characters accompanies Candide and assists and/or hampers his journey

... Religion and Theology, Essay Topic: As in many pieces of literature, an entourage of minor characters accompanies Candide and assists and/or hampers his journey Love between individuals of unequal status mostly leads to problems. Since Ages, this issue has resulted in serious consequences. Candide is an unfortunate victim who had to counter such a challenge. Destiny plays its part and Cunegonde and the Candide fall in love, much to the annoyance of the Baron. Many unfortunate developments take place; Cunegonde is abducted by a sergeant in the invading Bulgarian army but their love remains intact. They draw great strength... Religion...
2 Pages(500 words)Essay

Effects of Video Games on Children

4 Pages(1000 words)Essay
sponsored ads
Save Your Time for More Important Things
Let us write or edit the essay on your topic "Theology essay" with a personal 20% discount.
GRAB THE BEST PAPER

Let us find you another Essay on topic Theology essay for FREE!