Comments (0)
Add to wishlistDelete from wishlist
Cite this document
Summary
The law of evidence in the criminal and civil cases generally limits the witnesses’ testimony to the concrete facts’ statements within their own knowledge, recollection, and observation. Normally, testimonies state the facts as they are perceived by the witnesses. These…
Download full paperFile format: .doc, available for editing
HIDE THIS PAPERGRAB THE BEST PAPER98% of users find it useful 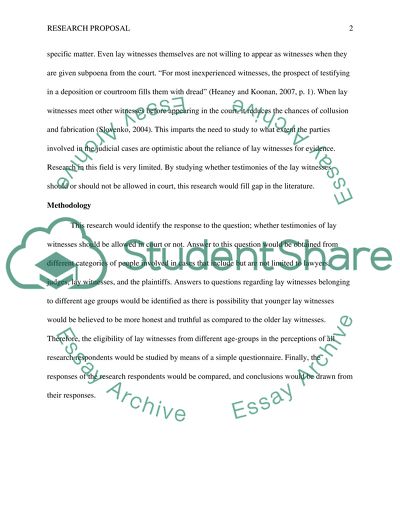 Research Proposal Research topic Should testimonies of lay witnesses be allowed in court? Introduction The law of evidence in the criminal and civil cases generally limits the witnesses’ testimony to the concrete facts’ statements within their own knowledge, recollection, and observation. Normally, testimonies state the facts as they are perceived by the witnesses. These perceptions are based on the senses of the witnesses are can be distinguished from their personal conclusions, inferences, opinions, and impressions as retrieved from the facts. Facts-based opinion testimony is deemed inadmissible and incompetent when the fact-finders and witnesses are equally qualified to use the facts to make conclusions (Hill and Hill, 2005).
Significance of the research
The law in some cases permits the witnesses to give their opinion evidence that can be categorized into expert opinion and lay opinion. “While the courts have made concessions in certain recurring situations, necessity as a standard for permitting opinions and conclusions has proved too elusive and too unadaptable to particular situations for purposes of satisfactory judicial administration” (Legal Information Institute, 2011). Lay witnesses give their opinions when they are based rationally on their perceptions, prove helpful in determining facts in the issue, and when they are not based on technical, scientific, and other kinds of knowledge in the expert testimony scope. Lay witnesses are permitted to give their opinion to help determine the weight, height, dimensions, quantity and such other features of things despite the lack of precision of their testimony. By definition, lay witnesses cannot be considered as experts on a specific matter. Even lay witnesses themselves are not willing to appear as witnesses when they are given subpoena from the court. “For most inexperienced witnesses, the prospect of testifying in a deposition or courtroom fills them with dread” (Heaney and Koonan, 2007, p. 1). When lay witnesses meet other witnesses before appearing in the court, it reduces the chances of collusion and fabrication (Slovenko, 2004). This imparts the need to study to what extent the parties involved in the judicial cases are optimistic about the reliance of lay witnesses for evidence. Research in this field is very limited. By studying whether testimonies of the lay witnesses should or should not be allowed in court, this research would fill gap in the literature.
Methodology
This research would identify the response to the question; whether testimonies of lay witnesses should be allowed in court or not. Answer to this question would be obtained from different categories of people involved in cases that include but are not limited to lawyers, judges, lay witnesses, and the plaintiffs. Answers to questions regarding lay witnesses belonging to different age groups would be identified as there is possibility that younger lay witnesses would be believed to be more honest and truthful as compared to the older lay witnesses. Therefore, the eligibility of lay witnesses from different age-groups in the perceptions of all research respondents would be studied by means of a simple questionnaire. Finally, the responses of the research respondents would be compared, and conclusions would be drawn from their responses.
References:
Heaney, L., and Koonan, K. J. (2007, Nov.). Preparing the lay witness. Plaintiff Magazine.
Retrieved from http://www.plaintiffmagazine.com/Nov07%20articles/Heaney%20Koonan_Preparing%20the%20lay%20witness_Plaintiff%20magazine.pdf.
Hill, G. N., and Hill, K. T. (2005). Expert Testimony. Retrieved from http://legal-
dictionary.thefreedictionary.com/Expert+Testimony.
Legal Information Institute. (2011). RULE 701. OPINION TESTIMONY BY LAY
WITNESSES. Retrieved from http://www.law.cornell.edu/rules/fre/rule_701.
Slovenko, R. (2004). Sequestration of Lay Witnesses and Experts. J Am Acad Psychiatry Law.
32, 447–450. Read More
Share:
Tags
Cite this document
(“Topic Proposal on Should Testimonies of Lay Witnesses be Allowed in Coursework”, n.d.)
Topic Proposal on Should Testimonies of Lay Witnesses be Allowed in Coursework. Retrieved from https://studentshare.org/miscellaneous/1613991-topic-proposal-on-should-testimonies-of-lay-witnesses-be-allowed-in-court

“Topic Proposal on Should Testimonies of Lay Witnesses Be Allowed in Coursework”, n.d. https://studentshare.org/miscellaneous/1613991-topic-proposal-on-should-testimonies-of-lay-witnesses-be-allowed-in-court.
Comments (0)
Click to create a comment or rate a document

...Christ’s death. This marks the only occasion where the Jehovah Witness receives the Holy Communion. The group does not believe in blood transfusions. It also thinks that any food containing blood or any blood products should not be partaken of. In maintaining or improving their health, believers of the denomination do not indulge in earthly pleasures, for example, drunkenness or smoking. Drinking in moderation is permitted. The members of this group are not against the idea of seeking professional advice when faced with a medical complication. This is as long as there is no involvement of blood in the procedure. They adhere to a strict diet to ensure that their immune systems are not affected or infected...
3 Pages(750 words)Research Paper

...ISAAC MUTINDA ORDER NO: 128305 TESTIMONIES OF CONVERSION Islam has continued to expand because of its ability to entice as well as attract new adherents. Converts to Islam are found across all genders, ages, all professions and social status. At least we have converts in all the above categories and it is right to say that conversion to Islam is not segregational nor is it a reserve for a few deserving individuals. Converts are derived from various ethnic and religious backgrounds. In terms of religion orientation, converts to Islam come from all backgrounds, such as Roman Catholicism, main stream protestant churches, Buddhism, Sikhs and even Judaism. Islam is both appealing and easily adaptable hence it becomes a very...
8 Pages(2000 words)Essay

...Essay Assignment #2: Topic Proposal I would like to write about the following issue (describe, explain): I would like to write about the question of legal abortion. It is seemingly a never-ending debate within the public and remains a strong issue on which people will decide their vote regardless of other attributes or positions of the candidate. The question is whether it should be legal or not and I would like to take the position that it should remain legal. My personal belief or opinion on the matter is: While I don’t feel abortion is the right option for anyone I know because my personal understanding of the practice is that it’s murder, I think it remains the...
4 Pages(1000 words)Essay

...that is paying him or her. In Australia, professional Codes of Ethics require expert witnesses to disclose fully any fee arrangement. Failure to adhere to this questions the expert witness’ objectivity and independence.  This is because some people arrange to delay paying the expert witness until after the court hands down its decision. Juries believe that an expert’s primary duty is to the court hence a witness is more credible if he or she presents opinions that counter his or her best interests. Apart from the fact that an expert witness should be unabashed about receiving payment for his or her time,...
12 Pages(3000 words)Assignment

...Research Proposal Topic Research Interest: Visual Learning and Response Visual Learning is a technique of teaching and learning where the use of images has emphasis in the impartation of ideas, concepts and information. This is done through the representation of ideas and information using symbols, and by creating graphic organizers like webs and diagrams. Research Problem: How does visual learning improve students’ performance? Research Hypothesis Visual Learning motivates students by increasing their interest in certain subjects that they would initially not pay attention to. It aids increased participation of students in classroom activities because of its interactive nature. This has a positive...
1 Pages(250 words)Research Proposal

...life took a positive course “At the outbreak of the Second World War southern Ireland declared itself neutral while the six counties of Northern Ireland as part of the United Kingdom became involved”5. Conclusion Understanding one’s family heritage is of great value as it allows one to grow emotionally and personally as an individual. “The family is usually considered the most important mechanism in value socialization” 2.Travelling reverse into my family history made me realize my foundation as a person and the contribution my family has made to my mother land America. I am proud to acknowledge that Second World War being a significant historical event of my Grandparents life as this was a war which changed the face of...
2 Pages(500 words)Research Proposal

Let us find you another Coursework on topic Topic Proposal on Should Testimonies of Lay Witnesses be Allowed in Court for FREE!