Comments (0)
Add to wishlistDelete from wishlist
Cite this document
Summary
A plate with five pegs and a camera are used in capturing the silhouette image of the hand. Once the image is captured, up to “31,000 points are analyzed and 90…
Download full paperFile format: .doc, available for editing
HIDE THIS PAPERGRAB THE BEST PAPER94% of users find it useful 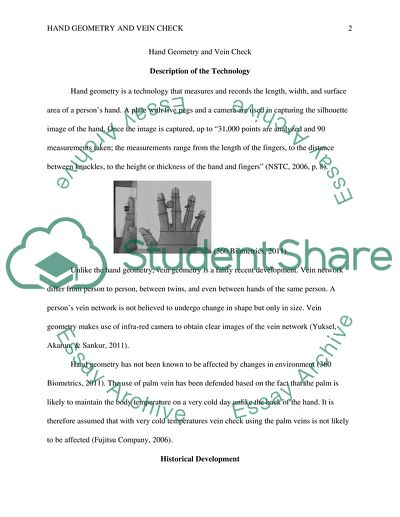 Hand Geometry and Vein Check Hand Geometry and Vein Check of the Technology Hand geometry is a technology that measures and records the length, width, and surface area of a person’s hand. A plate with five pegs and a camera are used in capturing the silhouette image of the hand. Once the image is captured, up to “31,000 points are analyzed and 90 measurements taken; the measurements range from the length of the fingers, to the distance between knuckles, to the height or thickness of the hand and fingers” (NSTC, 2006, p. 8).
(360 Biometrics, 2011)
Unlike the hand geometry, vein geometry is a fairly recent development. Vein network differ from person to person, between twins, and even between hands of the same person. A person’s vein network is not believed to undergo change in shape but only in size. Vein geometry makes use of infra-red camera to obtain clear images of the vein network (Yuksel, Akarun, & Sankur, 2011).
Hand geometry has not been known to be affected by changes in environment (360 Biometrics, 2011). The use of palm vein has been defended based on the fact that the palm is likely to maintain the body temperature on a very cold day unlike the back of the hand. It is therefore assumed that with very cold temperatures vein check using the palm veins is not likely to be affected (Fujitsu Company, 2006).
Historical Development
Hand geometry was developed in 1985 by David Sidlauskas. Since then, its popularity has grown wildly. Hand geometry is widely used by many companies (NSTC, 2006). On the other hand, vein geometry is equally increasingly attracting a lot of attention. Various parts of the hand, and indeed the body, can be used for vein pattern geometry. Badawi (2006) suggested the use of the back of the palm to obtain vein network. Fujitsu Corporation prefers using the palm. The corporation has successfully, since 2004, developed palm vein authentication for commercial banks. It latest product PalmSecure has hit the market (Fujitsu Company, 2006).
Political and Legal Influences
Hand geometry biometric has found a wide acceptance as it is viewed to be non-invasive. It has a good political good will as it enhances security especially where public places are involved. Generally, the biometric systems have the back up of the political field as they enhance security measures in public places and also greatly reduce the probability of fraud being committed. The question on whether the information collected by biometric systems can be kept private and only for the purpose for which it is collected or not raises some legal concerns (Rosenzweig, Kochems, & Schwartz, 2004).
Economical, Psychological and Sociological Considerations
The hand and vein biometric systems have great implications economically, psychologically and socially. According to NSTC (2006), hand geometry has a very low storage needs compared to other biometric systems. The hand geometry, however, raises some psychological and sociological question. Since the palm has to be placed on a screen, questions of hygiene surge to the fore in the use of this system. People are prone to feel some discomfort touching where others have touched. For the case of vein check biometric, Fujitsu has designed a contactless palm vein biometric system. A palm is placed just on top of a screen without touching it (Fujitsu Company, 2006).
Cultural, Moral and Ethical Implications
Biometrics systems have faced some socio-cultural concerns categorized into three namely: information privacy, physical privacy and religious objections. It is feared that with the use of biometric systems, information privacy is more prone to be abused due to creep and tracking abilities of these systems. These systems are also likely to be opposed due to perceived damage they may cause to body parts, for instance, the eyes. On the religious front, the systems have been associated with bringing to reality the prophesied mark of the beast in the book of Revelation (Army Biometric, n.d.).
References
360 Biometrics. (2011). FAQ – Hand Geometry. 360 Biometrics. Retrieved from http://360biometrics.com/faq/Hand-Geometry-Biometrics.php#1
Army Biometric. (n.d). What Concerns do Biometrics raise and how do they differ from concerns about identification methods. Biometric Identification Technology Ethics - BITE. Retrieved from http://www.biteproject.org/documents/rand_report_biometric.pdf
Badawi, A. M. (2006). Hand Vein Biometric Verification Prototype: A Testing Performance and Patterns Similarity. University of Tennessee. Retrieved from http://ww1.ucmss.com/books/LFS/CSREA2006/IPC4585.pdf
Fujitsu Company. (2006). Palm Vein Pattern Authentication Technology. Fujitsu Company. Retrieved from http://www.fujitsu.com/downloads/COMP/ffna/palm-vein/palmsecure_wp.pdf
NSTC. (2006). Hand Geometry. National Science and Technology Council. Retrieved from http://www.biometrics.gov/documents/handgeometry.pdf
Rosenzweig, P., Kochems, A., & Schwartz, A. (2004). Biometric Technologies: Security, legal, and Policy Implications. The Heritage Foundation. Retrieved from http://www.heritage.org/research/reports/2004/06/biometric-technologies-security-legal-and-policy-implications
Yuksel, A., Akarun, L., & Sankur, B. (2011). Hand Vein Biometry Based on Geometry and Appearance Methods. BUSIM Signal and Image Processing Lab. Retrieved from http://www.busim.ee.boun.edu.tr/~sankur/SankurFolder/Hand_vein_rev2_1July2011.pdf Read More
Share:
Tags
Cite this document
(“BIOMETRICS: Hand Geometry and Vein Check Research Paper”, n.d.)
Retrieved from https://studentshare.org/miscellaneous/1613455-biometrics-hand-geometry-and-vein-check

CHECK THESE SAMPLES OF BIOMETRICS: Hand Geometry and Vein Check

...?Biometrics: Some Unseen Aspects Biometrics: Some Unseen Aspects Introduction Biometrics is the computerized method ortechnique of recognizing a person on the basis of physical or behavioral characteristics. Instead of the traditional security systems, the society today needs new verification systems to be in use; this is where the biometric authentication has gained its relevance. The production of biometric authentication systems has been increasing for the recent years. Numerous manufacturers and distributors have identified it as a growing industry. The technique has succeeded in preventing physical existence from highly protected environments. However the success of the method is still skeptical where network authentication... is...
4 Pages(1000 words)Assignment

Face Recognition : How is it used to protect us How accurate is it

...are the finger scan, ear scan, iris scan, retina scan, hand geometry, hand vein scan, personal signature, voice recognition. Finger Scan – this is the most commonly used biometrics and is the most practical and one of the fastest. The fingerprint of the index finger is scanned, and then transformed into a 27 point grid, which is the algorithm that will be stored in the database. It is not the actual finger print, but the algorithm which is the basis for identification. This biometric is commonly used in offices, to time-in employees, and in most schools and universities. Ear Scan – this is not so commonly used, and use is more often to...
14 Pages(3500 words)Research Paper

...and its radius 5) In parallel lines, it a straight line meets other two straight lines, and makes an interior angle of which both are less than 900, the two lines can meet if extended on those sides that they make angles less than right angles (the difference between lines in Euclidean and those of spherical are illustrated in spherical geometry). On the other hand, absolute geometry is more the same as ordered geometry. Therefore, almost all the theories in absolute geometry are compatible in ordered geometry. The fifth axiom is the only axiom that holds in neutral geometry (Eves, 1990). Euclid’s parallel; spherical and...
3 Pages(750 words)Essay

...? Biometrics (Add (Add (Add Biometrics Biometrics is the ultramodern means of identification of individuals basedon their biological as well as behavioral characteristics. Biometrics had been a popular topic of debate for a while especially in choosing it as the technology for security checks and access control. As Jain, Bolle and Pankanti (n.d) point out, biometrics will gradually become a prime appurtenance in identification technology especially for the following reasons: repeatedly falling prices of biometric sensors, advancement in the underlying technology, increasing awareness among the public regarding the merits...
2 Pages(500 words)Essay

... BIOMETRICS Introduction Biometrics refers to the unique personal, physical and measurable characteristics that can be used to identify an individual. The process involves both identification and verification of these traits. The identification process is different from the verification process in that verification involves comparison of the facial feature of a subject with the features of one other face to ascertain whether they match while identification involves comparison with several other faces to determine which of them accurately matches with the subject. There are various kinds of biometrics one of the most common being facial recognition. In facial recognition, the spatial geometry of the facial biometrics is recorded... . There are...
5 Pages(1250 words)Term Paper

...BIOMETRICS Information technology has revolutionized every aspect of our lives today. They have made our work simpler, fast and accurate. If we compare the technology of today to that of fifty years back, we will find that the advancements have surpassed the expectations of even the science fiction writers. The kind of technology and networking that exists around us has without doubt made life simpler for us. But, the extent to which it has made us safer is still being debated. While on the one hand we have advanced security gadgets, on the other the acts of sabotage too are being carried out in most sophisticated manner. Biometric technology is an effort to diagnose the problems and fill...
8 Pages(2000 words)Essay

...Geometry Geometry is a branch of mathematics that deals or attempts to explain and describe the shape, size, or relative position of an object in space. The study of geometry dates back to the time of ancient Greek. The Euclidian geometry for example originated in the 6th century and it laid the foundation for modern geometry. Currently, the study has advanced to include other branches of mathematics such as number theory, algebra, and topology. Riemannian geometry for example is among the latest braches of geometry. Each of the above fields of specialization has a different approach to the study of geometry (Mlodinow, 2002). Indeed, a good mathematician will view the different branches of geometry as mere tools designed to enable... ...
2 Pages(500 words)Admission/Application Essay

...Step Draw a line AB that we will be divided into 3 (in this case) equal parts. From point A, draw a line segment at an angle to the given line, and about the same length. The exact length is not important. Set the compasses on A, and set its width to a bit less than one third of the length of the new line. Step the compasses along the line, marking off 3 arcs. Label the last one C. With the compasses width set to CB, draw an arc from A just below it. With the compasses width set to AC, draw an arc from B crossing the one drawn in step 4. This intersection is point D. Draw a line from D to B. Using the same compasses width as used to step along AC, step the compasses from D along DB making 3 new arcs across the line Draw lines... Draw a line...
1 Pages(250 words)Speech or Presentation
sponsored ads
Save Your Time for More Important Things
Let us write or edit the research paper on your topic "BIOMETRICS: Hand Geometry and Vein Check" with a personal 20% discount.
GRAB THE BEST PAPER

Let us find you another Research Paper on topic BIOMETRICS: Hand Geometry and Vein Check for FREE!