Comments (0)
Add to wishlistDelete from wishlist
Cite this document
Summary
It has temple like porticoes on all its four sides with a square plan surmounted by a dome. This is characteristic of High Renaissance. The building has also has a piano mobile and a distinctive design.
Sacra…
Download full paperFile format: .doc, available for editing
HIDE THIS PAPERGRAB THE BEST PAPER94.7% of users find it useful 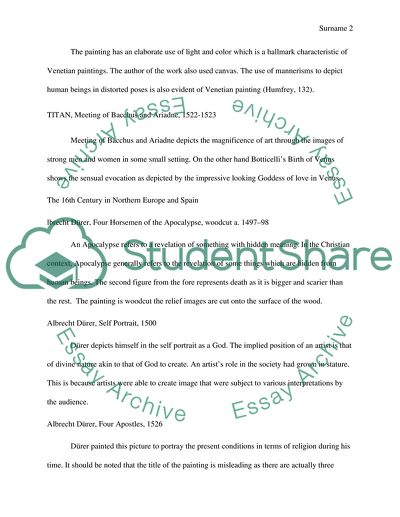 Andrea PALLADIO, Villa Rotonda, near Vicenza, Italy, ca. 1550-1570 The building is set on a hilltop and is based on classical culture. It has temple like porticoes on all its four sides with a square plan surmounted by a dome. This is characteristic of High Renaissance. The building has also has a piano mobile and a distinctive design.
Giovanni BELLINI, Madonna and Child with Saints
Sacra Conversazione has Italic origins with the meaning holy conversation. Attendant saints are grouped in a unified space around the Child and the Virgin. The main characteristics of High Renaissance are harmony and balance. The painting has a smooth and velvety surface architecture based on Venetian brushwork.
GIORGIONE, The Tempest, ca. 1510
The painting clearly shows the image of a young mother nursing a child and a man standing with a spear. On the background there is a river passing by and visible buildings on the river bank. The man is guarding the woman who has probably just given birth. Poesia describes the works of Italian Renaissance that were inspired by myths and fables.
TITAN, Pastoral Symphony, ca. 1508-1511
The painting has an elaborate use of light and color which is a hallmark characteristic of Venetian paintings. The author of the work also used canvas. The use of mannerisms to depict human beings in distorted poses is also evident of Venetian painting (Humfrey, 132).
TITAN, Meeting of Bacchus and Ariadne, 1522-1523
Meeting of Bacchus and Ariadne depicts the magnificence of art through the images of strong men and women in some small setting. On the other hand Botticelli’s Birth of Venus shows the sensual evocation as depicted by the impressive looking Goddess of love in Venus.
The 16th Century in Northern Europe and Spain
lbrecht Dürer, Four Horsemen of the Apocalypse, woodcut a. 1497–98
An Apocalypse refers to a revelation of something with hidden meaning. In the Christian context, Apocalypse generally refers to the revelation of some things which are hidden from human beings. The second figure from the fore represents death as it is bigger and scarier than the rest. The painting is woodcut the relief images are cut onto the surface of the wood.
Albrecht Dürer, Self Portrait, 1500
Dürer depicts himself in the self portrait as a God. The implied position of an artist is that of divine nature akin to that of God to create. An artist’s role in the society had grown in stature. This is because artists were able to create image that were subject to various interpretations by the audience.
Albrecht Dürer, Four Apostles, 1526
Dürer painted this picture to portray the present conditions in terms of religion during his time. It should be noted that the title of the painting is misleading as there are actually three apostles in the painting. The painting was presented to the magistrates after the Reformation. The painting seems to appreciate the role of scripture in the society but warns against false teachings. In essence, Dürer attempted to show Christianity from an artist’s point of view. He was not in opposition to Lutheran teachings but rather careful not to fall into false teachings. Also, the portrayal of one side with an open bible and the other closed is significant.
Work Cited
Humfrey, Peter. Painting in Renaissance Venice. Connecticut: Yale University Press, 2007. Print Read More
Share:
Tags
Cite this document
(“Art history Essay Example | Topics and Well Written Essays - 500 words - 2”, n.d.)
Art history Essay Example | Topics and Well Written Essays - 500 words - 2. Retrieved from https://studentshare.org/miscellaneous/1611490-art-history

CHECK THESE SAMPLES OF Art history

...of people who have died. It is important to look at the date of publication of this book and the six years that have past and the importance of social affirmation. "Modern commemorative art serves a psychological need of loss" and of closure. The AIDS Memorial Quilt is a commemorative work which promotes cohesion. Other commemorative works in Chapter 11: USA MARINE CORPS WAR (p 297) and the Vietnam Veterans Memorial, (p 1982) No other time in history have people been able to congregate in masses to mourn their losses. The most significant piece of architecture today is the computer designed Liberty Tower or 7TC. Land has been broken and it is scheduled to be finished in 2013. This site represents a...
5 Pages(1250 words)Essay

...? Art History: Byzantine Architecture from Ravenna, Italy and Japan’s Horyu-ji Temple - ??? One of the greatest cities in Italy where glorious glimpses of Byzantine Art can be found is the city of Ravenna, Italy (Fletcher and Cruickshank 282-320). In the city where the famous Basilica of San Vitale and the Basilica of Sant'Apollinare Nuovo is located, vestiges of Byzantine art and architecture can clearly be observed, reflecting the specific socio-cultural and historical contexts of the period when these structures were built (Fletcher and Cruickshank 282-320). Meanwhile, on the other part of the globe, lies the Horyu-ji Temple (???), one of the oldest existing wooden...
2 Pages(500 words)Essay

...1. Explain the differences and the similarities between Mannerism and Rocco. Mannerism was an art form that emerged towards the end of the Renaissance in Italy in 1600’s before Baroque art; Rococo was an 18th century French art movement focusing on style and was more popular in furniture, architecture and sculpture than in paintings. Similarities One of the major similarities between Mannerism and Rococo is that both had asymmetric features about their art works, unlike the unity and symmetry found in the Renaissance art. Mannerism was not “balanced and harmonious” like the Renaissance art (“Art History: Mannerism: (1520 - 1600)”, 2009).In fact, Rococo style loved asymmetry, though it was new to the European art. It considered... is that...
2 Pages(500 words)Essay

...The Changing Definition of Art What is the definition of art? Encyclopaedia Britannica gives the following definition: “the arts, also called fine arts, modes of expression that use skill or imagination in the creation of aesthetic objects, environments, or experiences that can be shared with others.” These “modes of expression” have been continuously changing throughout history. The change affects not only the technical means for creating art, but also the concept of “aesthetic objects”. If we look at the history of art from the 1800s to contemporary art, we can outline four major lines of change. First, the concept of beauty has changed. Art has always, in some way, been seen as an expression of beauty and harmony, especially... ...
4 Pages(1000 words)Essay

...Art History Introduction In modern civilizations, people have become familiarized to a consistent method of identifying individuals because of creation of approved documents such as passports and other formal identification documents. This regularity in names was not common ancient Italy. Artists were named by their hometown. This resulted in significant challenges for artists in archiving documents especially those who hailed from the same geographical location (Kleiner, 22). Nicola Pisano was one of the earliest artists specializing in carving marble reliefs and ornamentation of church platforms. He incorporated classical elements such as round arches instead of the common pointed ones resulting to...
4 Pages(1000 words)Essay

...Art History: Tracey Emin Insert Insert s 20 March 2001 Art History: Tracey Emin Introduction Tracey Emin was born in theyear 1963 in London. She studied fine art and printmaking at the Maidstone College of Art (Banks 2013) and later went to further her studies at the prestigious Royal College of Art in London. All these occurred after she left school at an early age. Despite her early school dropout, she managed to earn her master’s degree in painting at Royal College of Arts (Lane 2013). Today, she is based in London and she is also a member of Young British Artists, which she joined in the early 1990’s....
5 Pages(1250 words)Essay

...Art History Renaissance is recorded as the period immediately following the middle Ages in Europe. This method of painting, sculpture and stylish arts identified with the Renaissance emerged in Italy in the late 14th century; it reached its peak in the late 15th and early 16th centuries, in the work of Italian bosses, for example, Leonardo da Vinci, Michelangelo and Raphael. The authentic works of art of antiquated traditional Greco-Roman conventions, Renaissance symbolization caught the workmanship insight of the singular and the excellence and secret of the nature. Bahram Gur and Azada Historically the minai earthenware production outlines stories from the Persian...
1 Pages(250 words)Essay

...number Art History The artist, Van Gogh, set camp in Arles around 1888. Within the small Provencal town as well as the surrounding countryside, he sought to spend extraordinarily productive periods in activities of painting, writing, and drawing. Van Gogh went on to create this artwork at the river banks. One spot where the painting captures is close to the house he rented at the time. This view seen by the observer presents the houses from Rhone’s east side in evenings. His painting, ‘Starry Night’ is made of oil and developed on canvas. It features strong and definitive strokes of the brush using broken colour. Van Gogh has preference of painting outdoors coupled with the fascination of the night sky...
4 Pages(1000 words)Essay

...the marginal or central areas of the picture. In our image, the artist wanted to balance both the central and marginal areas. He painted the shapes on the central part and extended to the marginal areas of the picture area. Renaissance art is the style of painting, sculpture, and decorative works of the European history period known as Renaissance. This emerged as a style in Italy about 1400 in accordance with developments in philosophy, science, music, and literature. The philosophy spread all over Europe influencing artists in developing new techniques and new skills. Artists saw themselves reawakening the achievements of classical Roman culture. Lorenzo (c. 1378-1455) won a major competition in...
5 Pages(1250 words)Research Paper
sponsored ads
Save Your Time for More Important Things
Let us write or edit the essay on your topic "Art history" with a personal 20% discount.
GRAB THE BEST PAPER

Let us find you another Essay on topic Art history for FREE!