Comments (0)
Add to wishlistDelete from wishlist
Cite this document
Summary
Ancient Chinese civilization flourished both economically and culturally centuries ago. Cultural and geographical conditions are believed to be the main factors that led to the prosperity of the…
Download full paperFile format: .doc, available for editing
HIDE THIS PAPERGRAB THE BEST PAPER95.3% of users find it useful 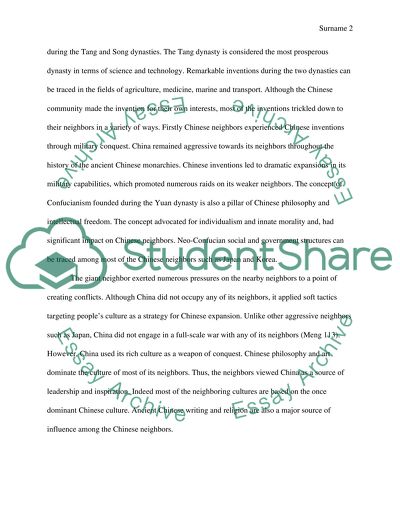 Extract of sample "History The World"

Download file to see previous pages China enjoyed its last golden age under the Ming dynasty, which was characterized by economic, political, and cultural revolutions. Under Zheng’s leadership, the Chinese navy developed tremendously and carried out numerous explorations around the world. This essay explores the different ways in which people experienced their giant Chinese neighbor. The essay also explores reactions towards the Chinese self-contained civilization.
Chinese growth and prosperity had significant influence on its neighbors, particularly India and Korea. During the era of imperial China, neighboring people considered China a source of intellect. The height of Chinese inventions in science and technology was realized during the Tang and Song dynasties. The Tang dynasty is considered the most prosperous dynasty in terms of science and technology. Remarkable inventions during the two dynasties can be traced in the fields of agriculture, medicine, marine and transport. Although the Chinese community made the invention for their own interests, most of the inventions trickled down to their neighbors in a variety of ways. Firstly Chinese neighbors experienced Chinese inventions through military conquest. China remained aggressive towards its neighbors throughout the history of the ancient Chinese monarchies. Chinese inventions led to dramatic expansions in its military capabilities, which promoted numerous raids on its weaker neighbors. The concept of Confucianism founded during the Yuan dynasty is also a pillar of Chinese philosophy and intellectual freedom. The concept advocated for individualism and innate morality and, had significant impact on Chinese neighbors. Neo-Confucian social and government structures can be traced among most of the Chinese neighbors such as Japan and Korea.
The giant neighbor exerted numerous pressures on the nearby neighbors to a point of creating conflicts. Although ...Download file to see next pagesRead More
Share:
Tags
Cite this document
(“History The World Essay Example | Topics and Well Written Essays - 1000 words - 1”, n.d.)
History The World Essay Example | Topics and Well Written Essays - 1000 words - 1. Retrieved from https://studentshare.org/miscellaneous/1610539-history-the-world

CHECK THESE SAMPLES OF History The World

The Raisin In The Sun

1 Pages(250 words)Assignment
sponsored ads
Save Your Time for More Important Things
Let us write or edit the essay on your topic "History The World" with a personal 20% discount.
GRAB THE BEST PAPER

Let us find you another Essay on topic History The World for FREE!