Why does the middle east is important to obama - Essay Example

Comments (0)
Add to wishlistDelete from wishlist
Cite this document
Summary
Or the numerous terrorism acts of Al Qaeda and other rebellious groups in Middle East and its neighboring countries? Both worth being penned in history books for they resulted to the lost million lives and…
Download full paperFile format: .doc, available for editing
HIDE THIS PAPERGRAB THE BEST PAPER91.8% of users find it useful 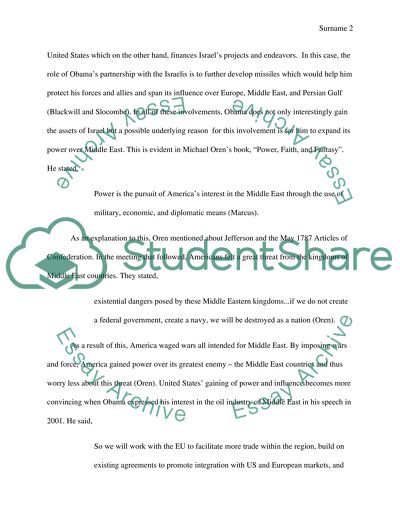 Instructions Why the Middle East is Important to Obama Who would not remember the 9/11 attack of Iraq on twin towers of America? Or the numerous terrorism acts of Al Qaeda and other rebellious groups in Middle East and its neighboring countries? Both worth being penned in history books for they resulted to the lost million lives and to the wavering security and peace in the countries involved. In these instances, however, the United States has no small role. Its involvement with establishing peace in Middle East is geared towards attaining power for itself.
As an advocate of and peace through dialogue and partnerships, Obama sees Israel as a way to unhide the terroristic pursuits of rebels in Middle East. This became evident in 2007 when a plutonium-producing reactor of Syria in cooperation with North Korea, was discovered. Israel released photographic evidence of the said partnership leading to the raid of the nuclear reactor in Deir ez-Zor region and the dismissal of a terrorism attempt (Blackwill and Slocombe).
Israel is skillful in making aerial systems, armored vehicle protection, and short-range rockets defenses, and robotics. It has been known as a world leader when it comes to developing devices and techniques for force protection (Blackwill and Slocombe). Because of the unifying goal of both countries to eliminate terrorism and nuclear proliferation, Israel shares its assets to United States which on the other hand, finances Israel’s projects and endeavors. In this case, the role of Obama’s partnership with the Israelis is to further develop missiles which would help him protect his forces and allies and span its influence over Europe, Middle East, and Persian Gulf (Blackwill and Slocombe). In all of these involvements, Obama does not only interestingly gain the assets of Israel but a possible underlying reason for this involvement is for him to expand its power over Middle East. This is evident in Michael Oren’s book, “Power, Faith, and Fantasy”. He stated,
Power is the pursuit of America’s interest in the Middle East through the use of military, economic, and diplomatic means (Marcus).
As an explanation to this, Oren mentioned about Jefferson and the May 1787 Articles of Confederation. In the meeting that followed, Americans felt a great threat from the kingdoms of Middle East countries. They stated,
existential dangers posed by these Middle Eastern kingdoms...if we do not create a federal government, create a navy, we will be destroyed as a nation (Oren).
As a result of this, America waged wars all intended for Middle East. By imposing wars and force, America gained power over its greatest enemy – the Middle East countries and thus worry less about this threat (Oren). United States’ gaining of power and influence becomes more convincing when Obama expressed his interest in the oil industry of Middle East in his speech in 2001. He said,
So we will work with the EU to facilitate more trade within the region, build on existing agreements to promote integration with US and European markets, and open the door for those countries who adopt high standards of reform and trade liberalisation to construct a regional trade arrangement (Marcus).
Controlling Middle East would give United States the chance to assure peace and security. It would also be able to increase its diplomatic relations by engaging on the oil industry and economy of the Middle East countries. Thus, Middle East is really important to Obama.
Works Cited
Blackwill, Robert D., and Slocombe, Walter B. “Israel: A true ally in the Middle East.” 31 Oct.
2011. Web. 27 Nov. 2012.
Marcus, Jonathan. “Obama Speech in Middle East in Full with Analysis.” 19 May 2011. Web.
27 Nov. 2012.
Oren, Michael B., and Myers, Joanne J. “Power, Faith, and Fantasy: America in the
Middle East, 1776 to the Present.” 18 Jan. 2007. Web. 27 Nov. 2012 Read More
Share:
Tags
Cite this document
(“Why does the middle east is important to obama Essay”, n.d.)
Why does the middle east is important to obama Essay. Retrieved from https://studentshare.org/miscellaneous/1609954-why-does-the-middle-east-is-important-to-obama

“Why Does the Middle East Is Important to Obama Essay”, n.d. https://studentshare.org/miscellaneous/1609954-why-does-the-middle-east-is-important-to-obama.
Comments (0)
Click to create a comment or rate a document

...?Middle East Politics The intrinsic relationship between religion and politics is greatly exposed by the developments in the Middle Eastern Politics and it is widely accepted that religious ideologies have been the basic factors affecting political ideologies in the region. There has been a long-lasting conflict in the Middle Eastern Politics between the ideology of Arab nationalism and the ideology of Islamic revival, which has incongruously added fuel on to the burning fire in the politics of this region. Significantly, the ideology of Arab nationalism was developed in the 1950s and 60s under the leadership of Gamal Abdel Nasser of Egypt and the Ba’ath Parties of Syria...
3 Pages(750 words)Essay

...: Civil War, Shiite community. One party state, chemical weapons. Background: Syria is situated in the south western part of Asia and is important on multiple accounts. One of these accounts is the neighborhood and demographic importance. Syria has its borders with Turkey, Israel and Lebanon. Hence the mere geography of Syria speaks of its strategic importance and mere turbulence in Syria would lead to the disturbance of balance in the entire region. Population of Syria makes up for around 22 million citizens and Syria is a multi cultural society that is relatively progressive in its outlook as compared to various other societies of the Middle East....
10 Pages(2500 words)Term Paper

...? Demonstrations in Middle East Demonstrations in Middle East By December the leader of Yemen had been forced out of power, and major protests were witnessed in Syria, Bahrain, Iraq, Jordan and Kuwait. Minor protests have taken place in Oman, Mauritania, the Palestinian Authority and Saudi Arabia (Haddad, Bsheer & Abu-Rish, 2012). Associated events outside the Arab World comprise of clashes in Israel, 2011, and protests in Iranian Khuzestan in April, 2011 by Arab minorities. The sectarian conflicts in Lebanon were explained as a spill out violence of the Syrian demonstrations, and; therefore, the regional Middle East demonstrations. This...
5 Pages(1250 words)Research Paper

...of Palestine of 1922 was borne out of the colonial designs of the British and French on the Middle East. Britain acquired Palestine, the Transjordan and Iraq, while France got Syria. It also embodied the promises these two European powers made to the Arabs and the Zionists, which eventually led to conflict. British encouragement of Zionist actions during the early years of the mandate led to increasing conflict between the Jewish immigrants and their Arab neighbors. As the Second World War loomed and the British recognized the importance of Arab support, they shifted their favors towards the Arabs at the expense of the Jewish communities who were now concentrated in fortified...
5 Pages(1250 words)Essay

...Effects of Gas/Oil Production of the Middle East over the Past 50 Years Some of the main oil producers in the Middle East include Saudi Arabia, UAE, and Iran. Oil production is said to run almost everything and the production endeavors of these three nations has greatly influenced their success for the last couple of decades (Stevens 6). In these three countries, for instance, the countries has seen an improvement in their international relations with some of the most influential countries of the world such the United States, Britain, Germany and Russia among others. Russia, in particular, has made huge investments in Saudi Arabia to ensure that the future of oil...
1 Pages(250 words)Admission/Application Essay

...: The ISIS’s (Islamic State of Iraq and Syria) transformation into IS (Islamic State) in 2014 affected the international relations of the Middle East by resulting in political and military imbalance in the region and by affiliating IS to the global network of religious terrorist organizations. Transformation: First of all, the crude form of IS (say, the Islamic State) was established in the year 1999, known as Jama’at al-Tawhid wal-Jihad. This group was formed in Jordan, under the leadership of Abu Musab al-Zarqawi. Axel Hunsicker stated that, “Zarqavi and his group helped finance, recruit, transport, and train Sunni Islamic extremists for the Iraqi resistance” (420). Besides, this organization...
9 Pages(2250 words)Research Paper

...Middle East: Women’s Rights and Veiling Practices Muslim women veil for different reasons. Drawing on the articles above, explain two different meanings for veiling. Be sure to provide an explanation of the foundation of each perspective. Why do various interpretations of veiling practices exist? The common meaning regarding veiling assumes a religious basis whereby according to Koran female gender ought to conceal their beauty except to certain people who include husbands and close members (Asser, 2006). Mostly, this to shun those of opposite gender sinning, which is utterly prohibited by Koran thus adherents especially women have no option but to comply (Asser, 2006). This perspective...
2 Pages(500 words)Essay

US Involvement In The Middle East Issues

...for the Middle East, it has always been an interesting topic of study (Fawcett). The Middle East is suffering due to countless number of difficulties like insufficiency of reliable democracy, political instability, uneven development of social and economic issues, the clash of globalization, to name just a few (Fawcett). Among all these drawbacks which this particular region of the world has been facing, the most dominating one for both present and future, seems to be the imbalance of power. Present and Future Significant Issue in the Middle East The imbalance of power is the root cause of the ongoing conflict between Palestine...
6 Pages(1500 words)Term Paper
sponsored ads
Save Your Time for More Important Things
Let us write or edit the essay on your topic "Why does the middle east is important to obama" with a personal 20% discount.
GRAB THE BEST PAPER

Let us find you another Essay on topic Why does the middle east is important to obama for FREE!