Comments (1)
Add to wishlistDelete from wishlist
Cite this document
Summary
According to Montessori, “the development of articulate speech occurs between the ages two and five – the age of perception in which the attention of the child is spontaneously directed to external objects and the memory is particularly attentive” (Montessori, The…
Download full paperFile format: .doc, available for editing
HIDE THIS PAPERGRAB THE BEST PAPER94.2% of users find it useful 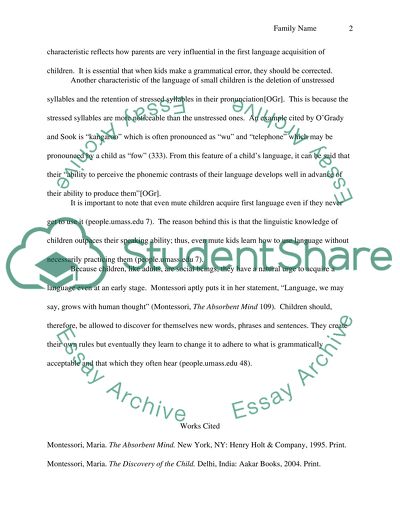 First Language Acquisition According to Montessori, “the development of articulate speech occurs between the ages two and five – the age of perception in which the attention of the child is spontaneously directed to external objects and the memory is particularly attentive” (Montessori, The Discovery of the Child Chapter 18). Montessori expounds further that parents and teachers must utilize these years to help a child develop his language skills. The language learning ability of small children is amazing because they can easily learn a new language with ease unlike adults.
The first step in language acquisition of small children is the determination of sounds. Children learn words by imitating the words they hear from the people around them (people.umass.edu 4). They may have difficulty at first to pronounce the words correctly, but as time goes by, they acquire the correct pronunciation of the words. O’Grady and Sook, however, argue that children do not just imitate, they make their own rules based on what they observe from adults (OGrady and Sook 327). This theory is proven by a common feature of small child’s language, which is the presence of grammatical mistakes. An example of this is when kids say “goed” instead of “went” or “gooder” instead of “better.” Children might not have heard these words but have concluded that they were the right words to say based on their observation of the speech of those who surround them.
There are two patterns in the child word learning, namely the referential and the expressive (pandora.ci.wwu.edu). Referential are the names of objects such as “dog” or “toy,” while expressive are the personal desires and social interactions such as “hi” or “good.” This characteristic reflects how parents are very influential in the first language acquisition of children. It is essential that when kids make a grammatical error, they should be corrected.
Another characteristic of the language of small children is the deletion of unstressed syllables and the retention of stressed syllables in their pronunciation (OGrady and Sook 332). This is because the stressed syllables are more noticeable than the unstressed ones. An example cited by O’Grady and Sook is “kangaroo” which is often pronounced as “wu” and “telephone” which may be pronounced by a child as “fow” (333). From this feature of a child’s language, it can be said that their “ability to perceive the phonemic contrasts of their language develops well in advance of their ability to produce them” (OGrady and Sook 332).
It is important to note that even mute children acquire first language even if they never get to use it (people.umass.edu 7). The reason behind this is that the linguistic knowledge of children outpaces their speaking ability; thus, even mute kids learn how to use language without necessarily practicing them (people.umass.edu 7).
Because children, like adults, are social beings, they have a natural urge to acquire a language even at an early stage. Montessori aptly puts it in her statement, “Language, we may say, grows with human thought” (Montessori, The Absorbent Mind 109). Children should, therefore, be allowed to discover for themselves new words, phrases and sentences. They create their own rules but eventually they learn to change it to adhere to what is grammatically acceptable and that which they often hear (people.umass.edu 48).
Works Cited
Montessori, Maria. The Absorbent Mind. New York, NY: Henry Holt & Company, 1995. Print.
Montessori, Maria. The Discovery of the Child. Delhi, India: Aakar Books, 2004. Print.
OGrady, William and Whan Cho Sook. "Chapter 10 – First Language Acquisition." n.d. 326-362. Print.
Pandora.ci.wwu.edu. First Language Acquisition. N.d. Web. 15 November 2012 .
People.umass.edu. First Language Acquisition. n.d. Web. 14 November 2012 . Read More
Share:
Tags
Cite this document
(“Fist Language Aquisition Essay Example | Topics and Well Written Essays - 500 words”, n.d.)
Retrieved from https://studentshare.org/miscellaneous/1608348-fist-language-aquisition

le
leonardo41 added comment 5 months ago
Student rated this paper as
I never thought 500 words essay could be written in such a free manner. I loved the research of this essay. Will definitely use it for my own work!

Matthew Effects in ReadingConsequences in the individual effects of language aquisition

...? Figurative language versus literal language October 24, Figurative language versus literal language Every language comes with a plethora of ways to color a message that someone is trying to convey or else to provide a creative way to help prompt an understanding between people. This can be done whether the words are written or spoken. Unfortunately, if someone does not know how to properly use certain language devices, such as those that make up figurative speech, they risk confusing the person that they are trying to communicate with. Not only will this lead to a misunderstanding of what is being said, but can also make it hard for...
3 Pages(750 words)Essay

...Language Introduction Language is a dynamic and living creature. Our lives are connected with it. We gain knowledge, share our experiences and develop our lives in terms of language. Language connects our lives and once this bound is violated, we come across a problem of a challenging choice: whether to live or not to live. The question of life and choice of the way we want to exist is challenged by the option of language oppression. Ethnic minorities are often prevented from a proper existence and their usual way of life in case their languages are suppressed and assimilated in accordance with “white standards” of European...
5 Pages(1250 words)Essay

...The Role of Language according to Kincaid and Baldwin Kincaid’s novel A Small Place is a piece that reflectsthe circumstances that have resulted in Antigua as due to post-colonialism effects. Kincaid describes what has become of her birthplace. The story surrounds the detrimental effects of the colonial era. On the other hand, Baldwin’s story, written in 1979, reflects the role of Black English, a language developed by people of color in the American society. Both pieces of literature reveal the role of language. Kincaid finds displeasure in the speech incompetence of the Antigua young people and the island at large for adopting the language of its colonizers. Baldwin...
5 Pages(1250 words)Essay

...? Key Concepts of Language Introduction Language can be considered to be one of the most essential capabilities amongst human beings and it is this phenomenon that distinguishes humans from the other creatures in the world (Trask, 2007). This doe not mean that they are not able to communicate but our development has allowed for a unification of actions on a global scale that would have not been capable by other species (Trask, 2007). Human beings have the most developed form of communications systems in the world and the foundation of this is the language that they use to transmit their messages. The ability to produce a clear and concise meaning of what an individual means to relay...
6 Pages(1500 words)Research Paper

...Second Language Aquisition and Perceptions of Native Language by Foreign in UK Colleges Dissertation proposal Dept School Introduction Anyone who has studied a second language as an adult and come away bilingual, or at least close to it, will tell you that one of the keys to success is practice. Practice, practice and then some more practice. And what better way to be able to this then to completely immerse yourself in the language by studying abroad As exciting and straightforward as this may appear foreign students living abroad come up against numerous barriers in their quest to become bilingual. At an age when peer pressures can pinch a hole in...
3 Pages(750 words)Essay

...Describe the language situation in a country where more than one language is spoken. The most stereotyped impression of a country where more than onelanguage is spoken is that, the multilingual country could be marked with chaos and confusion. However, far from being chaotic and confusing, nations in which more than one language is spoken do not share similar patterns with regards political and economic situation as these patterns are too intricate to establish. Linguistically and culturally, however, complex variations exist since language has a great influence on culture and other languages could influence another (Andersen 1984). This idea, also known...
3 Pages(750 words)Essay

Proposal for Aquisition of LifeCell

...Executive summary In today's business world competition has highly become competitive, budget-oriented planning or predict-based planning approaches are not sufficient for a big corporation to survive and flourish. Kotler (1998) clearly states that, for a company to survive and flourish in this competitive business world, it has to engage in strategic planning or management which clearly defines its objectives and examines both the inner and outer situations to formulate a strategy, implement that strategy, evaluate its progress, and make any adjustments where necessary to stay on the track. Among the strategies which companies have engaged to ensure their growth is acquisition, through acquiring small but potential companies... summary In...
10 Pages(2500 words)Essay

... Language Acquisition Language acquisition is a process that involves many stages. It is associated with the child first involving in making morphology errors as a result of them over-generalizing rules of grammar. For instance, a child starts learning language by first treating irregular verbs and nouns as regular. It then proceeds with the emergence of a child’s morphological rules. It is the acquaintance of the morphological rules that enable a child to pluralize names ending with a voiced sound by adding ‘z’ and those ending with voiceless consonants with ‘s (“Language Acquisition” 344). The process further advances to a stage where a child learns language agreement rule. For instance, it is through an English agreement rule... that a...
1 Pages(250 words)Essay

...Language Module Language Introduction According to UNESCO, English is currently the second most spoken language inthe world. Being so prevalent, one would expect that it would be viewed positively among its speakers. However, English has been blamed for adverse implications on the national identities of individual countries. This paper examines the nature and extent of the relationship between the struggles over the English language and the struggles over national identity. Discussion Since the advent of colonialism, the relationship between language, culture, and national identity has become more apparent. Language and culture are...
10 Pages(2500 words)Essay
sponsored ads
Save Your Time for More Important Things
Let us write or edit the essay on your topic "Fist Language Aquisition" with a personal 20% discount.
GRAB THE BEST PAPER

Let us find you another Essay on topic Fist Language Aquisition for FREE!