Comments (0)
Add to wishlistDelete from wishlist
Cite this document
Summary
The main causal factors of obesity are related to the eating habits. In most colleges, students rely on fast food for their meals. This is the case in University of Colorado…
Download full paperFile format: .doc, available for editing
HIDE THIS PAPERGRAB THE BEST PAPER96.1% of users find it useful 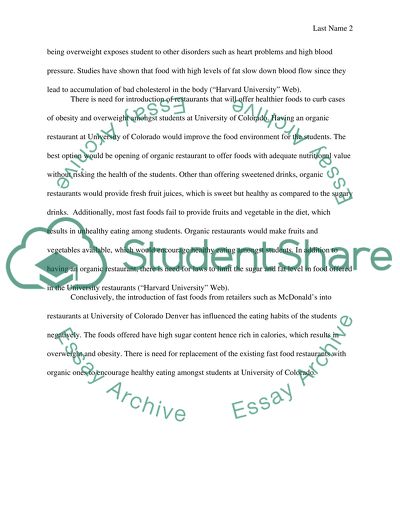 Fast Food Restaurants are Responsible for Obesity among Colorado Introduction The issue of obesity is a threat to many young people especially teenagers in high school and colleges. The main causal factors of obesity are related to the eating habits. In most colleges, students rely on fast food for their meals. This is the case in University of Colorado Denver, where student depend on fast foods from McDonalds and other fast food retailers. This has resulted to an alarming increase in cases of obesity and overweight problem among students in Colorado University. This essay focuses on the overall effect of fast foods on the health of students at Colorado University, who rely on food from restaurants such as McDonalds and taco bell. The essay will include a possible solution of bringing healthy restaurant that will encourage healthy eating to avoid obesity and overweight problems amongst students.
In the last three decades, Sale of fast foods in University restaurants has increased dramatically. Fast foods from retailers such as McDonald and taco bell are served school restaurants in most colleges and universities. Junk food and sweetened drinks are what most students at University of Colorado depend on. Most of them do so due to lack of other options. Snacks such as fries and burgers are very popular amongst students. Lack of healthy alternatives in the school restaurants make most students turn to eating junk food without considering the side effects (“Havard University” Web).
There are several risks associated with eating fast foods, which comprise of junks and snacks. The fast foods have high level of calories in addition to excess fat. The major risk is increase in cases of obesity and overweight. Overweight is associated with other problems such as low self-esteem amongst student, which can affect their academic performance. Additionally, being overweight exposes student to other disorders such as heart problems and high blood pressure. Studies have shown that food with high levels of fat slow down blood flow since they lead to accumulation of bad cholesterol in the body (“Harvard University” Web).
There is need for introduction of restaurants that will offer healthier foods to curb cases of obesity and overweight amongst students at University of Colorado. Having an organic restaurant at University of Colorado would improve the food environment for the students. The best option would be opening of organic restaurant to offer foods with adequate nutritional value without risking the health of the students. Other than offering sweetened drinks, organic restaurants would provide fresh fruit juices, which is sweet but healthy as compared to the sugary drinks. Additionally, most fast foods fail to provide fruits and vegetable in the diet, which results in unhealthy eating among students. Organic restaurants would make fruits and vegetables available, which would encourage healthy eating amongst students. In addition to having an organic restaurant, there is need for laws to limit the sugar and fat level in food offered in the University restaurants (“Harvard University” Web).
Conclusively, the introduction of fast foods from retailers such as McDonald’s into restaurants at University of Colorado Denver has influenced the eating habits of the students negatively. The foods offered have high sugar content hence rich in calories, which results in overweight and obesity. There is need for replacement of the existing fast food restaurants with organic ones to encourage healthy eating amongst students at University of Colorado.
Works Cited
Havard University. The Obesity Prevention Source Toxic Food Environment. 2012. Web. . 31 Oct 2012. Read More
Share:
Tags
Cite this document
(“English 2 Essay Example | Topics and Well Written Essays - 500 words - 2”, n.d.)
English 2 Essay Example | Topics and Well Written Essays - 500 words - 2. Retrieved from https://studentshare.org/miscellaneous/1607044-english-2

CHECK THESE SAMPLES OF English 2

... equality and sameness, which must be understood in order for cultures to co-exist. 2) Dear Residents of Sumner, Your anger is completely understood, especially if Fannie Taylor’s story is accurate, but you must look at this situation from the perspective of the people of Rosewood, if you truly want to work through your differences. You must begin by realizing that whites and blacks do have different cultures, although neither culture is superior or inferior. Despite these differences, however, neither culture believes that Fannie Taylor should have been assaulted, as this would have been a particularly heinous activity. Most people on both sides of this conflict would agree that this lone event was not responsible for the racial tension...
4 Pages(1000 words)Essay

However, it may not necessarily enjoy the status of an official language. American English has evolved over centuries but it was after the American Revolution that distinct alterations were made to it to reflect national and political independence from the British. Noah Webster is regarded as the founding father of the American English who realized the need for standardization of the language and worth of linguistic identity (Language Translation Inc., 2006).
According to surveys, English is considered as the official language in fifty-one countries and in twenty-seven states of America. Statistics show that it is the mother language of 82% of the population in the United States of America and almost 96% can actually speak it...
6 Pages(1500 words)Essay

Debate Surrounding the Standard and the Non-Standard English Language

Let us find you another Essay on topic English 2 for FREE!