Comments (0)
Add to wishlistDelete from wishlist
Cite this document
Summary
The relationship between Jack and Terri, if mutually attractive, could eventually be disastrous as it could lead to such issues like; moral damage or sexual defilement, resulting to serious legal repercussions. The effect of these could be reflected in the performance of the…
Download full paperFile format: .doc, available for editing
HIDE THIS PAPERGRAB THE BEST PAPER95.4% of users find it useful 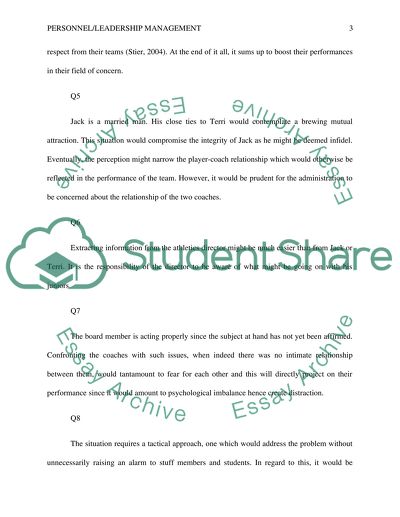 Personnel/Leadership Management The case of the two coaches who worked closely together. Q1 Coach Jack, a married man,is growing fond of Coach Terri, who is his colleague at his work place. The relationship seemed to be mutually attractive.
Q2
Though the nature of the relationship of the two coaches is not clear, it would be professionally unethical for two employees in the same organization to have an intimate relationship.
Q3
The relationship between Jack and Terri, if mutually attractive, could eventually be disastrous as it could lead to such issues like; moral damage or sexual defilement, resulting to serious legal repercussions. The effect of these could be reflected in the performance of the coaches thereby affecting the productivity of the concerned teams in sports.
Q4
Male and female coaches should take caution on how frequent they could be seen together. They should also consider what other people think of them. This would is because they are role models to people they are coaching and create the element of self-respect, respect for their colleagues, decency and their own profession. Either, they should be able to command respect from their teams (Stier, 2004). At the end of it all, it sums up to boost their performances in their field of concern.
Q5
Jack is a married man. His close ties to Terri would contemplate a brewing mutual attraction. This situation would compromise the integrity of Jack as he might be deemed infidel. Eventually, the perception might narrow the player-coach relationship which would otherwise be reflected in the performance of the team. However, it would be prudent for the administration to be concerned about the relationship of the two coaches.
Q6
Extracting information from the athletics director might be much easier than from Jack or Terri. It is the responsibility of the director to be aware of what might be going on with his juniors.
Q7
The board member is acting properly since the subject at hand has not yet been affirmed. Confronting the coaches with such issues, when indeed there was no intimate relationship between them, would tantamount to fear for each other and this will directly project on their performance since it would amount to psychological imbalance hence create distraction.
Q8
The situation requires a tactical approach, one which would address the problem without unnecessarily raising an alarm to stuff members and students. In regard to this, it would be sufficient to invite both the coaches for a dialogue, to sensitize them on the ongoing insinuations and highlight the effects of it (Stier, 2004). They should be advised to act in a manner that does not compromise their dignity in the eyes of their profession.
Q9
It takes both parties, in this case both coaches, to develop the affiliation for one another. Maybe, it could not have been a mutual attraction but, the coaches would have realized that such affiliated relationships can easily be misinterpreted even if it meant no harm to anybody (Stier, 2004). They should have related formally from the begging.
Q10
It all might not be what it seemed to be. It would be appropriate for the director not to propagate on the issue but only ask the board member for a little restraint, so as to find out what the real situation on the ground could be.
Q11
The director should talk to Jack in an attempt to discuss the issue, since they can comfortably talk about it. However, this should be done without the director mentioning to Jack that the issue was of interest to one of the board members as Jack might shy away from opening up to the director.
Q12
For the director to be responsible, he must have known that there existed a mutually attractive relationship between the coaches, if it indeed existed. However, it is not his mandate to handle such issues since the human resource department would be suitable to handle it. This would exonerate the director from the liability created by the coaches (Stier, 2004).
Q13
There would be a substantial difference if the situation was to occur in a collage set up. Otherwise, other factors withstanding, it would still be unprofessional to have intimate relationships between employees working for the same organization. The high schools comprise of minors who at this time experience the stage of self-realization, and they could be easily influenced by what other people do (Stier, 2004). The perception of intimate relationships might not marry the students’ psychological set up now, and it would only result to distraction. On the other hand, most people in collage are aware of intimate relationships and know how to differentiate right from wicked.
Reference
Stier, W. F. (2004). Athletic administration: Successful decision making, risk taking and problem
solving. Boston, Mass: American Press. Read More
Share:
Tags
Cite this document
(“Personnel/leadership management Assignment Example | Topics and Well Written Essays - 500 words”, n.d.)
Retrieved de https://studentshare.org/miscellaneous/1606205-personnelleadership-management

CHECK THESE SAMPLES OF Personnel/leadership management

Leadership And Management of Law Enforcement Personnel Within the Organization

...and others. Thus, HRM is the driving force behind all other resources and departments. This is what makes it central to the corporate plans and objectives. Because of such comprehensiveness, flexibility and integrity, decision making in HRM is also faster and better. Differences pertaining to line management Another major category of differences between the two is the kind of management practices and style adopted by the two disciplines. Managing people involve factors like leadership, communication, conflict handling, negotiation, facilitation and others. In the case of personnel management, it is restricted to following the contractual...
6 Pages(1500 words)Essay

...and impacts. Some of the major issues that are reflected from the case include the ineffectiveness of the trust’s leadership, management and hierarchical structure of organization, the culture of divisive inward looking, as well as the ineffectiveness of the doctors and generalist managers to deal with budgets and personnel. The new changes would include increased engagement of the employees, improved customer services, reformation of human resource management and development, and also focus more on the function of learning and development. 2. Impact of the Present Structure and Culture on the Changes Being Proposed: The Need and Positive Effects of the...
6 Pages(1500 words)Assignment

...The Board of Registered Nursing (n.d has defined unlicensed assistive personnel as the health care workers who are trained and certified, but are not licensed to perform nursing tasks. UAP refers to certified nursing assistants, home health aides, and patient care technicians, and does not include the family, friends, and relatives of the patient. It has been becoming a trend to hire unlicensed assistive personnel (UAP) in place of registered and licensed nurses since there is increasing need for accessible and affordable nursing care. Since nurses represent about 23 percent of the workforce and constitutes a very big percentage of labor costs, hiring UAPs who are paid 20 to 40 percent less, has enabled...
3 Pages(750 words)Assignment

... that the employees and the stakeholders work towards the set goals of the company. Training is essential in this course, as employees are taught on the objectives of the company and the requirements of achieving them. With the skills learnt in training, the realization of goals set in the strategic planning are made easier and possible to achieve (Klingner, Nalbandian & Llorens, 2010). References Klingner, D., Nalbandian, J., & Llorens, J. (2010). Public personnel management. (6th Ed). New York: Longman. (Klingner, Nalbandian & Llorens, 2010) Mikesell, J. (2013). Fiscal administration. (9th Ed). Belmont, CA: Wadsworth Publishers.... Sector Payment in lieu of taxes or otherwise referred to as PILOTs are most commonly paid by large landholding...
2 Pages(500 words)Essay

...). On the other hand, human resource management has previously been defined as the act of managing an organizations workforce and is responsible for attracting, selecting, training, assessing and the rewarding the workers (Price, 2011). The field of human resource management is also responsible for overseeing an organization’s culture in addition to its leadership as it ensures they comply with the set labor and employment regulations (Aswathappa, 2009). Storye provided numerous dimensions offering various difference points between the concepts of personnel management and human resource management. This paper reviews and...
6 Pages(1500 words)Essay
sponsored ads
Save Your Time for More Important Things
Let us write or edit the assignment on your topic "Personnel/leadership management" with a personal 20% discount.
GRAB THE BEST PAPER

Let us find you another Assignment on topic Personnel/leadership management for FREE!