Explantory synthesis : worst job you ever had - Essay Example

Comments (0)
Add to wishlistDelete from wishlist
Cite this document
Summary
Many times I have been forced to be around difficult people. Sometimes I have had disagreements with family members that seemed to extend for many weeks. School has also been trying on my patience…
Download full paperFile format: .doc, available for editing
HIDE THIS PAPERGRAB THE BEST PAPER98.9% of users find it useful 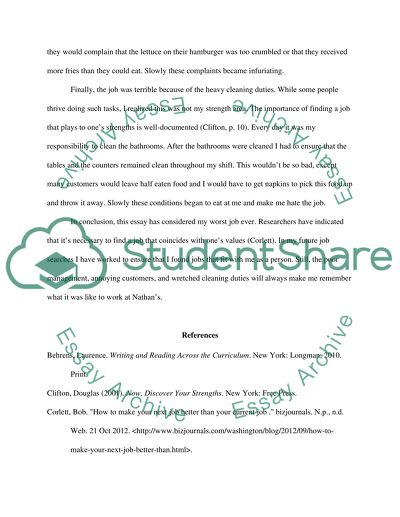 Extract of sample "Explantory synthesis : worst job you ever had"

Explanatory Synthesis: Worst Job You Ever Had Throughout my life I recognize I have had a number of terrible experiences. Many times I have been forced to be around difficult people. Sometimes I have had disagreements with family members that seemed to extend for many weeks. School has also been trying on my patience. Still, some of the worst experiences I have ever had have been at jobs. While I have had a number of difficult jobs, undoubtedly the worst job I ever had was as a food attendant at Nathan’s foods. This was the worst job ever because of the poor management, annoying customers, and the heavy cleaning duties. Following methods established in Writing and Reading Across Curriculums this essay provides an explanatory synthesis of this job (Behrens).
One of the worst aspects of the job was the poor management. I believe one of the most important things about any job is the ability to be promoted for one’s hard work. Indeed, it’s noted that one of the most important aspects of any job is the ability to be promoted (prolog). Upon starting work at the organization I was promised that my hard work could eventually lead to a promotion or a raise. After working for a month, however, I came to recognize that the organization was more willing to hire a constant cycle of new employees than to promote any current employees. This created a depressing environment as one’s friends were constantly leaving the store and I was left with no serious motivation.
Another prominent element that made my job the worst I ever had was the annoying customers. While many of the customers brightened my day, there was a significant amount of customers that complained about random things. It seemed that a large amount of these people simply wanted to get free food, as they would complain about random small things. For instance, they would complain that the lettuce on their hamburger was too crumbled or that they received more fries than they could eat. Slowly these complaints became infuriating.
Finally, the job was terrible because of the heavy cleaning duties. While some people thrive doing such tasks, I realized this was not my strength area. The importance of finding a job that plays to one’s strengths is well-documented (Clifton, p. 10). Every day it was my responsibility to clean the bathrooms. After the bathrooms were cleaned I had to ensure that the tables and the counters remained clean throughout my shift. This wouldn’t be so bad, except many customers would leave half eaten food and I would have to get napkins to pick this food up and throw it away. Slowly these conditions began to eat at me and make me hate the job.
In conclusion, this essay has considered my worst job ever. Researchers have indicated that it’s necessary to find a job that coincides with one’s values (Corlett). In my future job searches I have worked to ensure that I found jobs that fit with me as a person. Still, the poor management, annoying customers, and wretched cleaning duties will always make me remember what it was like to work at Nathan’s.
References
Behrens, Laurence. Writing and Reading Across the Curriculum. New York: Longman, 2010.
Print.
Clifton, Douglas (2001). Now, Discover Your Strengths. New York: Free Press.
Corlett, Bob. "How to make your next job better than your current job ." bizjournals. N.p., n.d.
Web. 21 Oct 2012. .
"The Importance Of Promotion And Career Advancement." prlog. N.p., n.d. Web. 21 Oct 2012.
. Read More
Share:
Tags
Cite this document
(“Explantory synthesis : worst job you ever had Essay”, n.d.)
Explantory synthesis : worst job you ever had Essay. Retrieved from https://studentshare.org/miscellaneous/1605982-explantory-synthesis-worst-job-you-ever-had

“Explantory Synthesis : Worst Job You Ever Had Essay”, n.d. https://studentshare.org/miscellaneous/1605982-explantory-synthesis-worst-job-you-ever-had.
Comments (0)
Click to create a comment or rate a document

CHECK THESE SAMPLES OF Explantory synthesis : worst job you ever had

The worst decision you ever made

...﻿Informative essay: The worse decision I ever made. Friendship was always very important to me. My best friend and I did everything together. We went to school together and played together. When I was 19 years old, my friend and I made the decision to start smoking together. I never would have thought that choosing to smoke would turn out to be the worst decision I ever made. Smoking cigarettes has since taken control of my mental and physical health. It has also had a bad impact on my finances. Smoking cigarettes had a bad impact on my mental stability. Smoking turned me into a person without a mind of my own. When I first decided to do it, it was...
2 Pages(500 words)Essay

Worst job you ever had

...? In the current scenario of recession, getting part time job has become extremely important. As a I too have been working part time to meetmy expenses. While many of my jobs were relatively okay and paid well, the work at ‘Claridge Fast food Restaurant’ was the worst job of my life. The place was deceptive in its exterior and reeked of dishonest intentions, both that of owners and workers. The place was tastefully furnished but was conspicuous in its lack of modern technology. The most interesting and perhaps the ridiculous was the owner’s perception towards the uniform of its workers. He believed that they should wear clothes of 1960s so as to provide the restaurant...
2 Pages(500 words)Essay

...at the expense of disseminating their ideologies and those of their parties to the citizens, the result is that the citizens’ expectations are contradicted. This in turn serves to erode the trust or minimize the level of trust that such citizens had on either of the politicians or their parties, resulting to a scenario where they opt out of the voting turnout, considering that the gainful information they expected to receive from the politicians is not achieved. The fundamental assumption of the Politeness Theory is that; all individuals are concerned with making a face (Watzlawick, 59). This assumption points to the fact that the electorate expects the politicians who are requesting for their votes to be humble and...
6 Pages(1500 words)Essay

Describe the worst team experience you have ever had. What did you do

...My worst team experience taught me a few lessons. From the years 2001 to 2004, I served in the intelligence core of the Israeli Army. Through out my service, my unit endured major structural changes and challenges. Constant terror attacks occurred almost on daily basis. When I first joined the unit, the officer in charge of the unit retired and left our unit 3 months later. The supposed to replace him took on another job leaving our Unit without a leading officer. The head of our branch called me in for a meeting and told me that although I had only served for 3 months, he felt I was good and I understood the operations of the unit. He asked me to fill in as head of our unit until they...
2 Pages(500 words)Essay

The Worst Job I Ever Had

...27 Apr. The worst job I ever had: Everybody has good and bad experiences of jobs. I too have had a time in life when I was into a very bad job. The worst job I had ever done was when I tutored the children in the Elementary School. From my experience, I can tell that teaching little children is much more difficult than teaching adults. Children live in their fantasy world and do not come to the class with an attitude that is conducive for learning. The age difference of a teacher with children in the Elementary School is so much that it may be very...
1 Pages(250 words)Essay

...Synthesis Scenario Auditory James should use Socratic learning method, where he should ask his what they know about symbolism, metaphor and simile. James must draw as much information from them as possible, filling gaps with his own expertise. Visual Visual tools can enhance and aid James in teaching, as then he can invite the students to participate in the lecture, which would keep them alert to the auditory environment as well. Kinesthetic James can adapt Kinesthetic learning strategy by asking students to use similes, metaphors and symbols in their daily conversations. He can initiate it by forming two teams, dividing up the class, and initiating a competition among them. This would make students active participants,...
2 Pages(500 words)Essay

...and accelerated the need to reunite with other minorities to champion for certain constitutional inclusions. Though they pursued the same course with other minorities, there was no sense of assimilation with them. Social Class analysis My grandfather’s social life would fall in the category of the middle class; this is so because when in the US, he was working as an engineer. Part of his early childhood education I understood was taken in Saudi Arabia before going to the US for further studies. His going to the US necessitated by a scholarship, which was granted to him soon after basic education. Despite the high-level discrimination at the time, he managed to secure himself a job in the US with the engineering...
5 Pages(1250 words)Essay

You can choose what ever you think

... of the of the The Feminist View of Oates’ Allegory Oates "Where are you going,where have you been?" brings the readers attention to the perverse nature of the current world. In the story, she demonstrates the social oddities that define the functions of men and women in the society; the subordination of women population in a patriarchal society perspicuous resemblance of themes of fantasy and reality, independence, and crime. The story is an example of a tale that holds a certain degree of comprehensiveness, covering a special theme that describes the condition of women in our society: their fantasy-based behavior and how they are often adversely treated by men. De Nittis (2008) observes that Oates places special significance... in the...
2 Pages(500 words)Research Paper

2 Pages(500 words)Assignment
sponsored ads
Save Your Time for More Important Things
Let us write or edit the essay on your topic "Explantory synthesis : worst job you ever had" with a personal 20% discount.
GRAB THE BEST PAPER

Let us find you another Essay on topic Explantory synthesis : worst job you ever had for FREE!