Comments (0)
Add to wishlistDelete from wishlist
Cite this document
Summary
Islam is also an Arabic word that simply means submitting to God’s will. It is a monotheistic religion in that the faithful believe in the existence of one God. Most of…
Download full paperFile format: .doc, available for editing
HIDE THIS PAPERGRAB THE BEST PAPER97.6% of users find it useful 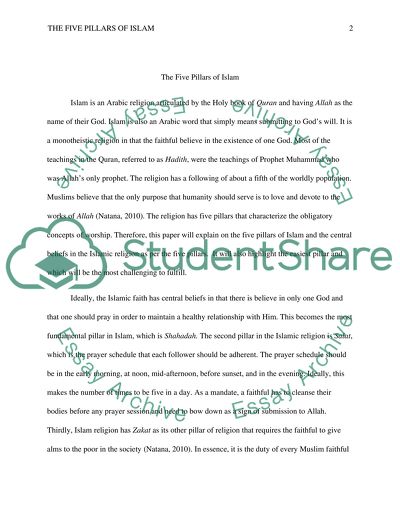 The Five Pillars of Islam The Five Pillars of Islam Islam is an Arabic religion articulated by the Holy book of Quran and having Allah as the name of their God. Islam is also an Arabic word that simply means submitting to God’s will. It is a monotheistic religion in that the faithful believe in the existence of one God. Most of the teachings in the Quran, referred to as Hadith, were the teachings of Prophet Muhammad who was Allah’s only prophet. The religion has a following of about a fifth of the worldly population. Muslims believe that the only purpose that humanity should serve is to love and devote to the works of Allah (Natana, 2010). The religion has five pillars that characterize the obligatory concepts of worship. Therefore, this paper will explain on the five pillars of Islam and the central beliefs in the Islamic religion as per the five pillars. It will also highlight the easiest pillar and which will be the most challenging to fulfill.
Ideally, the Islamic faith has central beliefs in that there is believe in only one God and that one should pray in order to maintain a healthy relationship with Him. This becomes the most fundamental pillar in Islam, which is Shahadah. The second pillar in the Islamic religion is Salat, which is the prayer schedule that each follower should be adherent. The prayer schedule should be in the early morning, at noon, mid-afternoon, before sunset, and in the evening. Ideally, this makes the number of times to be five in a day. As a mandate, a faithful has to cleanse their bodies before any prayer session and need to bow down as a sign of submission to Allah. Thirdly, Islam religion has Zakat as its other pillar of religion that requires the faithful to give alms to the poor in the society (Natana, 2010). In essence, it is the duty of every Muslim faithful to try to eliminate economic imbalance. This can be through donating part of their money, time, and services to those who are underprivileged. Essentially, families and businesses give two and half percent of the total cost of their valuables and savings.
In addition, the religion has Sawm as the fourth fundamental pillar, which is the ritual fasting as a sign of repentance. This comes in to pay especially during the Holy month of Ramadhan. During this month, Muslims abscond from eating drinking of having any sexual relations during daytime. The fasting helps the faithful to appreciate Allah for His provision, to repent their sins, and to keep the poor in mind. However, only the young children and those with severe medical conditions may not fast. Lastly, the fifth of Islam is Hajj that is simply the pilgrimage to Mecca before the faithful dies. This is to mean that Muslims should make the journey once in their entire life in order to fulfill the five fundamental pillars. Mecca is the holiest place on earth as per the Islamic faith in that the Muslims pray facing this city. In this journey, pilgrims wear white clothing when performing various rituals around the Kaaba. The Kaaba is a stone building at the center of Mecca city in which the faithful perform rituals like throwing stones to fight off evil (Natana, 2010).
In conclusion, the pillar that is easiest to fulfill for me would be the second pillar that is Salat. Prayer is a routine in my life in that when I do not follow the schedule I feel lost and unable to perform my daily tasks. On the other hand, the Hajj would be the most challenging pillar in Islam that might prove challenging to execute. In essence, the finances involved in taking this journey during the month of Dhul-Hijah might be too costly. Ideally, it will only be possible if my economic status would improve at some point in my life. This is to mean that the fulfillment of this pillar will depend on financial ability just like for many Muslims. Chances are that many Muslim faithfuls leave this world without fulfilling this pillar because of the expenses involved.
Reference
Natana, D. (2010). The Five Pillars of Islam: Oxford Bibliographies Online Research Guide. Oxford: Oxford University Press. Read More
Share:
Tags
Cite this document
(“HUM CHECKPOINT WK6 Essay Example | Topics and Well Written Essays - 500 words”, n.d.)
HUM CHECKPOINT WK6 Essay Example | Topics and Well Written Essays - 500 words. Retrieved from https://studentshare.org/miscellaneous/1605745-hum-checkpoint-wk6

...? False memories Introduction False memory basically refers to cases in which an individual’s recall of an event is different from the way it happened or perhaps in a more extreme case, the individual remembers events that never happened at all. The nature of false memories is such that it can be very vivid and held in high confidence. This makes it increasingly difficult to convince a person that the memory in question is wrong (Roediger and Marsh, 2009). However Loftus’s take pertaining to false memories is clearly different; She defines memories as precious and significant contributors to an individual’s identity. They are responsible for the creation of bonds with other human beings due to a shared past. Memories might seem... False...
14 Pages(3500 words)Essay

...Wk 6 (22) Behavior therapy is important because it can work in situations where changed needs to happen but other types of therapy have not worked. It is generally used to help an individual change a behavior. This therapy expects the individual to be very active in the therapeutic process. Goals and objectives are very important and are decided upon by the therapist and the client. Behavior therapy also works on current problems rather than delving into the past. Clients are expected to monitor their behavior in and out of therapy by practicing skills of self-management that they have learned inside the counseling session. These techniques are used to help them in their daily lives. Emphasis is placed on self-control... 6 (22) Behavior...
2 Pages(500 words)Essay

...MEMORY: REPRESENTATION AND MANIPULATION OF KNOWLEDGE Memory: Representation and Manipulation of Knowledge Zea S. Santiago Manila, Philippines MEMORY: REPRESENTATION AND MANIPULATION OF KNOWLEDGE 2 Abstract One’s memory can be represented using visual codes and verbal codes. Coding preference is under the discretion of an individual. He might be comfortable in using visual coding and mental imagery, versus verbal coding and explanation. He might be more functional in using one of these ways, so he might as well stick to it most of the time. Either way, the one which is more appealing to him may be his choice all throughout his lifetime. No one hinders someone from making decisions like this because each of us is unique... REPRESENTATIO...
2 Pages(500 words)Essay

...Checkpoint: of Ethics Imagine that you are starting your own company. What will be the ethical of your company?” Ethical of Conduct: a) Trust confidence and credibility Employees need to conduct themselves in such a manner that promotes good relation and co-operation between them and within the work environment as well. The public confidence in a company is largely a result of combined accomplishment of all the employees. Therefore, employees need to deal with their peers in a balanced and fair way. b) Integrity The core value of code of ethics is integrity. Employees need to adhere with high standard behavior (candidness and honesty) in their course of action and in their relationships, with their fellow workers. c)...
1 Pages(250 words)Essay

...Unions Supervisors Unions are groups of employees working in different places that assist employees in collective bargaining. The employees have the right to form, join, or participate in union activities outside working hours in the company. A union supervisor, often chosen from union members must juggle between the needs of his employer and the employees he is representing (Rue, & Byars, 2011). As a supervisor of a manufacturing plant, I owe my loyalty to both the union members and the management. In case, I overhear employees in the union planning to take complaints to upper management, I will take the following action. First, I will call for an impromptu meeting with the union officials and discuss the matter at hand... Supervisors Unions ...
1 Pages(250 words)Essay

...Associate Level Material Appendix H Monotheistic Religion Elements Matrix Judaism Christianity Islam Countries of origin This religion is among the oldest religions existing today. It began from Hebrew nation, from the beliefs and practices of Israel. This religion exists in ancient Israel, which is near the east Canaan and has its headquarters in Jerusalem (Azmah, 2004). Christianity originated from Judaism in 1st century and founded on teachings, life, death, and the resurrection of Jesus Christ. It originated from Levant region of middle east and increased over the decades (Azmah, 2004). Islamic religion originated in 622 C.E. in the Arabian peninsula. In 8th century ad, translation of Islamic philosophy into Arabic and 9th... Level...
2 Pages(500 words)Essay
sponsored ads
Save Your Time for More Important Things
Let us write or edit the essay on your topic "HUM CHECKPOINT WK6" with a personal 20% discount.
GRAB THE BEST PAPER

Let us find you another Essay on topic HUM CHECKPOINT WK6 for FREE!