Comments (0)
Add to wishlistDelete from wishlist
Cite this document
Summary
A number of studies have so far be carried out on the emerging dental health needs of the children of Saudi Arabia and also those with special needs among them (Al-Banyan, Echeverri, Narendran and Keene, 2000; Al-Malik and Rehbini, 2006; Murshid, 2005). These studies have…
Download full paperFile format: .doc, available for editing
HIDE THIS PAPERGRAB THE BEST PAPER92.2% of users find it useful 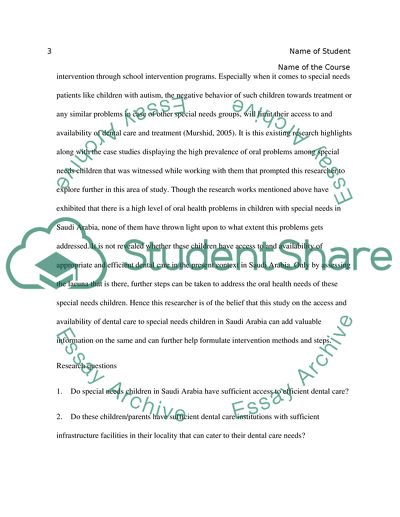 ...introduction of reforms.” (Butt 4) The signs of reforms were clearly during last years of king Fahd’s reign. In 2003, Saudi Arabia made a bold initiative by preparing the ‘Charter to Reform the Arab Position’ in order to inspire the political reforms the country as well as in the Arab world. In an article, it is reported that the Charter urges “Arab states to recognize the need for internal reform and greater participation by citizens in the political process as important steps toward the development of Arab human resources and the democratization of the Arab world” (Al-Faisal 27). According to his promise, taken in a public meeting in 2003, to “proceed with the dialogue and introduce...
7 Pages(1750 words)Essay

...into Islamic faith, the constitution of Saudi Arabia has been the Holy Koran. The Islamic law, called Shari’a guides the country. The King is bound by such laws, along with the advice of Ulema, the religious scholars. The status of women has improved, as compared to the same that was prevalent during the pre-Islamic period, in Arabian region. However, the same needs lot of further reforms, as the present laws are definitely against females. Incidentally, Saudi Arabia is the only country in the world, where women are not allowed to drive. The oil boom, starting from 1950-60 has brought prosperity and huge economic development to the nation, which is...
15 Pages(3750 words)Research Paper

...defects, gum disease, less teeth, tooth decay, and oral sores (World Health Organization, 2013). This study particularly focuses on special needs patients and how their conditions affect their day-to-day routines, and how he people taking care of them ensure they have all their necessities. It will also go into depth of how difficult it is for them to obtain and maintain good oral health, and suggest the potential strategies that can apply in enhancing and maintaining their good oral health. According to Gluck & Morganstein (2003), the United States has an estimated 53 million physically or mentally impaired people. One of the major problems that special...
8 Pages(2000 words)Research Paper

...from the al-Sa’ud family. The King appoints the provincial governors. Each province has appointed council of private citizens and officials who report local issues to the Minister of the Interior based at Riyadh (Janin and Besheer 31). Therefore, the King has representatives at all levels of the government and needs not to be physically present in each village. Conclusion Saudi Arabia is an expansive monarchial country rooted in the Islam religion. With a bigger portion of the country being a desert, oil drives the country’s economy. The lifestyle of the people of Saudi Arabia significantly differs from that of the Westerners, largely guided by the...
5 Pages(1250 words)Research Paper

..., but little of these catches found their way to the local market. When it did hit the local market, the price of fish was relatively higher while those in the interior have found it non-existent or unacceptably cost-prohibitive. A great deal of this is due to the Kingdom’s increase in trade in the traditional fishing market in the 1970s as well as the expansion of fishing activities within the Caribbean. The government of the Kingdom of Saudi Arabia undertook a careful study of the fish resources present in the kingdom’s territorial waters in both the Gulf and the Red Sea in the 1970’s. The study was conducted in partnership with the British White and the Food and Agriculture...
6 Pages(1500 words)Essay

...”). In contrast to the United States, the labor laws of Saudi Arabia are less diverse and are weakly implemented. The inclusion of women and domestic workers in the labor laws were only a recent addition in Saudi Arabia; whereas, in the United States, these standards were set in their earliest labor laws. Immigration/Labor supply Immigration to Saudi Arabia has increased throughout the years because of many prospective jobs that have now become available (Maps of the World “Saudi Arabia”). The oil industry has drawn in many immigrants and laborers from neighboring countries like...
7 Pages(1750 words)Admission/Application Essay

...Saudi Arabia is a kingdom in the Arabian Peninsula, which is ruled by a king who combines legislative, judicial, and executive functions when administering the country. Either the law of the country is generally made by a royal decree from the king or the constitution of this state is the Quran. Although this country is often perceived to be a totalitarian state by many people in America, its political system has worked for the last century and not only has it done this, but it has also led to a great deal of development for its people. The Saudi Arabian government has used the oil wealth of the country for the benefit of its people and it has put a lot of investment not only in...
2 Pages(500 words)Research Paper

...Special Teacher Training in Saudi Arabia Thesis Proposal: Preparing Deaf Teachers to Teach in Primary Schools for the Deaf in Saudi Arabia Introduction Until 1958, people with disabilities did not receive any special education provided by the government (Alquraini, 2011). Parents of children with disabilities were responsible for educating their children, in addition to any other special services their children needed. State provision of special education began in 1958 when a handful of blind students was enrolled in what were called "scientific institutes". Then in 1962, the government established the Department of Special Learning whose mandate was to improve the provision of special education to three categories of students... with...
5 Pages(1250 words)Thesis Proposal

...of the King Saud University to support the educational needs of autistic children. (Al - Ja’am, et al, pg.95) An international trend that is being adopted by the Gulf States including Saudi Arabia is that of early interventions, whereby the special needs students are prepared to join mainstream schools. An important part for development of students with Downs Syndrome is by making them interact with other children. This step ensures that such children have access to the full range of educational opportunities which are available. One of the major challenges faced by the government is the shortage of trained manpower to...
18 Pages(4500 words)Research Paper

...﻿Ophthalmic Care Delivery Alwadani, alongside his co-authors, performed a study between November 2007 and February 2008 to determine the trends in practice pattern among the present ophthalmology residence in Saudi Arabia. The primary health care provider, in Saudi Arabia, is the Ministry of Health (MOH). This institution makes significant efforts to ensure that it provides modern ophthalmic care to its citizens. Other researchers have also established that MOH spends more than 10 percent of its heath care resources to eye care (Alwadani et al. 2010). The current ophthalmic care system has made significant progress since 1982 with the launch of the King Khaled Eye Specialist Hospital (Alwadani et al. 2010). Statistics indicate... to ensure...
2 Pages(500 words)Assignment
sponsored ads
Save Your Time for More Important Things
Let us write or edit the research proposal on your topic "Access and Availability of dental care to Paediatric special needs patients in Saudi Arabia" with a personal 20% discount.
GRAB THE BEST PAPER

Let us find you another Research Proposal on topic Access and Availability of dental care to Paediatric special needs patients in Saudi Arabia for FREE!