Comments (0)
Add to wishlistDelete from wishlist
Cite this document
Summary
Lieutenant Zebulon Pike’s capture in the hands of the Spaniards in the 18th century contributed significantly in the history of the modern day Colorado. According to Ubbelohde, Benson, and Smith, the U.S. Army gave him his first opportunity to explore the Louisiana Purchase of…
Download full paperFile format: .doc, available for editing
HIDE THIS PAPERGRAB THE BEST PAPER94.9% of users find it useful 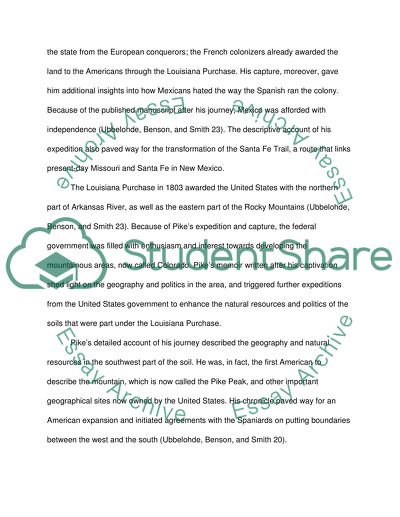 Zebulon Pike’s Capture Lieutenant Zebulon Pike’s capture in the hands of the Spaniards in the 18th century contributed significantly in the history of the modern day Colorado. According to Ubbelohde, Benson, and Smith, the U.S. Army gave him his first opportunity to explore the Louisiana Purchase of the state under the presidency of Thomas Jefferson inn 1806 (20). His team was a follow-up of the successful expedition of Lewis and Clark in the northwest part of the present day Oregon (Lawson, Cerveny, and Mock par. 2). Pike’s errors while traversing to find the Red River made him discovered the strengths and weaknesses of the Spanish military, as well as the Spanish dwellers in the area who claimed to be the territorial owner of the place. When they were arrested by Governor Joaquin Del Real Alencaster after intruding a Spanish-owned Conejos River, Pike was able to gather information about the Spanish government and lifestyle in the area as evident by the writings in his memoir. He wrote all the scenery that his team had gone, as well as the distance they travelled from one place to another. His capture enhanced the knowledge of the Americans who bought the land beyond Mississippi River since the land was largely unknown to the Americans. For instance, their journey led them to a peak which he described as a “small blue cloud” (Ubbelohde, Benson, and Smith 20). History books would tell that Pike never reached the summit of the assumed Mount Miller.
Pike’s contribution to the Colorado history is shown in the agreement signed between the United States and Spain in 1819, clearly dividing each territory along the Arkansas River and the Continental Divide. It clearly established the territorial power of the state from the European conquerors; the French colonizers already awarded the land to the Americans through the Louisiana Purchase. His capture, moreover, gave him additional insights into how Mexicans hated the way the Spanish ran the colony. Because of the published manuscript after his journey, Mexico was afforded with independence (Ubbelohde, Benson, and Smith 23). The descriptive account of his expedition also paved way for the transformation of the Santa Fe Trail, a route that links present-day Missouri and Santa Fe in New Mexico.
The Louisiana Purchase in 1803 awarded the United States with the northern part of Arkansas River, as well as the eastern part of the Rocky Mountains (Ubbelohde, Benson, and Smith 23). Because of Pike’s expedition and capture, the federal government was filled with enthusiasm and interest towards developing the mountainous areas, now called Colorado. Pike’s memoir written after his captivation shed light on the geography and politics in the area, and triggered further expeditions from the United States government to enhance the natural resources and politics of the soils that were part under the Louisiana Purchase.
Pike’s detailed account of his journey described the geography and natural resources in the southwest part of the soil. He was, in fact, the first American to describe the mountain, which is now called the Pike Peak, and other important geographical sites now owned by the United States. His chronicle paved way for an American expansion and initiated agreements with the Spaniards on putting boundaries between the west and the south (Ubbelohde, Benson, and Smith 20).
Works Cited
Lawson, Merlin P., Randy Cerveny, and Cary Mock. “Zebulon Pike: Great American
Explorer or Climate Spy?” Weatherwise. Taylor & Francis Group, 2010. Web. 17
Oct. 2012.
Ubbelohde, Carl, Maxine Benson, and Duane A. Smith, ed. A Colorado History. 9th ed.
Boulder, CO: Pruett Publishing, 2006. Print. Read More
Share:
Tags
Cite this document
(“Pikes capture by the Spanish 19th century ( colorado history ) Essay”, n.d.)
Pikes capture by the Spanish 19th century ( colorado history ) Essay. Retrieved from https://studentshare.org/miscellaneous/1605535-pikes-capture-by-the-spanish-19th-century-colorado-history

Whether Organizations Should Use Formal Mentoring Schemes

...Kiowa Tribe Kiowa Indians come originally from the Western Montana, from the headwaters of theYellowstone River. The first interaction with the white men happened in about 1700 when European traders came across the Kiowa Indians. The Kiowa moved to the southeast where they came in contact with the Crow Indians. The two tribes formed an alliance and Kiowa settled to the east of the Crow tribe at the end of 18th century. Later on, in the early 19th centuries the two tribes were pushed south to the Arkansas River. They stationed themselves in southeastern Colorado, western Kansas, and western Oklahoma. They had some fights with Comanche, who were more populous tribe, but...
2 Pages(500 words)Essay

...Order 124133 May 4, 2006 19th Century Medievalist Poetic Comparison In the nineteenth century, a romanticizing of the Middle Ages became a popular part of England's culture known as Medievalism. Medievalism is a term used to describe that which holds characteristics of the Middle Ages. Knights performing acts of chivalry, damsels in distress, magical beings, and internal struggles between loyalty and passion are prominent identifying aspects of medieval literature. Tennyson's The Lady of Shalott and Morris's The Defense of Guinevere are both great examples of nineteenth century medievalism. A better understanding of medievalism is gained by comparing and contrasting these...
6 Pages(1500 words)Essay

...masters might enslave the body, but freed the soul through Christianity. Even today in the twenty-first century a white supremacist argument becomes without slavery, African Americans would not have become Christians. The discounting of missionary visits is prominent in pro-slavery Americans’ point of view. Christian masters did provide a relief to slaves within the slavery system. Christian masters would take into consideration slave families. For example: In 1836 Bro. Albert Sibley of Bedford, Kentucky, sold me for $850 to Bro. John Sibley, and in the same year he sold me to Bro. William Gatewood of Bedford, for $850. In 1839 Bro. Gatewood sold me to Madison Garrison, a slave trader of Louisville, Kentucky,...
2 Pages(500 words)Essay

...Thomas Paine was one of the most prominent individuals who was a catalyst for Americans to fight for liberty against the British Rule. In this philosophical argument, Paine elaborates on the fallacies of the King’s cruel regime. In this particular work of his, Paine is very keen to compare the liberation movement of France from the colonies. In this particular work, he refutes Edmond Burke’s idea, who supported American independence movement but not the French revolution. Hence, Paine’s aim was to elaborate upon the concepts and components of grievances that induced individuals to rebel against their leaders. Tom Paine’s in his literary work the “Rights of Man” described King George as a “royal brute.” In the first part... Paine was one of...
2 Pages(500 words)Essay

World History of the 18-19th century

...in defining the housework done by women in the pre-industrial America. With evident examples borrowed from letters and diaries she covers the labor of women from sewing, cooking, and cleaning to tending animals and gardens and making beer, cider, butter, and cheese. Women provided or were involved in the production of goods for local barter or direct family consumption (Boydston, 105). Inasmuch as crucial individuals in the economy (and entire) family, Boydston further argues that their role in driving the economy did reflect to social or political power. Overall, the society or communities remained entirely patriarchal. Boydston’s depiction of women’s housework during the antebellum days is more annoying. Women of the nineteenth...
5 Pages(1250 words)Book Report/Review

7 Pages(1750 words)Coursework
sponsored ads
Save Your Time for More Important Things
Let us write or edit the essay on your topic "Pikes capture by the Spanish 19th century ( colorado history )" with a personal 20% discount.
GRAB THE BEST PAPER

Let us find you another Essay on topic Pikes capture by the Spanish 19th century ( colorado history ) for FREE!