Rift Valley and Jane Axtell or The Chairman - Essay Example

Comments (0)
Add to wishlistDelete from wishlist
Cite this document
Summary
Work environments differ based on specific variables, but these environments can also exhibit similar aspects or components based on some of the underlying variables. In this respect, work in two different contexts can be compared, thereby noting existing or emerging…
Download full paperFile format: .doc, available for editing
HIDE THIS PAPERGRAB THE BEST PAPER96.3% of users find it useful 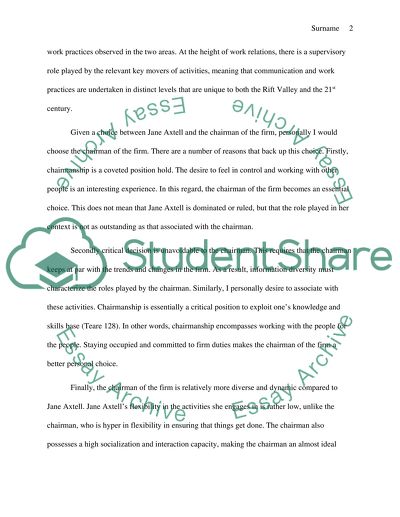 Extract of sample "Rift Valley and Jane Axtell or The Chairman"

The Rift Valley and the 21st Century Work environments differ based on specific variables, but these environments can also exhibit similar aspects or components based on some of the underlying variables. In this respect, work in two different contexts can be compared, thereby noting existing or emerging similarities, differences, or both (ASPA 89). The Rift Valley and the 21st century serve as key examples in such environments. Characterized by outstanding differences, variables, and parties or stakeholders, both the Rift Valley and the 21st century can be linked by distinctly observable aspects.
There are a number of persons, parties or stakeholders involved in both scenarios; the Rift Valley and the 21st century. These parties are charged with different duties and responsibilities, but the common denominator is that they work towards a common goal or purpose (Dow 212). On the same note, there are distinct mechanisms through which the required processes are undertaken or ways through which the involved parties interact. In this respect, there is an aspect of work setting established in both the Rift Valley and the 21st century.
Interaction and relations are also at stake in different levels. The extent of interaction between parties in the Rift Valley and those in the 21st century, however, vary according to the work practices observed in the two areas. At the height of work relations, there is a supervisory role played by the relevant key movers of activities, meaning that communication and work practices are undertaken in distinct levels that are unique to both the Rift Valley and the 21st century.
Given a choice between Jane Axtell and the chairman of the firm, personally I would choose the chairman of the firm. There are a number of reasons that back up this choice. Firstly, chairmanship is a coveted position hold. The desire to feel in control and working with other people is an interesting experience. In this regard, the chairman of the firm becomes an essential choice. This does not mean that Jane Axtell is dominated or ruled, but that the role played in her context is not as outstanding as that associated with the chairman.
Secondly critical decision is unavoidable to the chairman. This requires that the chairman keeps at par with the trends and changes in the firm. As a result, information diversity must characterize the roles played by the chairman. Similarly, I personally desire to associate with these activities. Chairmanship is essentially a critical position to exploit one’s knowledge and skills base (Teare 128). In other words, chairmanship encompasses working with the people for the people. Staying occupied and committed to firm duties makes the chairman of the firm a better personal choice.
Finally, the chairman of the firm is relatively more diverse and dynamic compared to Jane Axtell. Jane Axtell’s flexibility in the activities she engages in is rather low, unlike the chairman, who is hyper in flexibility in ensuring that things get done. The chairman also possesses a high socialization and interaction capacity, making the chairman an almost ideal person to associate with. For these reasons, the chairman is an outstanding character, thus my preference of the chairman to Jane Axtell.
Works Cited
American Society for Personnel Administration (ASPA). Work in the 21st century: an anthology of writings on the changing world of work. Michigan: University of Michigan, 2007.
Dow, Phil. “School in the Clouds”: The Rift Valley Academy Story. New York: William Carey Library, 2004.
Teare, Andrew. The Chairman. New York: AuthorHouse, 2005. Read More
Share:
Tags
Cite this document
(“Rift Valley and Jane Axtell or The Chairman Essay”, n.d.)
Retrieved from https://studentshare.org/miscellaneous/1604748-rift-valley-and-jane-axtell-or-the-chairman

(Rift Valley and Jane Axtell or The Chairman Essay)
https://studentshare.org/miscellaneous/1604748-rift-valley-and-jane-axtell-or-the-chairman.

“Rift Valley and Jane Axtell or The Chairman Essay”, n.d. https://studentshare.org/miscellaneous/1604748-rift-valley-and-jane-axtell-or-the-chairman.
Comments (0)
Click to create a comment or rate a document

...?Analyse the role of childhood in Jane Eyre. The novel Jane Eyre tells the story of a young woman from the age of about ten until her marriage in adult life to Mr Rochester. There are two contrasting views of childhood in the book, and they are the childhood of orphaned and impoverished Jane herself, along with the children in Lowood school on the one hand and the childhood of her cousins, the Reeds, and of her own pupil, Adele, on the other hand, who all come from an upper class background. The book explores the pros and cons of growing up in both of these social classes and this is one of the main themes of the novel. This paper considers the representation of working class childhood...
4 Pages(1000 words)Coursework

...Jane Eyre Jane Eyre is one of a kind story about women in that Victorian Period. The main character, Jane Eyre, growing as a humble, polite, orphan girl who was always under oppression from her guardian, Mrs. Reed and school teacher, Mr. Brocklehurst, managed to become an autonomous lady. In a society where women always became oppressed and their voices could not be heard, the author, Jane Eyre, tried to bring out the plight of women by the use of the character, Bertha Mason. Jane Eyre, by using Bertha Mason, present her own plight and other women through anger, feeling of entrapment and madness. Jane Eyre, in using the character, Bertha...
4 Pages(1000 words)Essay

...? APPLE INC. CHAIRMAN’S MENT College: Apple Inc. Chairman’s ment Introduction I have the pleasure of presenting Apple’s annual report of the year ended 2010. Apple Inc is an organization that has strived to satisfy the world’s demand for information technology infrastructure. During the fiscal year 2010, the company managed to come out successful amid the severe challenges in the market environment that have developed over the years in the IT industry. Today, the organization is thanking its loyal customers in the whole for providing the organization with the opportunity to be their IT developer and to push its operations amid the market challenges to become a successful investor in the ended year. Background Information Apple is a company...
6 Pages(1500 words)Case Study

Submitted to the Chairman

...The Federal Reserve Bank is responsible for establishing the monetary policy in the United s. The current chairman of the Fed is Ben Bernarke. Due to the influence the Fed has on the US economy it is important for business students to learn about the Federal Reserve. In order to be exposed to the type of decisions the Fed has to make on daily basis the website of the Fed has a game called “Fed Chairman Game.” The objective of the game is to be reelected chairman of the Fed. To win the game you must ensure that unemployment is below 4% and unemployment is below 7%. The purpose of this paper is to discuss the results of the “Fed Chairman Game.” In the game the player must...
2 Pages(500 words)Essay

...Deer Valley Lodge Number: Lecturer: Net Present Value Net present value (NPV) tries to compare the present value of cash flows now with the future cash flows. It is used to estimate the potentiality of a profit out of an investment made. It measures the total amount under which an investment is expected to raise based on the present value of its potential cash flows in comparison with the initial cost put into the project. The figures one gets will help inform if one is going to continue with the project or not, this profitability is shown by positive NVP. Part 1 Cost of running the lifts are $500 by 200 days equals to $100,000. The new capacity of the lifts is 300 skiers each day for 40 days and $55 is a ticket price; ...
1 Pages(250 words)Research Paper

...If men were seeking the Franchise-Jane Addams If men were seeking the Franchise-Jane Addams Through Jane Addams’ article If Menwere seeking the Franchise, it is clear that she presented quite a clever critique of the patriarchy which was centred on not only the dynamics associated with the gender roles in the industry but also in education and the government. She, therefore, argues that there are various justified reasons that women can give to men who are seeking the franchise by insisting that it is only through using the ballot that State duties can be shared between them. In the article, Jane Addams also further asserts that the women could validly object to extend...
1 Pages(250 words)Assignment
sponsored ads
Save Your Time for More Important Things
Let us write or edit the essay on your topic "Rift Valley and Jane Axtell or The Chairman" with a personal 20% discount.
GRAB THE BEST PAPER

Let us find you another Essay on topic Rift Valley and Jane Axtell or The Chairman for FREE!