Comments (0)
Add to wishlistDelete from wishlist
Cite this document
Summary
Businesses, whether for-profit or non-profit, that do not abide by necessary ethical conduct have only experienced their closure or downfall eventually. The same was the fate of the Angel Food Ministries in Georgia that was founded…
Download full paperFile format: .doc, available for editing
HIDE THIS PAPERGRAB THE BEST PAPER93.9% of users find it useful 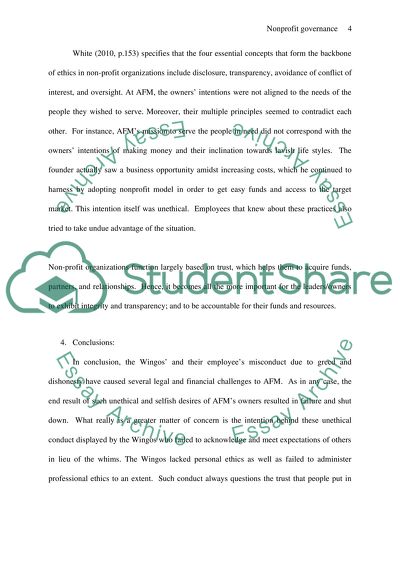 Running head: Non-profit Governance Non-profit Governance. Ethics in non-profit organizations Table of contents Introduction 3
2. About AFM 3
3. Breach of Ethics 3
4. Conclusion 4
5. References 5
1. Introduction:
Ethics are the quintessential requirements of any undertaking, whether
business, education, or any other profession. Businesses, whether for-profit or non-profit, that do not abide by necessary ethical conduct have only experienced their closure or downfall eventually. The same was the fate of the Angel Food Ministries in Georgia that was founded by Joe Wingo. This study is based on AFM’s dealings and the unethical practices followed by its owners which eventually resulted in its closure recently after being indicted by the Federal investigators of numerous accusations against its owners and some of its employees.
2. About AFM:
AFM was started by Joe Wingo, also a pastor, in 1994 to provide low-cost food for
the needy in the US. According to a report published by the Charity Watch (2012) of the American Institute of Philanthropy, AFM’s revenues in 2009 increased to $1.3 million, and that it sold food to everyone that wanted to buy it at low costs instead of selling food only to the people that were needy. After a four-year investigation, the federal investigators laid numerous accusations against the AFM owners that included Joe and his wife Linda Wingo, son Andy Wingo and an employee Harry Michaels. These accusations included fraudulent dealing and reporting of funds, funds diversion, unethical dealings with suppliers and vendors, using funds for personal gains and lavish life styles etc. These findings eventually resulted in shutting down of AFM besides prosecution of the accused.
3. Breach of Ethics:
White (2010, p.153) specifies that the four essential concepts that form the backbone of ethics in non-profit organizations include disclosure, transparency, avoidance of conflict of interest, and oversight. At AFM, the owners’ intentions were not aligned to the needs of the people they wished to serve. Moreover, their multiple principles seemed to contradict each other. For instance, AFM’s mission to serve the people in need did not correspond with the owners’ intentions of making money and their inclination towards lavish life styles. The founder actually saw a business opportunity amidst increasing costs, which he continued to harness by adopting nonprofit model in order to get easy funds and access to the target market. This intention itself was unethical. Employees that knew about these practices also tried to take undue advantage of the situation.
Non-profit organizations function largely based on trust, which helps them to acquire funds, partners, and relationships. Hence, it becomes all the more important for the leaders/owners to exhibit integrity and transparency; and to be accountable for their funds and resources.

4. Conclusions:
In conclusion, the Wingos’ and their employee’s misconduct due to greed and dishonesty have caused several legal and financial challenges to AFM. As in any case, the end result of such unethical and selfish desires of AFM’s owners resulted in failure and shut down. What really is a greater matter of concern is the intention behind these unethical conduct displayed by the Wingos who failed to acknowledge and meet expectations of others in lieu of the whims. The Wingos lacked personal ethics as well as failed to administer professional ethics to an extent. Such conduct always questions the trust that people put in non-profit organizations, which will eventually affect their efficient functioning too. Unethical conduct in non-profit organizations affects the entire organization.
References
White, D. (2010). The Four Pillars: The Backbone of Ethics at Nonprofits. In The Nonprofit
Challenge: Integrating Ethics into the Purpose and Promise of Our Nations Charities. New York: Palgrave Macmillan. (pp:153-170).
You Cant Have Your (Angel Food) Cake and Eat It Too. (2012, August). Charity Rating
Guide and Watchdog Report. www.charitywatch.org. Vol 61 (p.2, 23). Retrieved from http://www.homesforourtroops.org/site/DocServer/2012-08_Charity_Watch_Guide.pdf?docID=7521 Read More
Share:
Tags
Cite this document
(“Nonprofit Governance WA 2 Coursework Example | Topics and Well Written Essays - 500 words”, n.d.)
Nonprofit Governance WA 2 Coursework Example | Topics and Well Written Essays - 500 words. Retrieved from https://studentshare.org/miscellaneous/1603786-nonprofit-governance-wa-2

...?Diabetes WA Diabetes WA is a nonprofit organization which also works as a social service in Western Australia to fight and prevent diabetes. However, this particular paper will focus on creating awareness about the Diabetes WA in the local community with the proper marketing communication techniques and with proper advertising programs. Making the advertising campaign with the NDSS successful is the main objective of this paper. This paper will focus on the SWOT analysis for the organization itself and it will also focus on the effective advertising and promotional techniques which would boost up the brand building activity. The support of the NDSS is also shown...
6 Pages(1500 words)Research Paper

...are the important tools which must be used to reach the target group and for that $20,000 can be allocated. 2. Television: it is very wise to get some free advertising period or media space with the help of the government as this a social responsibility of the government to help the people to understand about the Diabetes. However, even after that there are many costs are related and they are campaign cost, development cost etc. for this another $ 20,000 can be allotted. 3. Online promotion: for the SEO with companies like Google, yahoo, facebook etc some amount must be allotted and it can be taken as the online promotion budget. $5000 can be taken as the onetime promotional cost. 4....
2 Pages(500 words)Research Paper

...1. If an endangered species such as the Santa Ana River Woolly star were to become extinct, what effects might this have on other species? A. In an ecosystem, when a species becomes extinct, the food chain becomes disturbed. The animals that predate on the species would be adversely affected as their food source is reduced, while those that the extinct species preys on will multiply in number utilizing scarce resources. The Santa Ana River Woolly star in particular is shrub that grows on loose soils. It provides food and shelter to insects and other small animals, on which larger animals prey on. Hence if it would become extinct, all other animals above it on the food chain would be affected. 2. What do the J- and S-...
7 Pages(1750 words)Essay

...425000 members in 2007. Through its various departments like Branch and Field Services, youth and collage department, Legal department, and Education department, the organization looks to improve the living conditions of all American citizens and provide them with the best facilities available. The Association also does strong lobbying in the US government that is something contrary to the theories discussed in the commentary. The NAACP is also run through a proper hierarchical management system and takes the ideology of business processes in its operations. The organization also had a rivalry with the IRS at the point of its tax-exempted status. The IRS contented that the organization has been actively taking part in...
2 Pages(500 words)Coursework

... Lecturer Paper Small size businesses require being actively sensitive to the volatile trading environment which affect the whole industry. As market grows, competitors emerge into the market whereas innovation shoots up the technology thus shifting the demand. This calls for continual watch out for ways to improving results of highly quality products and services that enabled the customer appreciate the value for money s/he has parted with. In this paper the focus will be based on drink and food industry that will need to develop and distribute such in a cost reduced manner for the maximization of profit. (Frewer 43) Customer needs and requirements; for instance, the drinks and food sold should reflect the taste and preference... Lecturer...
2 Pages(500 words)Assignment

...360 degree evaluation of a CEO because it violates the good governance when it is applied to a CEO. The CEO must be evaluated with unknown criteria. The board should not confront a CEO in front of all the board members which most often does not work. Each individual board member should separately evaluate the CEO with full authority (Carver & Carver, 2009). The ad hoc members should not observe or experience the evaluation of a CEO because these are the special groups which are outsourced and are not part of an organization. In that case the assessment would not be accurate and there are chances that the assessment process would not according to company’s criteria. Lastly, the Board should not assign the task to the...
2 Pages(500 words)Coursework

...WA # 3 During the 1960s, Diana Baumrind, a developmental psychologist carried out her child research study and came up with three parenting styles and the impact of these styles on children. The first parenting pattern that she identified is the permissive parenting style, which refers to a parent who responds to the behavior of a child in an accepting way that tends to be non-punitive. A permissive parent my ask his or her child how the child feels about the rules and take into consideration the input of the child. In addition, a permissive parent appeals to his or her child through the use of reason and does not limit the child in exploring the world. The freedom accorded to the child by the parent makes many people...
2 Pages(500 words)Assignment

...employees. She is allowed to access each report individually, but she does not have permission to know individual salaries. In other words, not properly understanding the implications of access to several data all at once can lead to semantic security breaches. 2. Reporting systems increase the risks of semantic security breaches because they give access to several reports simultaneously for reporting needs. Reporting systems do not realize that giving a bulk of information to one employee can result to the latter using them to deduce certain information that they are not allowed to know or access. These systems are important to getting work done, but they can offer access to too much information that can result to...
2 Pages(500 words)Assignment
sponsored ads
Save Your Time for More Important Things
Let us write or edit the coursework on your topic "Nonprofit Governance WA 2" with a personal 20% discount.
GRAB THE BEST PAPER

Let us find you another Coursework on topic Nonprofit Governance WA 2 for FREE!