Comments (0)
Add to wishlist Delete from wishlist
Cite this document
Summary
Such sites not only reveal the excellence of artists but also historical events and information that is captivating for the visitors. I got a…
Download full paper File format: .doc, available for editing
HIDE THIS PAPERGRAB THE BEST PAPER92.4% of users find it useful 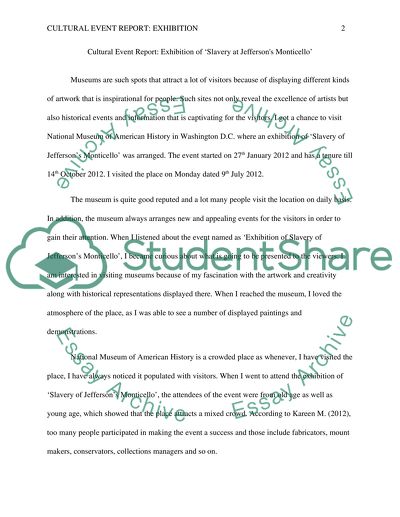 Cultural Event Report: Exhibition of ‘Slavery at Jeffersons Monticello’ No: Cultural Event Report:Exhibition of ‘Slavery at Jeffersons Monticello’
Museums are such spots that attract a lot of visitors because of displaying different kinds of artwork that is inspirational for people. Such sites not only reveal the excellence of artists but also historical events and information that is captivating for the visitors. I got a chance to visit National Museum of American History in Washington D.C. where an exhibition of ‘Slavery of Jefferson’s Monticello’ was arranged. The event started on 27th January 2012 and has a tenure till 14th October 2012. I visited the place on Monday dated 9th July 2012.
The museum is quite good reputed and a lot many people visit the location on daily basis. In addition, the museum always arranges new and appealing events for the visitors in order to gain their attention. When I listened about the event named as ‘Exhibition of Slavery of Jefferson’s Monticello’, I became curious about what is going to be presented to the viewers. I am interested in visiting museums because of my fascination with the artwork and creativity along with historical representations displayed there. When I reached the museum, I loved the atmosphere of the place, as I was able to see a number of displayed paintings and demonstrations.
National Museum of American History is a crowded place as whenever, I have visited the place, I have always noticed it populated with visitors. When I went to attend the exhibition of ‘Slavery of Jefferson’s Monticello’, the attendees of the event were from old age as well as young age, which showed that the place attracts a mixed crowd. According to Kareen M. (2012), too many people participated in making the event a success and those include fabricators, mount makers, conservators, collections managers and so on.
The first and foremost exhibit that attracted me the most was the greeting sculpture of Jefferson behind which, hundreds of names of enslaved persons were written under the title ‘Remembering those enslaved at Monticello’. The sculpture was itself a masterpiece as I noticed all the details of the sculpture. In addition, the museum also displayed a number of belongings of the enslaved residents of Mulberry Row such as knives, toothbrushes, pencils, writing slates and so on. There were also a number of paintings of enslaved people such as portrait of Ann-Elizabeth Fossett, Isaac Grander, Peter Fossett and so on. Various incidents and happenings were also painted and displayed by different artists.
Overall, the event was inspirational and fascinating, as people liked the displayed demonstrations a lot. I planned to make the visit based on the good reputation that the exhibition gained in newspapers and a common hype that spread everywhere. According to Caldwell (2012), the event was ‘subtle and illuminating’ and ‘groundbreaking’. I attended the event with two of my friends and all three of us roamed around the museum and commented on the sculptures, paintings and historical objects keeping their description in view. To me the tour was thought provoking as it informed all the visitors about Thomas Jefferson, his slaves, and the life styles, the slaves were made to live. Such events are enough informative and captivating because of the effort that is done to arrange them. I consider my visit as a fruitful one because I was able to see history through the eyes of artists and through old belongings of slave dwellers.
References
Caldwell, Leah. (March 19, 2012). The New and Improved Thomas Jefferson, Enlightened Slave Owner. The Awl. Retrieved on 28th August 2012 from http://www.theawl.com/2012/03/the-new-and-improved-thomas-jefferson-enlightened-slave-owner
M., Kareen. (May 16, 2012). Exhibition Installation of Slavery at Jefferson’s Monticello: Paradox of Liberty. NMAAHC. Retrieved on 28th August 2012 from http://nmaahc.si.edu/blog/sajminstallation Read More
Share:
Tags
Cite this document
(“: Cultural Event Report Essay Example | Topics and Well Written Essays - 500 words - 2”, n.d.)
Retrieved from https://studentshare.org/miscellaneous/1601933-cultural-event-report

Analysis of My Genetic Inheritance

How the media influeces society

The behaviour of the young towards luxury products

A Visit of Charity

... lingers after he had left. Jack Welch is vehemently against breaking up GE and wants its present structure as a conglomerate (Schwartz, NYT, p. 3) which he had termed as virtual surrender of the very values he held dear throughout his stint at G.E. if the company is broken up. During his time with G.E., it had as many as 17 different divisions which got cut down to only six today. But this masks the several hundred businesses under this neat categories, actually a mishmash of different product lines and services. The culture at G.E. today is vastly different than the one under Jack Welch. It could be described as kindler and gentler under Mr. Immelt with his leadership style as more subtle if compared to Jack Welchs often abrasive style...
12 Pages (3000 words) Report
sponsored ads
Save Your Time for More Important Things
Let us write or edit the essay on your topic ": Cultural Event Report" with a personal 20% discount.
GRAB THE BEST PAPER

Let us find you another Essay on topic : Cultural Event Report for FREE!