Comments (0)
Add to wishlistDelete from wishlist
Cite this document
Summary
This paper discusses three pieces of legislation that have been very crucial in the United States with regard to defining the rights of management and unions. More over, it accesses the roles they play and for what reason.
Labor laws have been present all over the worlds due…
Download full paperFile format: .doc, available for editing
HIDE THIS PAPERGRAB THE BEST PAPER95% of users find it useful 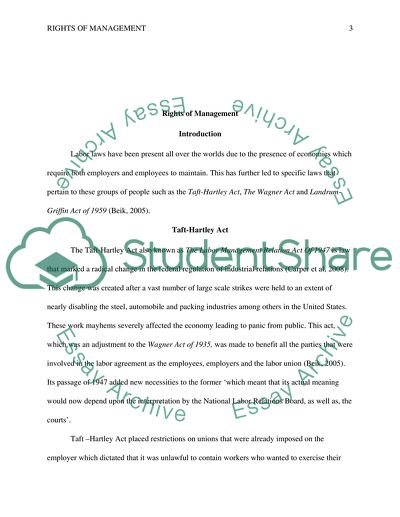 Extract of sample "Rights of Management"

Rights of Management This paper discusses three pieces of legislation that have been very crucial in the United s with regard to defining the rights of management and unions. More over, it accesses the roles they play and for what reason.
Rights of Management
Introduction
Labor laws have been present all over the worlds due to the presence of economies which require both employers and employees to maintain. This has further led to specific laws that pertain to these groups of people such as the Taft-Hartley Act, The Wagner Act and Landrum-Griffin Act of 1959 (Beik, 2005).
Taft-Hartley Act
The Taft-Hartley Act also known as The Labor Management Relation Act Of 1947 is law that marked a radical change in the federal regulation of industrial relations (Carper et al, 2008). This change was created after a vast number of large scale strikes were held to an extent of nearly disabling the steel, automobile and packing industries among others in the United States. These work mayhems severely affected the economy leading to panic from public. This act, which was an adjustment to the Wagner Act of 1935, was made to benefit all the parties that were involved in the labor agreement as the employees, employers and the labor union (Beik, 2005). Its passage of 1947 added new necessities to the former ‘which meant that its actual meaning would now depend upon the interpretation by the National Labor Relations Board, as well as, the courts’.
Taft –Hartley Act placed restrictions on unions that were already imposed on the employer which dictated that it was unlawful to contain workers who wanted to exercise their rights for self organization. (Dubinsky, 1994). Moreover, secondary strikes, boycotts and sympathy strikes especially those that were intended to influence employers, as opposed to those that the Union had contract with. Its first amendment entailed right to free speech that had been severely limited by the former laws, giving chances to employers to air their ideas on unionization only if the ideas are not incisive with threats or promises to employees. It also restricted the liability of employers based on managers’ actions to those who would be considered as a section of supervisors’ official duty. Additionally, the Act allowed states to enact right to work laws which illegalized the setting of union membership as employment condition although some states chose it while others bargained for changes to avoid conflict of interest.
According to Carper, et al. 2008, the Act made recommendation for the contract of labor to on either sides to bargain in good faith on the agreement based upon issues that related to employment contract. Since its enactment, this law has continued to guard employees, employers and the labor union. It also reduces the rigorousness and occurrences of labor relate strikes.
The Wagner Act
The Wagner Act of 1935 originally known as the National Labor Relation Act is one of the most imperative piece of labor legislation to be enacted in the United States. Its main purpose was to get rid of employers’ interference with the organization of the workers into unions (Dubinsky, 1994). It gives workers and unions the right to involve themselves in defensive activity and gain union representation. Its main grievances included the interference and coercing of employees while they exercised their rights such as the freedom to join or organize labor organization, the interfering with formation or running of labor organization, discrimination against employees in a bid to deject or persuade them to support the labor organization. More over, the Act fought against employees who had pressed charges or given testimony under the Act and the refusal to bargain collectively with council of employees (Beik, 2005).
Landrum-Griffin Act of 1959
The Landrum-Griffin Act of 1959 also referred to as the ‘Labor-Management Reporting and Disclosure Act’ (Carper, et al., 2008) is a supreme act in the federal law that deals with the liaison between a union and its members (Carper, et al., 2008). Its mandate is to grant certain rights to the union members plus protect their interest through promoting democratic measures within labor organization. This Act has established a Bill that ensures all rights for union members and other necessities surrounding the labor organization, union officers and employees are fully implemented. It has been noted to provide tools for union democracy and great government control over the affairs of the union and their providence (Dubinsky, 1994).
Conclusion
These three Labor Acts have been consistent in their sharing of rights and amendments that surround the employees, employers and the unions. In many case, they have been used to settle down the roar emerging from either sides.
References:
Beik, M. (2005). Labor Relations. Westport, Conn.: Greenwood Press.
Carper, D., et al. (2008). Understanding the Law. Mason, Ohio: Thomson/West.
Dubofsky, M. (1994). The State & Labor in Modern America. Chapel Hill U.A: Univ. of North Carolina Press. Read More
Share:
Tags
Cite this document
(“Rights of Management Essay Example | Topics and Well Written Essays - 500 words”, n.d.)
Rights of Management Essay Example | Topics and Well Written Essays - 500 words. Retrieved from https://studentshare.org/miscellaneous/1601764-rights-of-management

CHECK THESE SAMPLES OF Rights of Management

...?Prominent Groups and Individuals in African American Civil Rights Movement The Civil Rights Movement in the United s that peaked in the mid-1950s until the 1960s was focused on the struggle for racial equality. Prior to this, a large part of the country, particularly in the southern states, were still governed by what are known as Jim Crow laws. These laws are basically segregationist, depriving the African Americans with equal treatment in many areas of society. As the movement advanced, there were groups and individuals who became prominent. Many of these virtually became part of the core of the movement, rallying not only the Africa Americans, but also gaining the respect of the white majority in the...
4 Pages(1000 words)Essay

Past management of intellectual property rights

...?PAST MANAGEMENT OF INTELLECTUAL PROPERTY RIGHTS By Introduction Intellectually property rights refer to legal creations of the mind in which case there are exclusive rights. Under these laws, the owners of these rights are given exclusive rights to a variety of assets that are intangible such as musical, works of literature and art. Other intangible assets take the form of inventions, phrases, symbols as well as designs. The common types of intellectual property rights include patents, trademarks, copyrights and trade secrets. Intellectual property issues have not come from the recent past. It has taken centuries and...
10 Pages(2500 words)Essay

...in that there is no thought and contemplation of consequences involved. Mill, de Beauvoir and Gandhi all exhibit an indelible link between freedom and morality in their writings. The concept of morality has stringent human rights implications in that moral actions are actions undertaking utilizing the theoretical framework of right and wrong. Utilizing the concept of right and wrong, individuals are bounded to act in a manner such that no harm is brought to other individuals or their basic rights are not infringed upon. The concept of basic rights facilitates itself in the notion of human rights. Human rights are...
4 Pages(1000 words)Essay

...Full Examiner Explain and Evaluate Karl Marx's Critique of "Rights" The greatest to socialist thinkers of all times, Karl Marx is the founder of many social concepts for humanity that have generated more questions than they have answered. Ingenious in his disposition, his major works were a consequence of the Philosophy of Hegel, wherein he commented upon the concept of 'rights'. Marx argues the need for man to explore himself, within himself, Marx is of the opinion that it is futile for man to search here and there as all the answers and solutions lie within him. "Man, who looked for a superhuman being in the fantastic reality of heaven and found nothing there but the reflection of himself, will no longer be disposed to find... counter...
2 Pages(500 words)Essay

...HUMAN RIGHTS AND POLITICAL RIGHTS This paper has been written on basis of the works done by Simone deBeauvoir, JohnStuart Mill and some of the political writings by Mohandas Karamchand Gandhi. The reviews of above mentioned authors have been taken into consideration while preparing this paper. The human and political rights are the important aspects in today’s social life. Every human being has been provided with some basic fundamental rights by their governments to exist in society, which he/she has to follow. Then there are political rights that are used to protect basic fundamental rights. The paper presents the...
4 Pages(1000 words)Essay

Paraphrase creditor rights, remedies, and insurance as a component of risk management

...Law Law According to common jurisdictions, creditor rights can be defined as a set of bureaucratic necessities which are designed to protect a creditor’s ability to collect owed money (Miller, 2011). However, the necessities vary according to various jurisdictions. The remedies are also interrelated to the debtors. On the other hand, insurance can be defined as risk management strategies aimed at hedging against a loss (Dickson, 1960). All these three factors are considered components of risk management. This paper will discuss these issues pertaining to the scenario given in the details. The scenario given involves Eagle Sales Company who owned a warehouse after obtaining a mortgage...
2 Pages(500 words)Essay

Paraphrase creditor rights, remedies, and insurance as a component of risk management

... considering the case of Charlotte and Sarah, it is vital to understand the level of privacy that should be protected when disclosing any information publicly. Privacy signifies the right to protect individual’s independence, self-respect and truthfulness. It is also regarded as the right to protect a person from disruptions of individual life. The right to privacy comprise the regulations for governing the assortment and management of personal information. However, at times, right of privacy come in conflict with freedom of expression and freedom of information. In the UK, privacy right is protected by ‘right to confidence’ law and by the ECHR as well [4] (The Law School, 2012). Article 8, of Human Rights Act of the ECHR, states... ...
10 Pages(2500 words)Essay

... should only rotate around ensuring that the animal has good shelter, enough food, and is not overworked. In essence, these are the triad consisting of the best animal care and welfare. Any other form is a gross obsession, and the wildlife managers ought to put that in consideration to avoid immense conflicts that occur between them and the animal rights activists. Reference Wywialowski, A. P. (1991). Implications of the Animal Rights Movement for Wildlife Damage Management. Great Plains Wildlife Damage Control Workshop Proceedings, paper 7. Retrieved from DigitalCommons@University of Nebraska - Lincoln website: http://digitalcommons.unl.edu/gpwdcwp.... Animal Rights Affiliation Animal Rights The debate on...
1 Pages(250 words)Essay

...﻿Intellectual Property Rights And Management System In Saudi Arabia Abstract Intellectual Property (IP) laws grant certain exclusive rights to individuals or organisations for a variety of intangible goods that have been developed or engineered by those respective individuals or organisations. The development of IP laws and regulations is essential for the economic development of high-tech industries, such as software engineering or biotechnology, to name a few, that produce complex goods with high development and design costs and are generally considered to be intellectual property. In order to sustain growth in these fields and encourage international business collaboration,...
18 Pages(4500 words)Case Study
sponsored ads
Save Your Time for More Important Things
Let us write or edit the essay on your topic "Rights of Management" with a personal 20% discount.
GRAB THE BEST PAPER

Let us find you another Essay on topic Rights of Management for FREE!