Report on the Religious Life of Planet Earth - Essay Example

Comments (0)
Add to wishlistDelete from wishlist
Cite this document
Summary
I was very curious to visit planet earth to find out the religious nature of the people of planet earth, given its significance to our people and my reporting job back to my seniors. The vast scope of the issue at hand required me to decide some criteria to check the religious…
Download full paperFile format: .doc, available for editing
HIDE THIS PAPERGRAB THE BEST PAPER92.6% of users find it useful 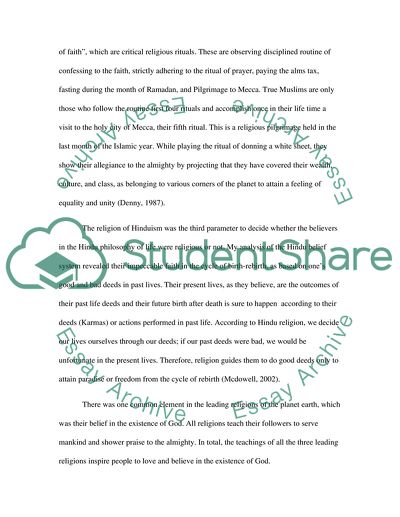 Extract of sample "Report on the Religious Life of Planet Earth"

Report on the Religious Life of Planet Earth I was very curious to visit planet earth to find out the religious nature of the people of planet earth,given its significance to our people and my reporting job back to my seniors. The vast scope of the issue at hand required me to decide some criteria to check the religious nature of various people; how they viewed religion and what meaning of the word “Religion” they derived. From my initial research, it was revealed that there were many different religions followed on earth but the leading religions represented by maximum number of people were three: Christianity, Islam, and Hinduism.
My research report about the religious dimensions led me to know the essence of religion, which was evoking of specific response over various aspects of life, taken to be pure as designed by traditional practices of religious bodies (Fisher, 2011). My criteria to examine the religiosity of the people on earth was philosophical related to the causal purpose of the universe; peoples’ adherence to religious rituals and moral code of conduct, as propounded by the leading religions.
Starting from Christianity, I examined the people believing in this religion on the parameter of cause behind the creation of the cosmos. Christians believed that there is one supreme power governing the affairs of the universe. Human beings are the final product of the creator to live on the planet with love and justice. They believe that the purpose of their existence is to love and serve God (Christianity Human Nature, 2012).
My next stoppage to research and analyze the preaching of Islam revealed about the followers of Islam, the Muslims who adhere to five pillars of Islam, called the “pillars of faith”, which are critical religious rituals. These are observing disciplined routine of confessing to the faith, strictly adhering to the ritual of prayer, paying the alms tax, fasting during the month of Ramadan, and Pilgrimage to Mecca. True Muslims are only those who follow the routine first four rituals and accomplish once in their life time a visit to the holy city of Mecca, their fifth ritual. This is a religious pilgrimage held in the last month of the Islamic year. While playing the ritual of donning a white sheet, they show their allegiance to the almighty by projecting that they have covered their wealth, culture, and class, as belonging to various corners of the planet to attain a feeling of equality and unity (Denny, 1987).
The religion of Hinduism was the third parameter to decide whether the believers in the Hindu philosophy of life were religious or not. My analysis of the Hindu belief system revealed their impeccable faith in the cycle of birth-rebirth, as based on one’s good and bad deeds in past lives. Their present lives, as they believe, are the outcomes of their past life deeds and their future birth after death is sure to happen according to their deeds (Karmas) or actions performed in past life. According to Hindu religion, we decide our lives ourselves through our deeds; if our past deeds were bad, we would be unfortunate in the present lives. Therefore, religion guides them to do good deeds only to attain paradise or freedom from the cycle of rebirth (Mcdowell, 2002).
There was one common element in the leading religions of the planet earth, which was their belief in the existence of God. All religions teach their followers to serve mankind and shower praise to the almighty. In total, the teachings of all the three leading religions inspire people to love and believe in the existence of God.
References
Christianity Human Nature and the Purpose of Existence. (2012). Retrieved from Patheos.com website at
http://www.patheos.com/Library/Christianity/Beliefs/Human-Nature-and-the-Purpose-of-Existence.htm
Denny, F. (1987). The Realization of the Goal of Islam in Faithful and Observant Communal Life: The Five Pillars of Islam. Retrieved from MuslimGateway.com website at http://www.muslimgateway.com/library/rituals/
Fisher, M.P. (2011). Living Religions. Pearson Education.
McDowell, J. (2002). Handbook of Today’s Religions. Retrieved from Greatcom.org website at http://www.greatcom.org/resources/handbook_of_todays_religions/03chap01/default.htm Read More
Share:
Tags
Cite this document
(“Report on the Religious Life of Planet Earth Essay - 8”, n.d.)
Report on the Religious Life of Planet Earth Essay - 8. Retrieved from https://studentshare.org/miscellaneous/1600690-report-on-the-religious-life-of-planet-earth

“Report on the Religious Life of Planet Earth Essay - 8”, n.d. https://studentshare.org/miscellaneous/1600690-report-on-the-religious-life-of-planet-earth.
Comments (0)
Click to create a comment or rate a document

...? Religious Life on Planet Earth Insert Here Insert Your Affiliation Here Religious Life on Planet Earth As one scours the Earth from its stratosphere, the colors show the variety of geographical terrain and vegetation which influences life on earth. There are extremes of heat in some regions like the deserts, terrible cold in other regions, while some are most conducive to life due to the optimal temperature conditions needed for mammalian life, particularly the human species which seems to be the most intelligent and capable of religious thought on this planet. The geographical terrain, vegetation and population density have a direct impact on the cultural and social life of humans which indirectly shapes their religious school... on the...
3 Pages(750 words)Essay

...? Religious Life of Planet Earth Religious Life on Planet Earth Religion is viewed as the foundation of the existence of humanity.The act of religion is prevalent globally, whether the beliefs entail worshiping idols, meditation (Buddhism) or performing certain rituals (Jainism) among others (Pope, 1996). In the recent past, religion has become a topic of discussion for several decades. In fact, most individuals do not understand why it is beyond the scope of the intellect capacity of human beings. Recent research asserts that religion has been studied by scholars and scientists among other qualified...
3 Pages(750 words)Essay

...? Religious Life of Planet Earth First Affiliation Since time immemorial, there has always been a way through which people can give reverence to the Supreme Being whom they credit for their existence. In this same connection, the aspect of religion comes in. The true implication of religion means that it is a cultural and belief system, which is at times related to the moral value of people and their relation to religion (Brodd, 2003). On researching about whether the individuals on the planet are religious in nature, the answer, which can be given in this case, is that the people of the planet earth are...
3 Pages(750 words)Assignment

...? REPORT ON THE RELIGIOUS LIFE OF PLANET EARTH Introduction The topic on religion has tended to elicit a lot of controversy and confusion pertaining to its definition and core practices. To this end, some of the definitions accorded to religion normally exhibit deficiency in the belief systems that should constitute religion or exhibit ambiguity and vagueness whereby anything qualifies as religion (Bowker, 1997). Evidently, it is inherent within humankind to practice religion through the development of a belief pattern. Consequently, the best way to determine the practice of religion on Earth and its nature is through examining the basic characteristics of religion which may exhibit mutual connection with other belief system... purpose in...
5 Pages(1250 words)Essay

...? REPORT ON THE RELIGIOUS LIFE OF PLANET EARTH Introduction The concept on religion is understood to encompass a set of beliefs in relation to the nature, cause and purpose of the universe (Swatos & Kivisto, 998). This is more so when the creation of the universe is attributed to a supernatural entity or entities, and reverence is accorded through ritual activities. There are equally provisions for moral codes that oversee the conduct of humanity. Evidently, religion constitutes a multidimensional concept that integrates a person’s behaviors, identity and beliefs (Swatos & Kivisto, 998). To this end, a renowned reflection of religion is one which exhibits...
5 Pages(1250 words)Essay

...﻿Report on the Religious Life of Planet Earth Introduction People seek to make sense of life by determining what would make them understand themselves. In the quest to find this meaning, some would resort to some philosophy, others to arts and others, in fact the majority, would resort to some form of religion. Each of these religions represents a specific perception of life, expressed in its traditions, scriptures and teachings. Brahm (2005) refers to it as a collection of worldviews, belief systems and cultural systems that establish symbols relating humanity to spirituality and further to moral values. This...
3 Pages(750 words)Essay

...Is Earth A Religious Planet? [Academic Level] This paper is intended to present an examination whether humans in general are considered to be religious in the eyes of God. Although the plot of the essay is somewhat fictional in its setting, the facts to be presented must be based on truth. Therefore, the main purpose of this discussion is to give the real scenario or characteristics of a religious society based on some principles or set of standards. Weighing the real sense of being religious against the real characteristics of humans based on their behavior towards their home planet in general, will it appear that humans...
2 Pages(500 words)Assignment

Report on the religious life of planet earth

...Religious Life of Planet Earth RELIGIOUS LIFE OF PLANET EARTH Religion describes the tradition, practice and artifacts of a belief structure. Religious people have to participate in some activities such as communion, prayer and ritual practice. A number of religions place an emphasis on practice, while others emphasize belief. There are different meanings of the word religious. Religion usually relates humanity to moral values and spirituality. Religious tend to derive religious law, ethics or morality from their suggestions about human...
2 Pages(500 words)Assignment

...Religion on Earth "Report on the Religious Life of Planet Earth" Religion is an aspect of life that affects the lifestyle and beliefs of people who live in different parts of the planet. To determine whether the people who live in this planet are religious, it is extremely essential that one comes up with criteria to identify the tangible and the intangible signs and symbols, which indicate that people practice religious activities and rituals (Caputo, 2001). Further, the criteria will include of an analysis of the possibility of certain days of the week,...
2 Pages(500 words)Essay
sponsored ads
Save Your Time for More Important Things
Let us write or edit the essay on your topic "Report on the Religious Life of Planet Earth" with a personal 20% discount.
GRAB THE BEST PAPER

Let us find you another Essay on topic Report on the Religious Life of Planet Earth for FREE!