Comments (0)
Add to wishlistDelete from wishlist
Cite this document
Summary
For instance only a very few people would know the meaning of hell hath no fury like a woman scorned, it means we must be nice to women…
Download full paperFile format: .doc, available for editing
HIDE THIS PAPERGRAB THE BEST PAPER98.6% of users find it useful 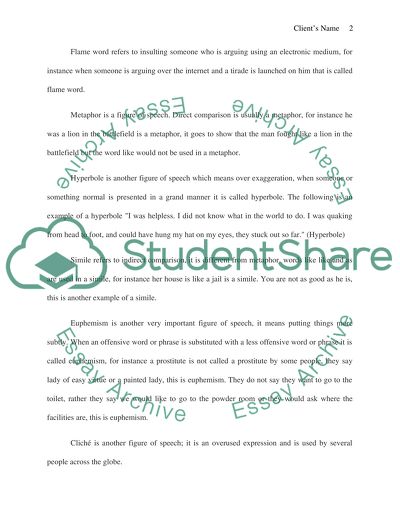 Download file to see previous pages Problem solving becomes easier when the analogy of an event is understood.
Metaphor is a figure of speech. Direct comparison is usually a metaphor, for instance he was a lion in the battlefield is a metaphor, it goes to show that the man fought like a lion in the battlefield but the word like would not be used in a metaphor.
Hyperbole is another figure of speech which means over exaggeration, when someone or something normal is presented in a grand manner it is called hyperbole. The following is an example of a hyperbole "I was helpless. I did not know what in the world to do. I was quaking from head to foot, and could have hung my hat on my eyes, they stuck out so far." (Hyperbole)
Simile refers to indirect comparison, it is different from metaphor, words like like and as are used in a simile, for instance her house is like a jail is a simile. You are not as good as he is, this is another example of a simile.
Euphemism is another very important figure of speech, it means putting things more subtly. When an offensive word or phrase is substituted with a less offensive word or phrase it is called euphemism, for instance a prostitute is not called a prostitute by some people, they say lady of easy virtue or a painted lady, this is euphemism. They do not say they want to go to the toilet, rather they say we would like to go to the powder room or they would ask where the facilities are, this is euphemism.
Colloquialism is “an informal expression that is more often used in casual conversation than in formal speech or writing.” (Colloquialism) He was dumped by her is an example of colloquialism, these were some very important figure of ...Download file to see next pagesRead More
Share:
Tags
Cite this document
(“Figurative Language versus Literal Language Essay - 10”, n.d.)
Figurative Language versus Literal Language Essay - 10. Retrieved from https://studentshare.org/miscellaneous/1600196-figurative-language-versus-literal-language

CHECK THESE SAMPLES OF Figurative Language versus Literal Language

...? Figurative language versus literal language October 24, Figurative language versus literal language Every language comes with a plethora of ways to color a message that someone is trying to convey or else to provide a creative way to help prompt an understanding between people. This can be done whether the words are written or spoken. Unfortunately, if someone does not know how to properly use certain language devices, such as those that make up figurative speech, they risk confusing the person that they are trying to...
3 Pages(750 words)Essay

...?Assignment 2: Figurative Language versus Literal Language Language is used as the primary process to communicate with one another. There are many different forms of language, and the meaning can change depending on the situation used or way that it is worded. Two main forms of communication are figurative language and literal language. The former refers to a representation of something that may not actually be true but is either making a comparison or using different words to get a point across. The Merriam Webster dictionary defines figurative as “representing by a figure or resemblance” (“Figurative,” 2012). On the other hand, literal language is the complete opposite of figurative language because it means exactly what it says... out of...
4 Pages(1000 words)Essay

...Section/# Literal versus Figurative Language Regardless of how eloquent a can place his/her words on the paper, taken as a whole these words invariably fall into two distinct categories: literal or figurative. Each can be used to great effect in the correct setting; or, conversely, can be used in such a way as to irritate or confuse a reader in another setting. Understanding in what particular juncture one should employ literal versus figurative language is a skill that should be mastered in order to ensure that the desired effect of one’s language, both...
3 Pages(750 words)Essay

...?Figurative Language versus Literal Language Figurative Language versus Literal Language Idioms An idiom is a word or phrase in a language or dialect that does not refer to the literal language. Idioms can be defined as a phrase or collection of words whose individual word dictionary meaning is different from what is written. A good example of an idiom is “John Kicked the bucket”. Literally, one would understand the statement that John probably kicked a real bucket but idiomatically, the phrase means that...
3 Pages(750 words)Assignment

...?Figurative Language vs. Literal Language (Critical Thinking) The American language is a living, breathing, and ever evolving language. As such, it is composed of words, phrases, and sentences that find their origins in the most ancient of historical times with its meaning evolving over the years as people use the word for various purposes and to invoke various meanings. There can be figurative uses for the word, or even literal uses which manage to change the context of the word regardless of the word etymology. This paper will look into the etymology and meaning of 10 of the most popular words used in...
3 Pages(750 words)Essay

...Figurative Language vs. Literal Language Your School Department, This paper is a partial fulfillment for the subject ________, under Professor ________. Figurative Language versus Literal Language Learning a new language can be very tricky. One should be aware that words and expressions can be interpreted in various ways. When reading something for the first time, one reads it on one level, which is the literal level. The second level is the figurative level, in which things get a little complicated, especially if one is not a native...
4 Pages(1000 words)Essay

2 Pages(500 words)Admission/Application Essay
sponsored ads
Save Your Time for More Important Things
Let us write or edit the essay on your topic "Figurative Language versus Literal Language" with a personal 20% discount.
GRAB THE BEST PAPER

Let us find you another Essay on topic Figurative Language versus Literal Language for FREE!