Comments (0)
Add to wishlistDelete from wishlist
Cite this document
Summary
We have all, probably, been tempted, at one time or another, perhaps even encouraged, to do something at work to make ourselves look better, the books look better, or to stand out in the crowd. On more than one occasion those acts may not have been entirely ethical things to do…
Download full paperFile format: .doc, available for editing
HIDE THIS PAPERGRAB THE BEST PAPER94.6% of users find it useful 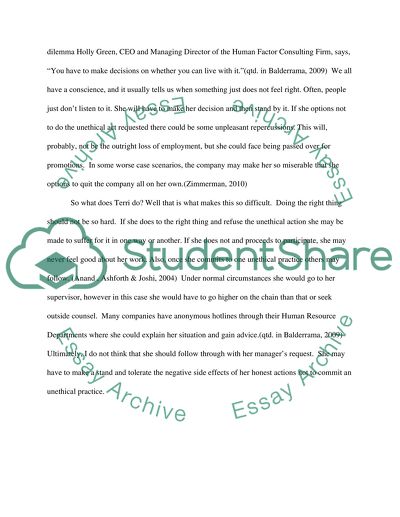 The Challenges of Being Ethical We have all, probably, been tempted, at one time or another, perhaps even encouraged, to do something at work to make ourselves look better, the books look better, or to stand out in the crowd. On more than one occasion those acts may not have been entirely ethical things to do. I could never bring myself to do anything, no matter what the potential reward, that was clearly dishonest or that would make me feel sorry that I had done it the next day. This is very much the kind of scenario that has been presented in the case of Terri Ronsin.
The physical results, if Terri should opt to do what her manager asked her to do, understating a few numbers, is, in fact, an unethical act. This would mean that when the mathematical calculations are tallied in December they will be synthesized and far less than a genuine reflection of company’s exact numbers. But the “Christmas Bonus” would be present just as the manager wishes and is accustomed to. There is no question that this company’s yearly tradition will provide a better portfolio, but results in a far lower that acceptable ethical standard for all those who participate.
The position that Terri is in is a difficult one. It is established that she is new to her position and eager to do the best possible job. Her manager asked her to change the numbers because the last person in her position had had no problem doing so. This directly reflects back to the questionable tactics of organizational socialization. She is presented with unethical tasks as if it common place and an everyday normality, and therefore acceptable. There is even a slight insinuation by the manager that is an expected part of her position. When faced with an ethical dilemma Holly Green, CEO and Managing Director of the Human Factor Consulting Firm, says, “You have to make decisions on whether you can live with it.”(qtd. in Balderrama, 2009) We all have a conscience, and it usually tells us when something just does not feel right. Often, people just don’t listen to it. She will have to make her decision and then stand by it. If she options not to do the unethical act requested there could be some unpleasant repercussions. This will, probably, not be the outright loss of employment, but she could face being passed over for promotions. In some worse case scenarios, the company may make her so miserable that she options to quit the company all on her own.(Zimmerman, 2010)
So what does Terri do? Well that is what makes this so difficult. Doing the right thing should not be so hard. If she does to the right thing and refuse the unethical action she may be made to suffer for it in one way or another. If she does not and proceeds to participate, she may never feel good about her work. Also, once she commits to one unethical practice others may follow. (Anand , Ashforth & Joshi, 2004) Under normal circumstances she would go to her supervisor, however in this case she would have to go higher on the chain than that or seek outside counsel. Many companies have anonymous hotlines through their Human Resource Departments where she could explain her situation and gain advice.(qtd. in Balderrama, 2009) Ultimately, I do not think that she should follow through with her manager’s request. She may have to make a stand and tolerate the negative side effects of her honest actions not to commit an unethical practice.
References
Anand , V., Ashforth, B. E., & Joshi, M. (2004). Business as usual: The acceptance and
perpetuation of corruption in organizations. Academy of Management Executive, 18(2),
40-41, 46-47. Retrieved from
http://www.econ.upf.edu/~lemenestrel/IMG/pdf/anand_et_al._ame_2004.pdf
Balderrama, A. (2009, August 10). When you dont trust your boss. Retrieved from
http://www.cnn.com/2009/LIVING/worklife/08/10/cb.can.not.trust.boss/index.html
Zimmerman, E. (2010, October 23). Does that request pass the smell test?. The New York Times.
Retrieved from http://www.nytimes.com/2010/10/24/jobs/24career.html Read More
Share:
Tags
Cite this document
(“Case study Example | Topics and Well Written Essays - 500 words - 24”, n.d.)
Case study Example | Topics and Well Written Essays - 500 words - 24. Retrieved from https://studentshare.org/miscellaneous/1599126-case-study