Business law - contracts, summary to UCC, and FIRAC on a case - Essay Example

Comments (0)
Add to wishlistDelete from wishlist
Cite this document
Summary
This is because the complaints that the company receives might not have emanated from Silvestri’s actions or performance. Probably, the predicaments might have yielded from other staffs that aided…
Download full paperFile format: .doc, available for editing
HIDE THIS PAPERGRAB THE BEST PAPER98.5% of users find it useful 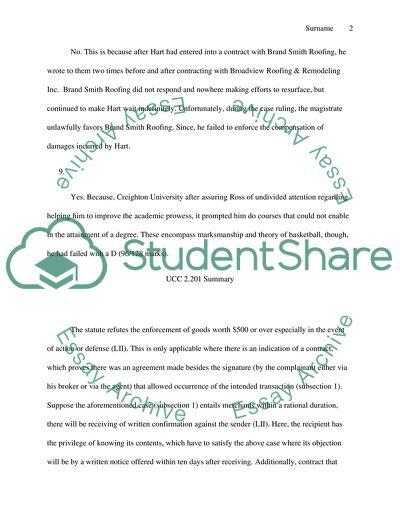 Extract of sample "Business law - contracts, summary to UCC, and FIRAC on a case"

Law 2. The Silvestri’s case is genuine besides the contracted deal with his employer. This is because the complaints that the company receives might not have emanated from Silvestri’s actions or performance. Probably, the predicaments might have yielded from other staffs that aided in resolving technical support under his authority or existed prior the term of employment. Hence, coincidentally erupted during his term of employment where the employer owing to the overwhelming cases assumed it was Silvestri’s failure. The employer in blaming the Silvestri accountable will be after one year or after the completion of one term, but in this case there no definite time. Besides, there is not evidence that can act as a proof.
3.
Yes, since Light did not produce the quality services, which they had agreed and contracted prior the start of the exercise. In addition, the liquidated damages were also evident in the contract, which they had instituted besides each swearing to fulfill.
3.
No. This is because after Hart had entered into a contract with Brand Smith Roofing, he wrote to them two times before and after contracting with Broadview Roofing & Remodeling Inc. Brand Smith Roofing did not respond and nowhere making efforts to resurface, but continued to make Hart wait indefinitely. Unfortunately, during the case ruling, the magistrate unlawfully favors Brand Smith Roofing. Since, he failed to enforce the compensation of damages incurred by Hart.
9.
Yes. Because, Creighton University after assuring Ross of undivided attention regarding helping him to improve the academic prowess, it prompted him do courses that could not enable in the attainment of a degree. These encompass marksmanship and theory of basketball, though, he had failed with a D (96/128 marks).
UCC 2.201 Summary
The statute refutes the enforcement of goods worth $500 or over especially in the event of action or defense (LII). This is only applicable where there is an indication of a contract, which proves there was an agreement made besides the signature (by the complainant either via his broker or via the agent) that allowed occurrence of the intended transaction (subsection 1). Suppose the aforementioned case (subsection 1) entails merchants within a rational duration, there will be receiving of written confirmation against the sender (LII). Here, the recipient has the privilege of knowing its contents, which have to satisfy the above case where its objection will be by a written notice offered within ten days after receiving. Additionally, contract that does not effectively satisfy the necessities of the subsection (1), but is legitimate in other respects is enforceable (LII).
Work Cited
Legal Information Institute - LII. U. C. C.: 2-201 Formal Requirements; Statute of Frauds. n.d. Web. 12Th June 2012.
Read More
Share:
Tags
Cite this document
(“Business law - contracts, summary to UCC, and FIRAC on a case Essay”, n.d.)
Retrieved from https://studentshare.org/miscellaneous/1598598-business-law-contracts-summary-to-ucc-and-firac-on-a-case

(Business Law - Contracts, Summary to UCC, and FIRAC on a Case Essay)
https://studentshare.org/miscellaneous/1598598-business-law-contracts-summary-to-ucc-and-firac-on-a-case.

“Business Law - Contracts, Summary to UCC, and FIRAC on a Case Essay”, n.d. https://studentshare.org/miscellaneous/1598598-business-law-contracts-summary-to-ucc-and-firac-on-a-case.
Comments (0)
Click to create a comment or rate a document

CHECK THESE SAMPLES OF Business law - contracts, summary to UCC, and FIRAC on a case

...? Business Law- Contracts and Leases; UCC Affiliation Contracts and Leases in Common Law and UCC According to Bagley and Dauchy ), a contract is an agreement between two or more parties which can be legally enforced. The parties can either be individuals, companies or organizations. A Lease of property is an example of a business contract. Contracts create an obligation of doing or not doing particular things, and they are important to the community because they facilitate cooperation and trust. Business contracts are one...
4 Pages(1000 words)Essay

HR Strategic Plan for the company I work for thhe company

Contracts and Leases in Common Law and UCC

...﻿Contracts and Leases in Common Law and UCC According to Bagley and Dauchy (2012), a contract is an agreement between two or more parties which can be legally enforced. The parties can either be individuals, companies or organizations. A Lease of property is an example of a business contract. Contracts create an obligation of doing or not doing particular things, and they are important to the community because they facilitate cooperation and trust. Business contracts are one of the most popular legal transactions that people get involved in when running businesses....
4 Pages(1000 words)Essay

...Assignment Case Duncan vs. Union Pacific Facts: A Union Pacific train struck an automobile at a railroad crossing killing all four occupants of the car. The heirs of the accident victims sued Union Pacific for maintaining the crossing, negligently. Patrick Duncan was one of the victims who died at a railroad crossing. Union Pacific successfully moved summary judgment prompting one of the plaintiffs, Lewis Duncan, heir of Patrick Duncan to appeal. Issue: Whether the Union Pacific was negligent? Rule Tort of negligence seeks to prevent the conduct that fall below standard behaviors established that the law has established to protect others from unreasonable risk of harm. Therefore, a...
4 Pages(1000 words)Essay

...Contract law- Contract problems, FIRAC case, and short summary This paper seeks to explore legal concepts in contract law. The paper will analyze case studies, summarize a case, and discuss concepts of parole evidence rule. Cunningham vs. Driscoll Facts Cunningham and Driscoll entered into a contract of sale of soybeans a total price of $ 22000. Cunningham proceeded to send a purchase confirmation to Driscoll but Driscoll did not respond. Two months later, Driscoll refused to honor the arrangement forcing Cunningham to make alternative purchases at higher prices. Cunningham has sued for breach of contract but Driscoll argues for summary judgment on ground that the contract did not satisfy statute of fraud. Issue The issue... , was entitled...
3 Pages(750 words)Assignment

Business law - short answer about contract, and FIRAC a case

...Business law Law defines a set of rules that regulate interaction between members of the society. It outlines rights and obligation of parties in relations. This paper seeks to explore cases under law of contract. Douglas vs. special products Facts Douglas entered into a contractual agreement with Page Wilson under ‘non-compete’ provisions. Acquisition of Page Wilson resulted to ownership by Special products. Special Products, after Douglas’ resignation, filed a suit against him for soliciting the organization’s clients but he argued that there was no ‘non-compete’ contract. Issue The issue to be determined is whether a...
2 Pages(500 words)Assignment

Contracts and The UCC

...in his/her state before selling any good as UCC is a set of nine articles consisting of certain laws that leads to the sale and rent of goods, flexible instruments, fund transfers, bank deposits, letters of credit, warehouse receipts, wholesale issues, bills of lading, security of investment and perfectly protected business. So for the smooth running of all these aspects, Manager must be aware of complete picture of UCC in his/her state. References: Business Contracts - How to Read Business Contracts. (n.d.). About.com US Business Law / Taxes. Retrieved May 5, 2014,...
1 Pages(250 words)Assignment

Contracts and The UCC

...and Investment Securities etc (Georgia, 2010). The UCC implementation in its modified form has many benefits for the citizens of State of Georgia (Flinn, 2013). This act may give right to the buyer to reject the goods at the time of contract if they do not match the expectation of the buyer. Another advantage which any buyer can enjoy is the term of warranty from the seller side. The seller will be liable to repair the product if it is damaged within the warranty period. In some situations, the buyer may even have the right to revoke or even cancel the order if he is not satisfied with the product. All of these terms and conditions are really beneficial for the clients and the residents of the State of...
1 Pages(250 words)Assignment

...UCC and Common Law UCC and Common Law Comparison and Contrast Uniform Commercial (UCC) and the common law are used in the United States of America to govern contracts. The former law deals with commodities and tangible goods while the latter apply to contracts in services, intangible assets, employment, insurance and real estate (Miller & Jentz, 2012). The following is a review of case scenarios and questions associated with them. Scenario 1: Gap Filling Rule (Cereal, Inc) In this scenario, Grocery Inc has a written agreement with Cereal Inc on the monthly purchase of 20...
2 Pages(500 words)Essay
sponsored ads
Save Your Time for More Important Things
Let us write or edit the essay on your topic "Business law - contracts, summary to UCC, and FIRAC on a case" with a personal 20% discount.
GRAB THE BEST PAPER

Let us find you another Essay on topic Business law - contracts, summary to UCC, and FIRAC on a case for FREE!