Comments (0)
Add to wishlistDelete from wishlist
Cite this document
Summary
Soon after the end of World War II, the world had seen a glimpse of what the nuclear arsenal would bring to it; devastation, destruction and total annihilation. United States use of nuclear arms over Hiroshima and Nagasaki opened the eyes of the world and made it apparent that…
Download full paperFile format: .doc, available for editing
HIDE THIS PAPERGRAB THE BEST PAPER91.4% of users find it useful 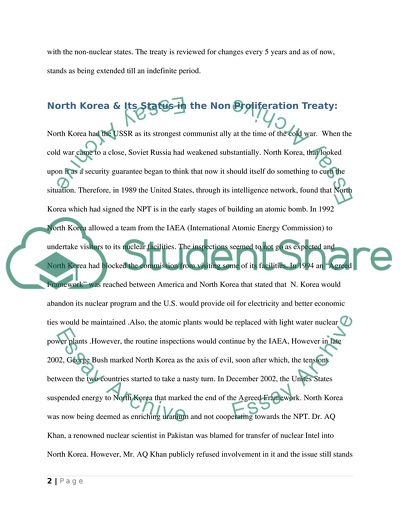 Download file to see previous pages A plan offered by the United States in 1946 also proposed that all nuclear arms and technology come under international control and ownership.
However, the post World War efforts did not seem to work out too well and it was later on that countries started to pledge allegiance to the NPT (Non Proliferation Treaty) which kicked off in 1968 and became effective in 1970. A list of around 190 countries are signatory to the treaty. The NPT rests on the premise that the non-nuclear nations would agree to never pursue any sort of acquisition of nuclear arsenal whereas the nuclear weapon state would share the benefits of it with the non-nuclear states. The treaty is reviewed for changes every 5 years and as of now, stands as being extended till an indefinite period.
North Korea had the USSR as its strongest communist ally at the time of the cold war. When the cold war came to a close, Soviet Russia had weakened substantially. North Korea, that looked upon it as a security guarantee began to think that now it should itself do something to curb the situation. Therefore, in 1989 the United States, through its intelligence network, found that North Korea which had signed the NPT is in the early stages of building an atomic bomb. In 1992 North Korea allowed a team from the IAEA (International Atomic Energy Commission) to undertake visitors to its nuclear facilities. The inspections seemed to not go as expected and North Korea had blocked the commission from visiting some of its facilities. In 1994 an “Agreed Framework” was reached between America and North Korea that stated that N. Korea would abandon its nuclear program and the U.S. would provide oil for electricity and better economic ties would be maintained .Also, the atomic plants would be replaced with light water nuclear power plants .However, the routine inspections would continue by the IAEA, However in late 2002, George Bush ...Download file to see next pagesRead More
Share:
Tags
Cite this document
(“Are International institutions effective in solving collective Research Paper”, n.d.)
Are International institutions effective in solving collective Research Paper. Retrieved from https://studentshare.org/miscellaneous/1596056-are-international-institutions-effective-in-solving-collective-problems-case-study-of-treaty-on-the-non-proliferation-of-nuclear-weapons-and-north-koreas-nuclear-crisis

The attempts by foreign investments to penetrate China’s market have proven futile in the past especially due to the conservative nature of the inhabitants. China is a strict country when it comes to culture and cultural interaction. For ex...
7 Pages(1750 words)Coursework

Justine could either claim under “like work,” “work rated as equivalent,” or “work of equal value.” A claim under the “like work” provision of the Equal Pay Act 1970 is laid down in s 1(2...
9 Pages(2250 words)Case Study
sponsored ads
Save Your Time for More Important Things
Let us write or edit the research paper on your topic "Are International institutions effective in solving collective Problems Case study of Treaty on the Non-Proliferation of Nuclear Weapons and North Korea's Nuclear crisis" with a personal 20% discount.
GRAB THE BEST PAPER

Let us find you another Research Paper on topic Are International institutions effective in solving collective Problems Case study of Treaty on the Non-Proliferation of Nuclear Weapons and North Korea's Nuclear crisis for FREE!