To CASE A HYPERTENSION - Essay Example

Comments (0)
Add to wishlistDelete from wishlist
Cite this document
Summary
Dr Ally is a 49 year old professor who has been diagnosed and treated with essential hypertension 12 medication last year because he was feeling just fine. In addition, he was very busy with work and thus felt tired after work and developed dyspnea while climbing the stairs. As…
Download full paperFile format: .doc, available for editing
HIDE THIS PAPERGRAB THE BEST PAPER91.3% of users find it useful 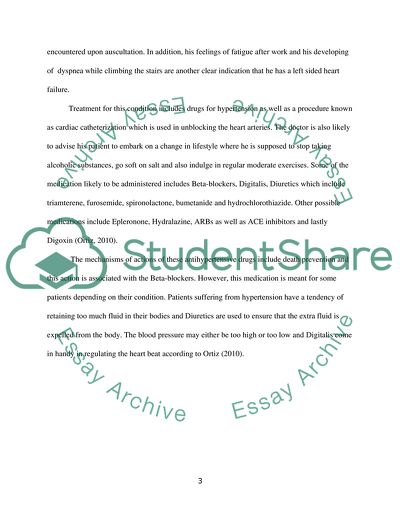 Extract of sample "To CASE A HYPERTENSION"

Running Head: Case A Hypertension Inserts His/her Inserts Grade Inserts 18, April, 2012
Hypertension case study
Dr Ally is a 49 year old professor who has been diagnosed and treated with essential hypertension 12 medication last year because he was feeling just fine. In addition, he was very busy with work and thus felt tired after work and developed dyspnea while climbing the stairs. As indicated by the case study, he suffers from mild hypertension otherwise known as uncomplicated hypertension. His blurred vision, dizziness and severe nose bleeding can be seen to be a result of the high blood pressure levels detected by his doctors which stand at 180/110. His doctor also found rales of crackles on his chest upon auscultation and this poses a risk as Dr Ally may suffer a heart failure which is his main problem. This is the reason why the doctor ordered him to take some rest and restart his high blood pressure medication to curb the impending condition (Kataoka and Matsuno, 2008).
According to the case study, Dr. Ally is undergoing pathophysiological changes in his eyes and heart owing to the fact that he recently suffered a bout of epistaxis which refers to severe nose bleeding, dizziness and a blurred vision. For instance, the blurry vision can be attributed to damaged blood vessels otherwise referred to as retinopathy and if left untreated this could result to blindness. On the other hand, the impending heart failure could be caused by damaged arteries and this could be fatal (U.S. National Library of Medicine, 2012).
According to the doctor, the patient could have developed congestive heart failure (CHF) due to hypertension, a condition that causes the heart to weaken thus rendering it unable to carry out its pumping activities normally. In this case, the patient could be suffering from left sided heart failure and this can be explained by the rales of crackles on his chest which the doctor encountered upon auscultation. In addition, his feelings of fatigue after work and his developing of dyspnea while climbing the stairs are another clear indication that he has a left sided heart failure.
Treatment for this condition includes drugs for hypertension as well as a procedure known as cardiac catheterization which is used in unblocking the heart arteries. The doctor is also likely to advise his patient to embark on a change in lifestyle where he is supposed to stop taking alcoholic substances, go soft on salt and also indulge in regular moderate exercises. Some of the medication likely to be administered includes Beta-blockers, Digitalis, Diuretics which include triamterene, furosemide, spironolactone, bumetanide and hydrochlorothiazide. Other possible medications include Epleronone, Hydralazine, ARBs as well as ACE inhibitors and lastly Digoxin (Ortiz, 2010).
The mechanisms of actions of these antihypertensive drugs include death prevention and this action is associated with the Beta-blockers. However, this medication is meant for some patients depending on their condition. Patients suffering from hypertension have a tendency of retaining too much fluid in their bodies and Diuretics are used to ensure that the extra fluid is expelled from the body. The blood pressure may either be too high or too low and Digitalis come in handy in regulating the heart beat according to Ortiz (2010).
References
Kataoka, H. and Matsuno, O. (2008). Age related pulmonary crackles (Rales) in asymptomatic
cardiovascular patients. Annals of Family Medicine, 6(3): 239-245.
.
Ortiz, R. (2010). Heart Failure: Heart failure classifications. The San Diego Cardiac
Center, 4(7).
.
U.S. National Library of Medicine. (2012). Hypertension. Medline Plus, 42: 51-84.
. Read More
Share:
Tags
Cite this document
(“To CASE A HYPERTENSION Essay Example | Topics and Well Written Essays - 500 words”, n.d.)
To CASE A HYPERTENSION Essay Example | Topics and Well Written Essays - 500 words. Retrieved from https://studentshare.org/miscellaneous/1594570-to-case-a-hypertension

CHECK THESE SAMPLES OF To CASE A HYPERTENSION

... criteria guiding the definition of hypertension. Introduction of sphygmomanometer brought about the revelation that many of the renal, vascular and cardiac diseases are linked to elevated BP. BP is dependent on race and age, among many other factors. BP levels to be considered as elevated in comparison to normal, and the levels to be considered pathologic still remain arbitrary (Kotchen & Kotchen 2007). Prevalence of the disease To establish the prevalence of a condition, specific and precise definition of the condition is an essential prerequisite. Due to non-fulfillment of this criterion in cases of hypertension, an accurate value of prevalence is difficult to obtain. On the basis of a literature review of studies based on data... ...
4 Pages(1000 words)Essay

...? Hypertension s Hypertension is also referred to as high blood pressure. The condition has no symptoms and the major concern is that individuals who are having it remain unaware until the damage has occurred to the blood vessels. Hypertension can be normalized through various ways. For instance, having a healthy lifestyle can greatly help mitigate the advent of hypertension. Healthy life styles that can help reduce the condition include recreation, rest, low salt intake, proper diet, enrolling in an exercise program and minimizing on alcohol intake. Alternatively, there are anti-hypertensive’s drugs to normalize blood pressure levels. It’s very important...
4 Pages(1000 words)Research Paper

.... The final outcome of this development is the increased renal blood flow. The calcium channel blockers are found to have the immunosuppressive activity. Multiple intracellular functions are regulated by these calcium channel blockers. In all these three types of available drugs, the most common side effect is the renal function dysfunction and the mortality in few cases. (Vandeevoorde and Mitsnefes 2011). Hence the need for new drugs with fewer side effects is necessary. Although, the Angiotensin II receptors blockers, Angiotensin converting enzyme inhibitors and calcium channel blockers are providing good result in reducing hypertension, intensive researches are needed for finding a better solutions or...
8 Pages(2000 words)Assignment

...for research, due to their capability to give data for large number of people. Although the CCR can be applied for research, it is imperative to note that the information collected mainly for routine clinical rather than for studying purposes. Data value and dependability must be evaluated by researchers who use the facilities created in the CCR in order to avoid compromising the outcomes. There are many methods that are applied in research of hypertension cases in United States of America. The other categories of research methods include qualitative and quantitative approach which will be discussed in details later. A better comprehension of research perspective, through qualitative study, is therefore...
16 Pages(4000 words)Research Paper

...? Hypertension Outline A. Hypertension and its Symptoms My selected ailment is hypertension. It is defined as a condition associated with a conglomerate of diseases, characterized by systolic blood pressure of 140mmHg and above or diastolic blood pressure of 90mmHg and above, based on a mean of not less than two readings obtained at the two or more visits after conducting the initial screening (www.ash-us.org/). Hypertension is a symptomless condition, though the below could indirectly point towards the condition: a. Blood spots observed in the eyes b. Dizziness c. Facial flushing (www.heart.org) B. The Main Causes of Hypertension The principle causes...
4 Pages(1000 words)Essay

... the disease and empower them to improve their health and also contribute towards community health development. Arterial hypertension, generally referred to as high blood pressure (HBP), is a chronic disease that affects millions of people worldwide. High blood pressure is characterized by a systolic blood pressure (SBP) of 140mmHg or higher and a diastolic blood pressure (DBP) of 90mmHg or higher in adults. Arterial hypertension occurs due multiple factors such as overweight or obesity, alcohol, smoking, sedentary lifestyle, and high intake of sodium. In some cases they may also occur secondary to the onset of disorders such as those involving the adrenal gland. The presence of uncontrolled blood pressure could pose a risk factor... ). The...
3 Pages(750 words)Essay

...RUNNING HEAD: Hypertension Case Study on Hypertension Question Define persistent hypertension and identify 2 possible etiologies most likely for Mrs Girder? Hypertension is the persistent elevation of systolic or diastolic blood pressure (BP). For adults, BP greater than 140mmHg is referred as systolic and BP greater than 90mmHg is called diastolic (Delgado and Dart, 2004, p. 149). Hypertension can be either essential or secondary. In the first classification, common causes could be either “inherited” or “hyperten-sinogenic”. Inherited BP refers to family history of hypertension; whilst the latter commonly refers to...
5 Pages(1250 words)Essay

...HYPERTENSION affiliation Hypertension is a case where a person has high blood pressure. The blood pressure is highest when the heart pumps blood. When the heart relaxes, the pressure is lowest. The pressure, during rest is referred to as diastolic pressure. When pumping, the pressure is called systolic pressure. Hypertension is a huge problem in the USA the world general. The number of recorded deaths that were related to hypertension in 2011 in the USA was 27,853 (Deaths: Final Data for 2011, 2011). Hypertension cases are grouped into two: primary hypertension and secondary hypertension. Secondary hypertension is caused due to other medical conditions. Such conditions include kidney disorders, Cushing’s syndrome, thyroid gland... to...
5 Pages(1250 words)Essay
sponsored ads
Save Your Time for More Important Things
Let us write or edit the essay on your topic "To CASE A HYPERTENSION" with a personal 20% discount.
GRAB THE BEST PAPER

Let us find you another Essay on topic To CASE A HYPERTENSION for FREE!