Comments (0)
Add to wishlistDelete from wishlist
Cite this document
Summary
The state targets the protection of the public welfare in several aspects such as aversion of harm. The state emphasizes on the provision laws to govern the public in ways of ensuring safety (WTAO,…
Download full paperFile format: .doc, available for editing
HIDE THIS PAPERGRAB THE BEST PAPER92.1% of users find it useful 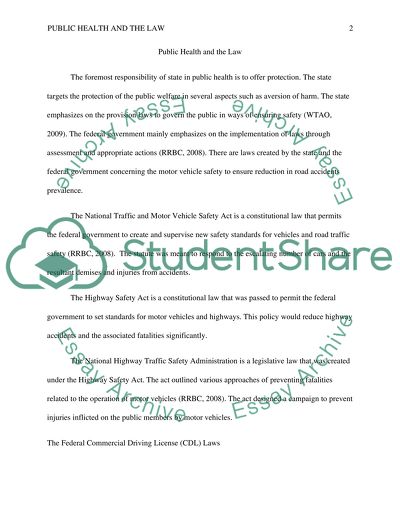 Extract of sample "Public health and the law"

Public Health and the Law Public Health and the Law The foremost responsibility of in public health is to offer protection. The state targets the protection of the public welfare in several aspects such as aversion of harm. The state emphasizes on the provision laws to govern the public in ways of ensuring safety (WTAO, 2009). The federal government mainly emphasizes on the implementation of laws through assessment and appropriate actions (RRBC, 2008). There are laws created by the state and the federal government concerning the motor vehicle safety to ensure reduction in road accidents prevalence.
The National Traffic and Motor Vehicle Safety Act is a constitutional law that permits the federal government to create and supervise new safety standards for vehicles and road traffic safety (RRBC, 2008). The statute was meant to respond to the escalating number of cars and the resultant demises and injuries from accidents.
The Highway Safety Act is a constitutional law that was passed to permit the federal government to set standards for motor vehicles and highways. This policy would reduce highway accidents and the associated fatalities significantly.
The National Highway Traffic Safety Administration is a legislative law that was created under the Highway Safety Act. The act outlined various approaches of preventing fatalities related to the operation of motor vehicles (RRBC, 2008). The act designed a campaign to prevent injuries inflicted on the public members by motor vehicles.
The Federal Commercial Driving License (CDL) Laws
The administrative law demands that all commercial drivers must possess a CDL. It considers serious commercial vehicle violations like exceeding speed limits and the main vehicle violations such as driving under the influence of alcohol (WTAO, 2009).
The laws on insurance
These laws ratified by the legislature necessitate the covers on motor vehicle against accidents and the relevant liabilities connected to the incidence of the insured peril. This ensures prompt treatment of passengers, pedestrians and rehabilitation of the vehicle.
These laws, the National Traffic and Motor Vehicle Safety Act, the Highway Safety Act, and the National Highway Traffic Safety Administration enabled several changes in the planning of motor vehicles and the highways (WTAO, 2009). The laws defined the relationship between the human, the motor vehicle and the highway to reduce the possibilities of crashing. The new safety features were included in vehicles such as rests, energy-absorbing steering wheels, shatter-resistant windshields and safety belts (WTAO, 2009). The situations of the roads were upgraded by incorporating well-designed delineated curves, the employment of road signs and utility poles, improved lighting, additional barriers separating the roads into different lanes and the application of guardrails. The highways therefore, offer enough space for driving hence minimizes the chances of crashing of vehicles, which has been a common source of fatal accidents. This has reduced the new designs of vehicles especially the seat belts reduce the magnitude of injuries that could lead to disability.
The Federal CDL Driving Laws has assisted in lowering the prevalence of accidents caused by alcoholism among the drivers. It has coined the standards that require proper skills, training and qualifications for CDL applicants (RRBC, 2008)
The passenger protection laws are administrative laws with varying requirements and are subject to penalties on non-compliance. These the safety-belt use laws that allow the traffic police to stop and check if there is a violation. The child-safety and booster seats are also in practice to protect the young during accidents (WTAO, 2009).
The federal and state governments have to take part in motor vehicle safety. Since 1925, the number of accidents and related fatalities increased tremendously until in 1966, when the situation was reversed upon the intervention of the federal and the state governments (RRBC, 2008).

CHECK THESE SAMPLES OF Public health and the law

...MPH 522 Public Health Law and Policy, Mod 2 Case Assignment Development of Public Health Policy Public Health Policy Throughout history we have experienced a dramatic increase in the prevalence of vulnerability in the United States. Although there are constant changes the health care needs of these vulnerable populations will place a major strain on the resources of medical services. It is important for our community to support the health and well-being of these individuals to prevent health disparities. This paper will discuss public...
4 Pages(1000 words)Essay

...of the ability to protect future employees from injury that they themselves may not protect themselves against. This is the way public health law works. The public, the law, as well as the courts have had some difficulty in determining what justice is when it comes to a case like this one (Kass, 2001). Does this also protect the company? The answer is of course yes. However, this again is a decision that is made for the largest number, not for the individual. It does not feel right to us because we have a tendency to look for justice in the sense of the single human instead of the group. It is also so easy to see that the company is not only concerned...
4 Pages(1000 words)Essay

...﻿ Public Health Law Reforms Reforms in the public health sector are long overdue. The public laws are faulted of not being sensitive to the growing public demands, they are considered archaic and needs agent restructuring to suit the current demands of the people (Novick, Morrow, & Mays, 2008). This agitation calls for reforms including flexibility of the statutes, moderation of the powers and provision of protection and non-discriminatory laws in the public health. The reforms are envisaged to enable public health agencies to identify resources and achievements requirement to enable this laws act as catalysts and not as impede on the public demands and interests (Novick, Morrow, & Mays, 2008... ...
1 Pages(250 words)Assignment

...Public Health Law in a new century Core Function of Public Health In the article, Gostin (2000) has considered the legislations governing public health in the 21st century. The health of its citizens is a subject of primary concern for the Government of all modern countries. However, most nations have private organizations functioning in the area of public health along with the governmental bodies. In such a situation, it is important to specify the authorities and the responsibilities of the government in maintaining the health of its citizens....
2 Pages(500 words)Essay

...Public Health and the Law Public Health and the Law In the United s of America, the empowerment of the federal government included the endorsement of the National Traffic and Motor Safety Act in1966. This act was one of the government’s initiatives developed to act in response to the increasing number of road accidents that killed individuals in the region (Mashaw & Harfst, 1990). Road accidents have significantly increased the fatalities, injuries, and death of individuals. The intervention of the federal government depicts that the federal government has stepped in to assist in aspects related to motor vehicle safety. This article will...
2 Pages(500 words)Essay

...Public Health and the Law of Public Health and the Law According to the Centre for Disease Control and Prevention (CDC) (2011), motor vehicle crashes are the leading cause of death in America, especially among those aged between 5 and 34 years. The CDC also points out that over 2.3 million passengers and adult drivers were treated in emergency departments as a result of injuries sustained in motor vehicle crashes in 2011. It is no doubt that the costs of crash-related deaths and injuries among passengers and drivers are extremely high. Motor vehicle crashes is one of the most serious public health problem...
2 Pages(500 words)Essay

...Public Health and the Law: Road Safety Road safety is one of the areas that need concerted efforts of both the federal and local authority. Since 1930s, government agencies have inexorably enacted sets of laws to ensure safety concerning road use. The laws cover licensing of vehicles and drivers, inspection and certification of road worthiness of vehicles, insurance coverage, the procedure to be followed in case of an accident, among others (Evans, 1991). The Federal and local States prohibit driving when under the influence of alcohol or any other drug that may influence the driver’s level of concentration. Any person who tests positive to alcoholic or...
2 Pages(500 words)Assignment

Decision Making As a Critical Part of Good Management

16 Pages(4000 words)Essay
sponsored ads
Save Your Time for More Important Things
Let us write or edit the assignment on your topic "Public health and the law" with a personal 20% discount.
GRAB THE BEST PAPER

Let us find you another Assignment on topic Public health and the law for FREE!