Comments (0)
Add to wishlistDelete from wishlist
Cite this document
Summary
The legal issues as to the rights and obligations of the two parties are well covered in the UCC. The code is a set of Acts that helps to harmonize the…
Download full paperFile format: .doc, available for editing
HIDE THIS PAPERGRAB THE BEST PAPER95.1% of users find it useful 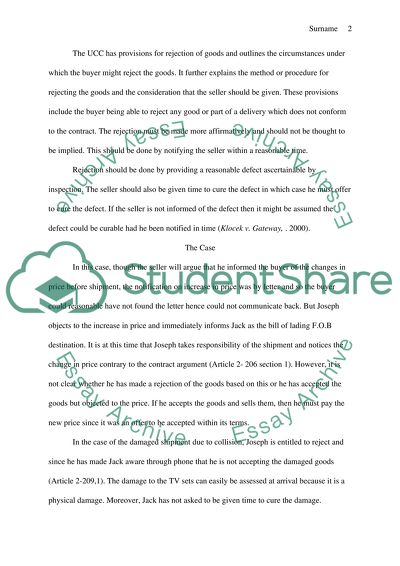 due Business Law (UCC) This is a case of business conflict in which the seller- a merchant is at conflictwith the buyer who is also a merchant. The legal issues as to the rights and obligations of the two parties are well covered in the UCC. The code is a set of Acts that helps to harmonize the business platform to ensure that none of the parties are unduly disregarded and prevent such unreasonable losses (Stone & Kristen, 2008 p14).
These business laws and provisions are harmonized so as to be applicable across most if not all the states in America. This is because business transactions tend to overlap in more than one state (Stone & Kristen, 2008 p26). A commodity maybe manufactured in one state, transported by a transport company from another state to a buyer in a totally different state.
The code as it is deals with personal and movable property and real property which is always static like homes. This is the more reason the code applies to the case of Jack and Joseph. The TV sets are movable personal property which has actually been shipped from one state to the other.
The facts of this case are in the disagreement on the terms of contract as well as the condition of the goods. The goods arrive with an increased price contrary to the initial agreement although there was an initial notification of 10 days to which no response of acceptance or rejection was offered. Further, the buyer rejects the second consignment due to deformations and notifies the seller as soon as possible.
The UCC has provisions for rejection of goods and outlines the circumstances under which the buyer might reject the goods. It further explains the method or procedure for rejecting the goods and the consideration that the seller should be given. These provisions include the buyer being able to reject any good or part of a delivery which does not conform to the contract. The rejection must be made more affirmatively and should not be thought to be implied. This should be done by notifying the seller within a reasonable time.
Rejection should be done by providing a reasonable defect ascertainable by inspection. The seller should also be given time to cure the defect in which case he must offer to cure the defect. If the seller is not informed of the defect then it might be assumed the defect could be curable had he been notified in time (Klocek v. Gateway, . 2000).
The Case
In this case, though the seller will argue that he informed the buyer of the changes in price before shipment, the notification on increase in price was by letter and so the buyer could reasonable have not found the letter hence could not communicate back. But Joseph objects to the increase in price and immediately informs Jack as the bill of lading F.O.B destination. It is at this time that Joseph takes responsibility of the shipment and notices the change in price contrary to the contract argument (Article 2- 206 section 1). However, it is not clear whether he has made a rejection of the goods based on this or he has accepted the goods but objected to the price. If he accepts the goods and sells them, then he must pay the new price since it was an offer to be accepted within its terms.
In the case of the damaged shipment due to collision, Joseph is entitled to reject and since he has made Jack aware through phone that he is not accepting the damaged goods (Article 2-209,1). The damage to the TV sets can easily be assessed at arrival because it is a physical damage. Moreover, Jack has not asked to be given time to cure the damage.
This case can be compared to Klocek v. Gateway, whose circumstances and ruling are closely related to this one. In this case I would rule on liability to Jack for breach of contract.
Work Cited
Stone, Bradford, and Kristen David Adams. Uniform commercial code in a nutshell. 7th ed. St. Paul, MN: Thomson/West, 2008. Print. Read More
Share:
Tags
Cite this document
(“Business law Essay Example | Topics and Well Written Essays - 500 words - 12”, n.d.)
Retrieved from https://studentshare.org/miscellaneous/1594474-business-law

...BUSINESS LAW Before the Uniform Commercial (UCC), and the Uniform Computer Information Transactions Act (UCITA), what was one of the first, andmost significant, of the U.S. governments attempts to promote uniformity in commercial laws from state to state? Historically, commercial laws have taken on new faces for centuries. However, the onset of the strengths of the U.S. Congress allows states to regulate commerce law. One of the first and most effective attempts at commerce regulation can be dated back to the Constitutional Convention described under specific origins in a proposal offered by Madison and John Tyler in the Virginia assembly that the...
2 Pages(500 words)Essay
sponsored ads
Save Your Time for More Important Things
Let us write or edit the essay on your topic "Business law" with a personal 20% discount.
GRAB THE BEST PAPER