Death of the salesman - Assignment Example

Comments (0)
Add to wishlistDelete from wishlist
Cite this document
Summary
Willy Loman is a patriarch of a middle-class family from Brooklyn and has travelled for more than 30 years in the coast of New England (Miller, n.p.). Willy…
Download full paperFile format: .doc, available for editing
HIDE THIS PAPERGRAB THE BEST PAPER91.6% of users find it useful 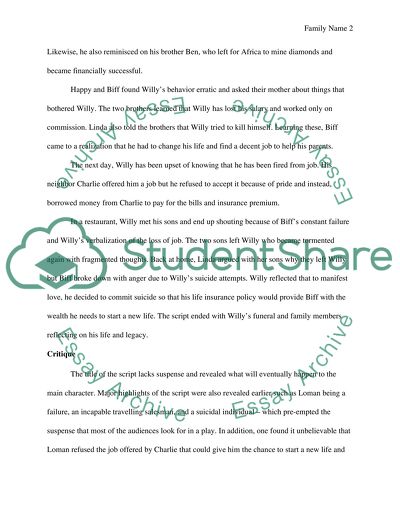 Extract of sample "Death of the salesman"

Death of the Salesman Synopsis Arthur Miller wrote the “Death of the Salesman” in 1949 narrating a sixty-three-year-old salesman named Willy Loman. Willy Loman is a patriarch of a middle-class family from Brooklyn and has travelled for more than 30 years in the coast of New England (Miller, n.p.). Willy is increasingly worried on how to make ends meet and on the extremely exhausting and unsatisfying job he has. The script reflected a lot of flashbacks, memories and reflective moments of Willy Loman.
Willy has two sons named Biff and Happy. Biff, the older son, has been toiling on farms and ranches and was always in argument with his father. He manifested an inability to maintain a 9-to-5 job to support his life and to meet the high expectations of Loman. On the other hand, Happy has a steady job but keeps on playing around with girls and has not gone far in business. The two brothers only came back home to visit their parents and stayed in the bedroom where they used to share as boys.
Restlessness and troubled thoughts preoccupied Willy when he returned home from an aborted sales trip. His wife, Linda, noticed Willy’s difficulties and urged him to speak to his boss and request a position that would not require travelling. Willy recalled the times when he was still a young father full of vitality, had an optimistic business outlook, and dreamed of success. Likewise, he also reminisced on his brother Ben, who left for Africa to mine diamonds and became financially successful.
Happy and Biff found Willy’s behavior erratic and asked their mother about things that bothered Willy. The two brothers learned that Willy has lost his salary and worked only on commission. Linda also told the brothers that Willy tried to kill himself. Learning these, Biff came to a realization that he had to change his life and find a decent job to help his parents.
The next day, Willy has been upset of knowing that he has been fired from job. His neighbor Charlie offered him a job but he refused to accept it because of pride and instead, borrowed money from Charlie to pay for the bills and insurance premium.
In a restaurant, Willy met his sons and end up shouting because of Biff’s constant failure and Willy’s verbalization of the loss of job. The two sons left Willy who became tormented again with fragmented thoughts. Back at home, Linda argued with her sons why they left Willy but Biff broke down with anger due to Willy’s suicide attempts. Willy reflected that to manifest love, he decided to commit suicide so that his life insurance policy would provide Biff with the wealth he needs to start a new life. The script ended with Willy’s funeral and family members reflecting on his life and legacy.
Critique
The title of the script lacks suspense and revealed what will eventually happen to the main character. Major highlights of the script were also revealed earlier such as Loman being a failure, an incapable travelling salesman, and a suicidal individual – which pre-empted the suspense that most of the audiences look for in a play. In addition, one found it unbelievable that Loman refused the job offered by Charlie that could give him the chance to start a new life and instead, computed the insurance amount that he could get and opted to commit suicide as a resolution of the conflict.
Conflicts between the father and son due to failure to achieve the American Dream is too superficial, indicating that familial conflicts were uprooted in material things and not in issues of love and support. Thus, Willy’s American Dream and perception of worth as a father was apparently based on consumerism, ambition, and social stature which encompassed the central theme of the script. Furthermore, thematic points also encompassed evading responsibility through suicide and inability of Willy to separate fantasy from reality. In general, the use of the term “tragic” in the play clearly depicts the life of Willy, as a salesman, whose life summarily ended to fulfill the dreams of a loved one.
Works Cited
Miller, Arthur. “Death of a Salesman.” Guthrie Theater. 2004. Web. April 15, 2012, from www.guthrietheater.org. Read More
Share:
Tags
Cite this document
(“Death of the salesman Assignment Example | Topics and Well Written Essays - 500 words”, n.d.)
Retrieved from https://studentshare.org/miscellaneous/1593635-death-of-the-salesman

CHECK THESE SAMPLES OF Death of the salesman

The death of the salesman

...The Death of a Salesman Many critics have considered “The death of the salesman” by Arthur Miller as a modern masterpiece in literature. This has caused numerous debates, which has stirred emotions among the readers and audiences of this play. Willy Loman is condemned as an outcast by the common trend among the readers. Therefore, the new generation of readers does feel nothing especially for the plight of characters like Willy Loman. The readers believe that the actions of Willy merit his destruction as portrayed in the play. The play offers more invigorating challenges in the academic sector, which is seen to be a pawn in the games of the academia (Eagleton p.106). In...
3 Pages(750 words)Essay

...? Review on “Death of a Salesman” by Arthur Miller. INTRODUCTION: The ever popular DEATH OF A SALESMAN lives in the hearts of every reader. We can ascribe the never failing success of this art piece to its structure. The current day screenplay in theatrical cinemas and dramas could well be felt even today in DEATH OF A SALESMAN. Depictions of flashbacks in today’s cinemas are backed by technological developments. But in 1949 when no such hi-tech nuances were available, flashback scenes were deployed in the same spirit as of today. That is, the soul of flashback cast was well realized and made use of by Miller. To put it in short, DEATH OF A SALESMAN was the Great Grand Father of all cinematic technologies. This structural strength... of the...
2 Pages(500 words)Essay

...Death of a Salesman In MLA Style 2 Thesis Death of a Salesman is Arthur Miller’s most famous work that addresses the agonizing conflicts within a family that are caused by some larger issues of the national values of America. The play scrutinizes the cost of blind faith in the American Dream caused by materialism that concealed the personal truth and moral vision of the original dream pronounced the founders of the country. This postwar American reading offers the effects of the said American Dream to the basic unit of society – family, which this paper will talk about. After this paper, we will understand the goal of Miller to depict his charges to the country to be...
3 Pages(750 words)Essay

Death of the Salesman and Glengarry Glen Ross

...? Section/# Arthur Miller’s Play “Death of a Salesman” as an Analysis of Middle Suburban Life and Meaning Although there is an unbelievably high number of individual themes with which to examine in Arthur Miller’s play “Death of a Salesman”, one would be remiss if they did not consider the strong autobiographical overtones that pervade the work. Naturally, in order to understand how the play itself is autobiographical, one must perform a great deal of background analysis into the early life of Arthur Miller. Once this has been completed, it is readily seen that Arthur Miller’s protagonist Willy Loman is likely a direct representation of his own father – Isadore Miller....
3 Pages(750 words)Essay

...? ‘Death of a Salesman A Research Essay Arthur Miller’s death of a Salesman’ is a renowned play of the modern times setin the backdrop of a generation chasing the ‘great American dream’. The piece of art inspires people to accept the reality that they can achieve their ambitions in life only through hard work. Out of the many themes like nostalgia ,opportunity, madness, gender differences, growth, capitalism and hazards of modernity, the most interesting and important one is ‘capitalism’ which leads to unprecedented consumerism and the growth of an infectious thought that money is important than everything else in life. Willy Lowman, the hero of the play is a victim of...
6 Pages(1500 words)Research Paper

... Renting Happiness Introduction Arthur Miller wrote a play in 1949 which not only became an American classic; it also made him a household name. Death of a Salesman is often seen as a vicious attack on the idea of the American dream, which according to Willy Loman, is the chance to become rich and famous without putting in any obvious hard work. Of course, Loman is seeking happiness with money but he does not put in the hard work or the effort which is required in order to obtain the happiness he desires. Interestingly, Miller pondered over several different names for the play before going with Death of a Salesman including The Inside of His Head (Wikipedia, 2006). Even from a cursory reading of the play, it is obvious... the money which...
5 Pages(1250 words)Essay

...﻿ Death of a Salesman Introduction: The work culture, loyalty and integrity for the organization and the related virtues are slowly and steadily disappearing from the American way of life, due to the pressures of the materialistic civilization. Greed and envy rule the society today and have taken over the concepts of justice and fairness. The society adores the achievers, no matter what the process of achieving is—the non-achiever, the one who suffers losses, is being destroyed by the inner conviction of uselessness. In “The Death of a Salesman,” the issue is how personal tragedy clubbed with cultural crises, proves destructive from all ends of the life of an individual. The question... is which...
9 Pages(2250 words)Research Paper

...Death of Salesman Death of a Salesman is a tragedy play that focuses on the difference between the dreams of the New York family and the realities of their lives. The play was featured in the 1940s with the aim of mocking the American dreams and of the competitions and the materialistic American society. The story focus on an average person named Willy Loman (Miller, 67). This man tries to hide his failures behind misunderstanding of splendor to focus and be successful. The play begins with a short story by Martin. His uncle, who was a salesman, later renewed his interests. Death of a Salesman depicts how the American...
2 Pages(500 words)Essay

4 Pages(1000 words)Essay
sponsored ads
Save Your Time for More Important Things
Let us write or edit the assignment on your topic "Death of the salesman" with a personal 20% discount.
GRAB THE BEST PAPER

Let us find you another Assignment on topic Death of the salesman for FREE!