Comments (0)
Add to wishlistDelete from wishlist
Cite this document
Summary
The patient’s long history of smoking would easily be associated with lung cancer. The patient displays multiple symptoms that are often associated with hypercalcemia that has developed as a complication of lung…
Download full paperFile format: .doc, available for editing
HIDE THIS PAPERGRAB THE BEST PAPER96.6% of users find it useful 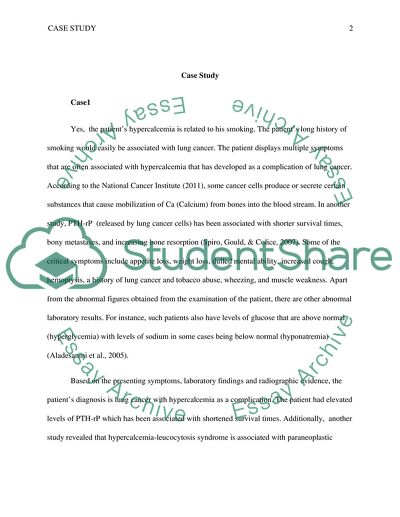 Case Study Case Study Case1 Yes, the patient’s hypercalcemia is related to his smoking. The patient’s long history of smoking would easily be associated with lung cancer. The patient displays multiple symptoms that are often associated with hypercalcemia that has developed as a complication of lung cancer. According to the National Cancer Institute (2011), some cancer cells produce or secrete certain substances that cause mobilization of Ca (Calcium) from bones into the blood stream. In another study, PTH-rP (released by lung cancer cells) has been associated with shorter survival times, bony metastases, and increasing bone resorption (Spiro, Gould, & Colice, 2007). Some of the critical symptoms include appetite loss, weight loss, dulled mental ability, increased cough, hemoptysis, a history of lung cancer and tobacco abuse, wheezing, and muscle weakness. Apart from the abnormal figures obtained from the examination of the patient, there are other abnormal laboratory results. For instance, such patients also have levels of glucose that are above normal (hyperglycemia) with levels of sodium in some cases being below normal (hyponatremia) (Aladesanmi et al., 2005).
Based on the presenting symptoms, laboratory findings and radiographic evidence, the patient’s diagnosis is lung cancer with hypercalcemia as a complication. The patient had elevated levels of PTH-rP which has been associated with shortened survival times. Additionally, another study revealed that hypercalcemia-leucocytosis syndrome is associated with paraneoplastic syndrome which is an indicator of poorer outcome in patients of lung cancer (Hiraki, et al., 2004). Therefore the prognosis is grave.
Case 2
The girl is suffering from Vitamin D deficiency which has resulted in rickets. According to Berman (2002), children who presented to the hospital with a deficiency of Vitamin D often have stunted growth with bow legs. In some cases, such patients will have a history of having the disease within their family. The laboratory test revealed that the girl had abnormally low levels of calcium in her blood (hypocalcemia). The patient has a history of taking mil, and this eliminates the possibility of the cause of the hypocalcemia being dietary. The follow up laboratory tests on 25-hydroxy Vit.D and 1, 25 dihydroxy Vit.D were to evaluate the amount of these substances in blood. These substances particularly 1, 25 dihydroxy Vit D is responsible for regulation of blood calcium levels (Children’s health, 2010) . It does this by stimulating the absorption of calcium from the intestines. Absence of these substances will mean that absorption of calcium at the intestine level will be impaired. In this case the levels of 1, 25 dihydroxy Vit. D was undetectable, with normal levels of 25 dihydroxy Vit.D indicating that the girl may have an impaired renal hydroxylation of 25 dihydroxy Vit.D (Berman, 2002). This is the patient’s inborn error in metabolism. In case the physician decided to withdraw Vitamin D treatment the patient will develop osteomalacia in her adulthood.
Case 3
Some of the causes of the thyrotoxicosis include autonomous hyperfunctional nodule, TSH- induced hyperthyroidism, functioning nodule, toxic adenoma, and post partum thryoiditis (Craig, & Stitzel, 2003). Other causes include transient hyperthyroidism, hyperemesis gravidarum (Hackley, 2006). Post partum thyroiditis is one of the most common causes of post partum thyrotoxicosis. And there is a need to differentiate it from graves disease its differential (Thyroid Australia, 2001). In the case of toxic n multinodular goiter, hyperthyroidism onset is gradual and the symptoms much milder when compared to graves disease. Plummer’s disease on the other hand is caused by autonomous adenomas in the thyroid gland. It is much rare (Becker, 2001).
References
Aldesanmi, O., Wen, X.J., & Nielsen, C. (2005). A 56 year old man with hypercalcemia. Cleveland Clinic Journal of Medicine, 72(8), 707-712.
Becker, K.L. (2001). Principles and practice of endocrinology and metabolism. New York, NY: Lippincott Williams & Wilkins pub.
Berman, A.F. (2002). The five minute herb and dietary supplement clinical consult. New York, NY: Lippincott Williams & Wilkins pub.
Children’s health (2010). Vitamin D deficiency. Retrieved from: http://www.healthofchildren.com/U-Z/Vitamin-D-Deficiency.html
Craig, C.R., & Stitzel, R.E. (2003). Modern pharmacology with clinical applications. New York, NY: Lippincott Williams & Wilkins. Pub
Hackley, B. (2006). Primary care of women: A guide for midwives & women’s health providers. Burlington, MA. Jones and Barlett Pub.
Hiraki, A., et al.(2004). Hypercalcemia-leucocytosis syndrome associated with lung cancer. Lung Cancer, 43(3), 301-307.
National cancer Institute (2011). Hypercalcemia. Retreived from: http://www.cancer.gov/cancertopics/pdq/supportivecare/hypercalcemia/Patient/page1/All Pages/Print
Spiro, S.G., Gould, M.K., & Colice, G.L.(2007). Initial evaluation of the pateint with lung cancer: Symptoms, signs, laboratory tests, and paraneoplastic syndromes. ACCP Evidence-Based Clinical Practice Guidelines. Chest Journal, 132(3), 149S-160S
Thyroid Australia (2001). Postpartum Thyroiditis. Retrieved from: http://www.thyroid.org.au/ThySoc/ThySocPPTD.html Read More
Share:
Tags
Cite this document
(“Case study Example | Topics and Well Written Essays - 500 words - 19”, n.d.)
Retrieved from https://studentshare.org/miscellaneous/1593432-case-study