Comments (0)
Add to wishlistDelete from wishlist
Cite this document
Summary
The official name of the country Egypt is Arab Republic of Egypt. The location of Egypt is towards the north eastern region of Africa. It is part of South West Asia. Cairo is the capital of Egypt. Foreigners…
Download full paperFile format: .doc, available for editing
HIDE THIS PAPERGRAB THE BEST PAPER91.4% of users find it useful 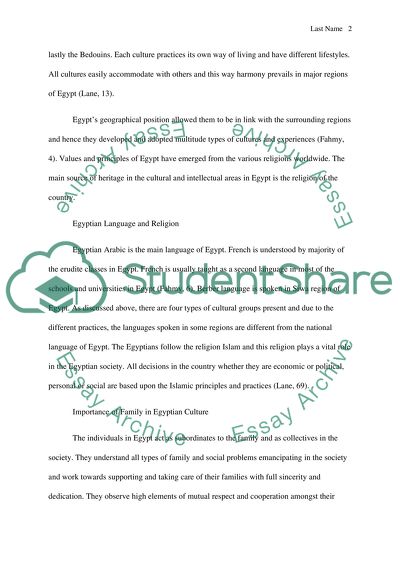 Download file to see previous pages Agricultural practices have emancipated in Egypt since five thousand years and due to this the Egyptian community is considered to be highly deep rooted. Maximum level of cooperation can be observed in the Egyptian community and they have a central government that deals with regulating all types of issues amongst the community. The Egyptians take special care of their community members and assist all members who need help and assistance (Fahmy, 10).
Egyptian people at the major level belong to the Eastern Hamitic Stock. There are four cultural groups present in Egypt. They are Egyptian peasants, the Copt, Nubians, and lastly the Bedouins. Each culture practices its own way of living and have different lifestyles. All cultures easily accommodate with others and this way harmony prevails in major regions of Egypt (Lane, 13).
Egypt’s geographical position allowed them to be in link with the surrounding regions and hence they developed and adopted multitude types of cultures and experiences (Fahmy, 4). Values and principles of Egypt have emerged from the various religions worldwide. The main source of heritage in the cultural and intellectual areas in Egypt is the religion of the country.
Egyptian Arabic is the main language of Egypt. French is understood by majority of the erudite classes in Egypt. French is usually taught as a second language in most of the schools and universities in Egypt (Fahmy, 6). Berber language is spoken in Siwa region of Egypt. As discussed above, there are four types of cultural groups present and due to the different practices, the languages spoken in some regions are different from the national language of Egypt. The Egyptians follow the religion Islam and this religion plays a vital role in the Egyptian society. All decisions in the country whether they are economic or political, personal or social are based upon the Islamic principles and practices (Lane, 69).
The individuals in Egypt act as ...Download file to see next pagesRead More
Share:
Tags
Cite this document
(“Present-Day Egyptian Culture Research Paper Example | Topics and Well Written Essays - 1500 words”, n.d.)
Retrieved from https://studentshare.org/miscellaneous/1592607-present-day-egyptian-culture

Marketing: Past, Present and Future

Marketing does not always refer to the activities that businesses undertake. It also needs to take into account the changes that take place in the firm’s economic, political, social and technological environment. This project attempts to bring out the manner in which the concept of marketing gets affected due to these reasons.

Today the world has opened up to a new arena of marketing technologies, twists, and techniques. What has gained the most significance today is online marketing. The online exuberance of marketing has somehow eroded the true meaning of marketing. Many have observed the marketing assets of tactics or ‘gimmicks’. Others have treated the words ‘marketing’, ‘sales&rs...
6 Pages(1500 words)Coursework
sponsored ads
Save Your Time for More Important Things
Let us write or edit the research paper on your topic "Present-Day Egyptian Culture" with a personal 20% discount.
GRAB THE BEST PAPER

Let us find you another Research Paper on topic Present-Day Egyptian Culture for FREE!